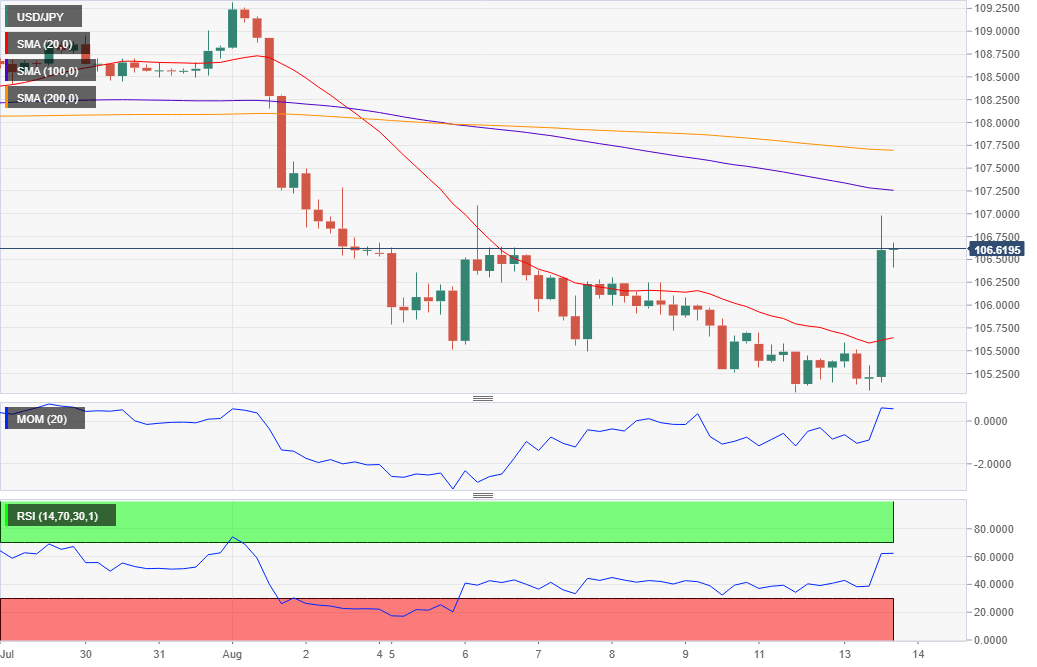 The Japanese yen was the worst performer against the dollar this Tuesday, with the USD/JPY pair jumping from the 105.00 region to 106.97 after the US government announced a delay in tariffs on some of Chinese imports until mid-December. Speculative interest abandoned safe-haven assets and rushed back into equities on the relief headlines, and despite no progress has been made in trade talks. US Treasury yields recovered, although the yield on the benchmark 10-year note settled at 1.68%, recovering from an intraday low of 1.62%.

Earlier in the day,  Japan released the Domestic Corporate Goods Price Index, which remained flat monthly basis in July, and declined by 0.6% when compared to a year earlier, missing the market’s expectations. The Tertiary Industry Index fell in June by 0.1% as expected. Early Wednesday, the country will release Machinery Orders for June.

The USD/JPY pair has stabilized at around 106.60 during US trading hours, its highest settlement in a week. The 4 hours chart shows that it broke above its 20 SMA, now directionless around 105.70, still below bearish 100 and 200 SMA. Technical indicators have pared their advances near overbought levels, anyway leaving doors open for additional gains in the short-term. In the longer run, the advance is a mere corrective, as the bullish case would be more sustainable on a recovery beyond the 109.40 price zone.

WTI struggles to keep $42.00 amid risk-off in Asia

WTI extends the previous day’s losses from $42.79, recently bounces off the intraday low. US-China and Washington-Ottawa tussles join dimming hopes of US stimulus to weigh on the risk-tone.