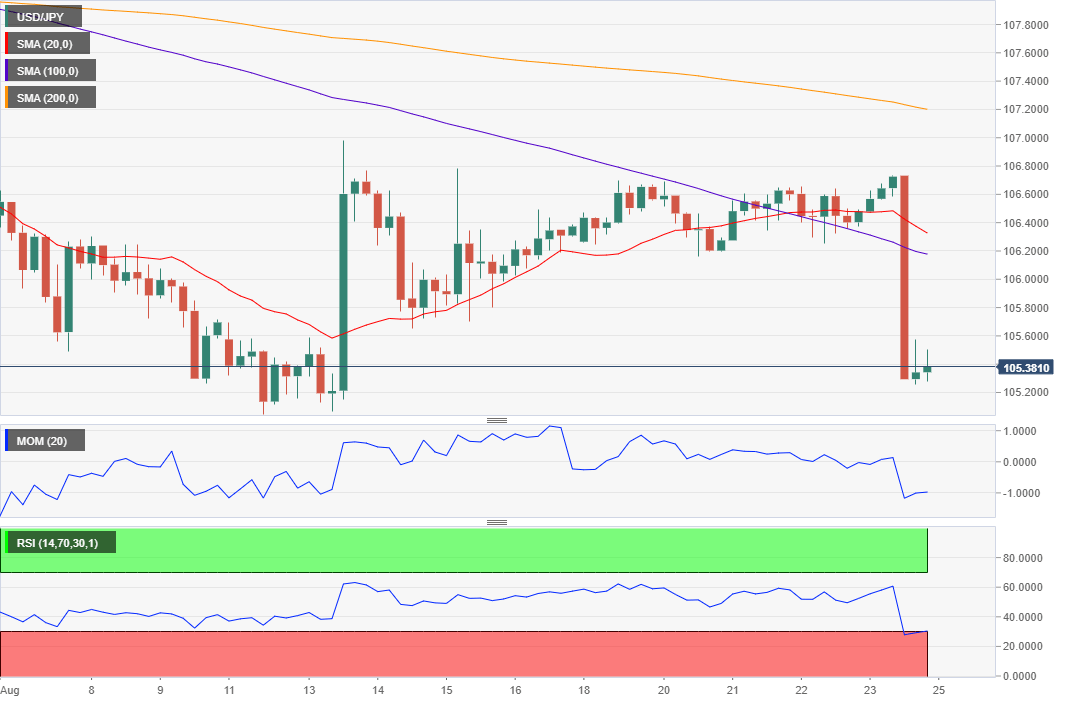 The USD/JPY pair sunk Friday, following US President Trump’s fury with China and Fed’s head Powell, as the market rushed into safety. The pair fell to 105.24 to settle around 105.40, as US President Trump’s decision to escalate the trade war threats a steeper global economic downturn and lifts the odds for a US recession. Wall Street collapsed, and the US yield curve inverted once again. The benchmark yield for the 10-year Treasury note, finished the week at 1.53%, where it also settled that of the 2-year note. On Friday, Japan released National July inflation, which came in as expected at 0.5% YoY. The core CPI, ex-fresh-food, also matched the market’s forecast with 0.6%. The country will release the July Corporate Service Price index at the beginning of the week, and June Leading Economic Index and Coincident Index.

The USD/JPY pair resumed its decline and is posed to extend it, as, after failing multiple times to recover beyond the 38.2% retracement of its latest daily decline, it fell toward the bottom of the range. In the daily chart, the 20 DMA offers a sharp downward slope, converging with the mentioned Fibonacci resistance at around 106.65, and accelerating its slide below also bearish 100 and 200 DMA. Technical indicators faltered around their midlines and head south, with the RSI currently at 38. Shorter term, and according to the 4 hours chart, the pair is oversold, but gives no sign of downward exhaustion, as it fell sharply below its 20 and 100 SMA, both converging in the 106.30 area with downward slopes, and as technical indicators hold consolidate at weekly lows.