Last month, on the 19th March, the Indian rupee hit a major resistance area against the US dollar, prompting us to write an aptly-titled article: “USD/INR: Indian Rupee hits major hurdle, could reignite EM currency concerns.”

As it turned out, that happened to be the rupee’s high of the year so far.

As the rupee weakened, The USD/INR has pushed higher over the past few weeks and is now threatening to break its corrective bearish trend line, potentially resuming its long-term rally.

Today, the Indian Rupee has weakened below the Rs70 per dollar mark, hit in part by the rallying crude prices, with the nation being a large oil importer.

Both major oil contracts have hit new highs on the year this week, with Brent touching $75.50 a barrel today for the first time since 31st October. It comes after the US decided to end sanction waivers for countries that import Iranian oil, which includes India - a nation that is heavily dependent on imports of the black stuff.

Also hurting the Indian Rupee is the fact that the nation’s central bank has adopted a dovish monetary policy stance, cutting interest rates twice this year.

Externally, additional pressure is being exerted on the rupee by a rallying US dollar, with the DXY breaking out of its prior range this week.

Other emerging market currencies (EM FX) are also coming under pressure, with the likes of the Turkish lira, Polish zloty and Argentina peso looking particularly vulnerable.

If the EM FX continues to weaken, then this could have ramifications for the wider markets, which could halt the Wall Street rally after some of the major US indices broke to fresh highs this week. 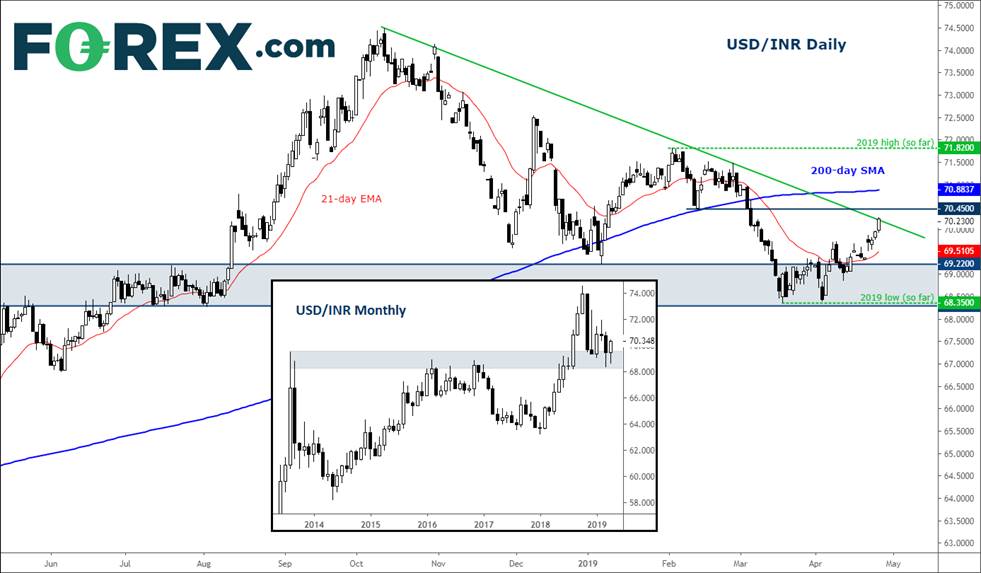