The US dollar resumes its rally even as the mood in equity markets initally improved. USD and GBP are the top performers while the gold, silver and the Kiwi were the weakest. EURUSD hit its final target of 1.17 for 260 pips.

USDX broke above that key neckline resistance of the inverted H&S formation, coinciding with the 55-DMA.  The big question facing the FX market remains whether this is a dollar dead-cat bounce or the start of a longer retracement cycle. The price action on Tuesday highlighted the scope for further gains as it broke some technical levels and neared others. The bid in the dollar was strong and steady even as the news and market sentiment varied.

Below, is Ashraf's chart & trade idea on the DOW30 before the close of Tuesday's cash session, highlighting the 27500 neckline support turned resistance. 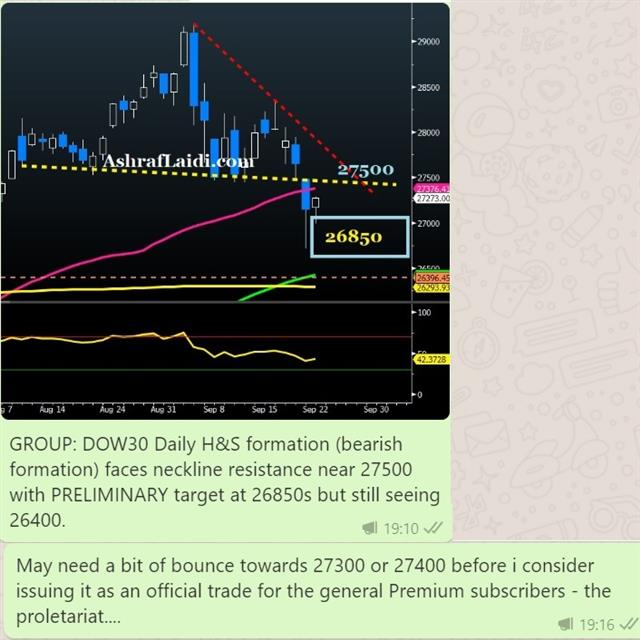 The steady bid in USD/JPY is certainly a curious element of the playing field as it climbs from levels that are undoubtedly a headache for Japanese officials. That extra bid could be providing some of the marginal strength in the dollar.

Another part of the equation is undoubtedly the resurgence of the virus in Europe. The UK placed a new curfew on bars and encouraged companies to allow work from home. Eurozone consumer confidence was better than anticipated on Tuesday but cases throughout the continent are moving in the wrong direction just as cold-and-flu season begins.

In the battle of easy money vs uncertainty the certain of low rates appears to be priced in while the uncertainty around the virus and US election is encouraging some deleveraging. That shift to the sidelines is helping to unwind crowded positions like long stocks and short USD.