The first Federal Reserve Open Markets Committee (FOMC) meeting of the year will try to reconcile the precarious US present with a future freed from the pandemic's straitjacket and reassure markets that the Fed has every intention of continuing its extraordinary economic support.

No changes are expected in the bank's interest rate or bond purchase program. Market attention will center on the FOMC statement and Chairman Jerome Powell's prepared comments and news conference.

Chairman Powell has repeatedly said that the bank will not withdraw its interest rate support until the economy is fully recovered. But with Treasury rates increasing modestly in January and inflation rising rather than falling he will again seek to reassure markets that the Fed is not considering a reduction in the $120 billion a month in bond purchases.

Part of the market concern is the logical supposition that the next move in interest rates, whenever it occurs, will be higher. The 10-year Treasury yield rose above 1% in January for the first time since March and there are price pressures building in parts of the economy.

Equities are at record highs. Commodities have recovered all of their pandemic losses and the Case-Shiller Home Home Price Index jumped 9.5% in November, the largest increase in five-and-a-half years. Copper, a standard measure of industrial demand, is up more than 32% on the year and almost 3% in January.

With over $3 trillion in stimulus cash already sloshing through the economy, and the Biden administration aiming to add another $1.9 trillion, markets are uneasy about what all that liquidity will mean when the US economy and consumer demand start to revive in earnest.

American labor market gains of the spring and summer have vanished with payrolls shedding jobs in December for the first time since April and unemployment filings at their highest in nearly four months.

The lockdowns that have ravaged some state economies particularly California, the nation' largest, are slowly ending. Governor Gavin Newsom has announced the end of the Golden State's strict closure, even though the current caseload is higher than when this version was imposed in December.

Consumers have absorbed the bad news, confidence is stagnant far below February levels, and have pulled back on spending with Retail Sales negative in November and December. The almost year-long decline in retail traffic, topped by the dismal holiday season, may spell doom for many thousands of small businesses who depend on live customers and not the web for receipts, heralding perhaps another wave of unemployment.

The first stimulus program, March's CARES Act was successful in stemming the collapse in employment and in distributing sufficient income to keep consumption stable through the end of the summer.

Congress' refusal to pass a second package, despite the obvious need and pleading from Fed Chairman Jerome Powell and others in the run-up to the election, may have contributed to the sharp decline in hiring and consumer spending in the fall. This was partially relieved by the $900 billion package signed by President Trump before leaving office which included direct payments, supplemental unemployment benefits and a second round of the Paycheck Protection Program (PPP) loans to businesses.

The $1.9 trillion relief bill proposed by the Biden administration may take weeks or even months to reach distribution.

A full economic recovery beginning in the first or second quarter is expected by all markets, but with marginal improvement in the pandemic and none in the economy, that confidence is largely a matter of central bank support.

The Fed's early March intervention, cutting the fed funds rate to 0.25% and restarting the quantitative easing program that has kept Treasury rates at historic lows for the past eleven months, defined the governors approach to the economic fallout of the pandemic.

They succeeded in securing the domestic and global financial system and flooded the economy with liquidity. The business loan program proved far less successful, but as Mr. Powell noted many times, providing grants to individuals is not within the central banks mandate.

Federal Reserve economic projections have illustrated the bankers' case for recovery, most recently in December.

The accuracy and optimism Fed's economic forecasts for 2020 have improved steadily as the distance from the March-April collapse has widened.

The first set had been due at the superseded March FOMC meeting. Given the market and economic turmoil in the spring they were postponed then canceled. 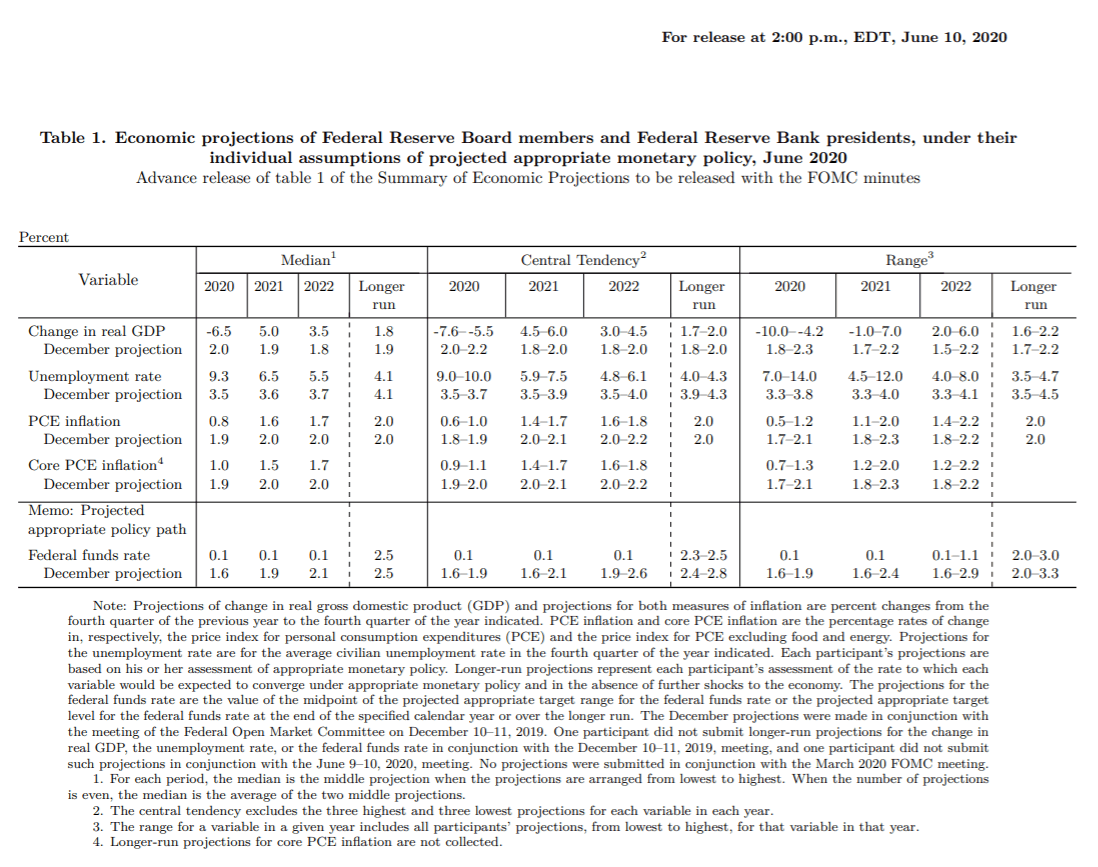 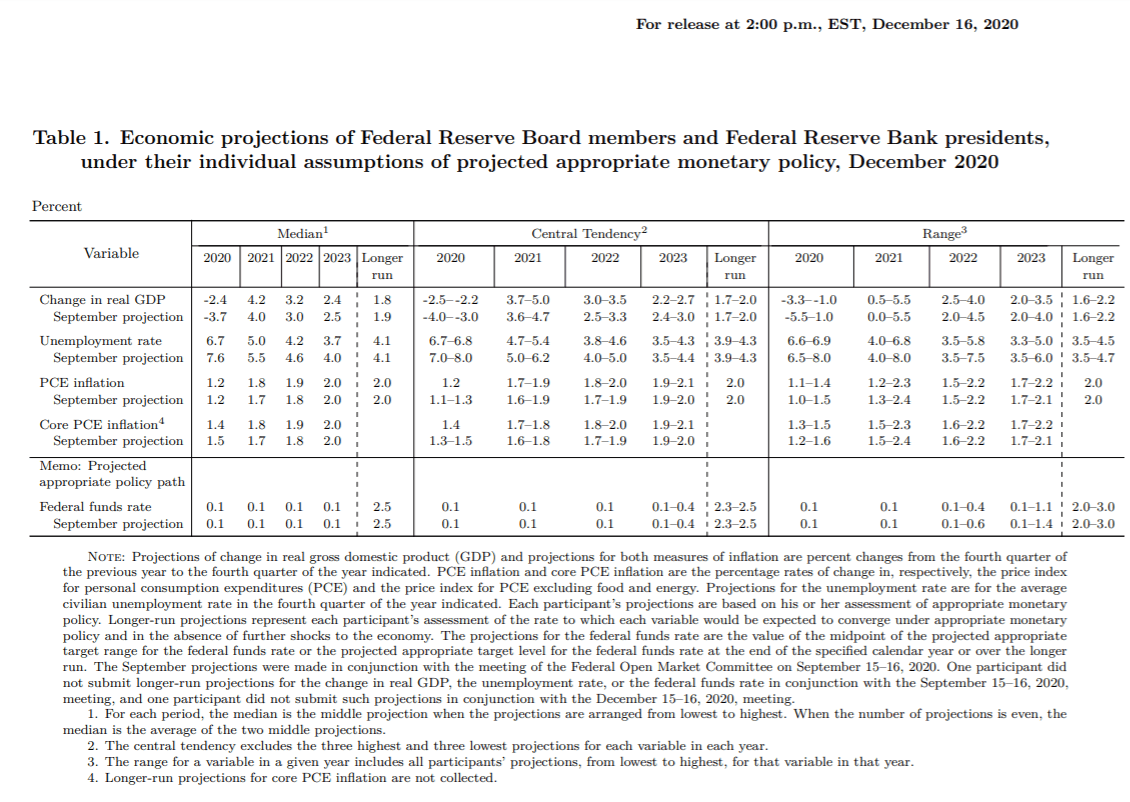 Fourth quarter advanced GDP figures are due on Thursday. The current consensus estimate of analysts as polled by Reuters is 3.9%. The Atlanta Fed GDPNow forecast is 7.5% .

The final GDP figure for 2020 from the Bureau of Economic Analysis is not just the average of the four quarterly numbers, it is a different calculation. Though it will differ from the average it is unlikely to be as distant as the Fed's -2.7% guess.

The Fed's Core PCE inflation projections for 2020 have meshed with the real figures. They started at 1% in June when the extent of the economic impact was unknown, and finished at 1.4% in December which agrees with the actual average through November. Core PCE  forecast to be 1.3% in December.

A similar confluence of reality and estimates is true of the unemployment rate. Listed in June for 9.3% at the end of 2020, 7.6% in September and 6.7% in the December projections, matching the actual rate.

Markets are convinced that the economic recovery, for which there are few actual signs, is waiting around the first quarter corner.

Credit markets and the dollar are waiting for that first unmistakable blush of Fed optimism.

However, current reality is quite different. Negative retail sales in November and December, initial jobless claims at their highest level in five months, payroll losses in December and an unsubdued COVID-19 infection rate .

It does seem that the pandemic will relent under vaccine distribution and that economic growth and the vibrant recovery will become reality.

Still these are nervous times and Federal Reserve Chairman Jerome Powell is not about to abandon the Fed's role as the chief market booster. But overt optimism will not work either, lest the credit markets begin to anticipate a swift return to normal rates and undermine the Fed's work.

Perhaps the famous words of Former Fed Chairman Alan Greenspan are the appropriate motto "If I seem unduly clear to you, you must have misunderstood what I said."

EUR/USD has managed to erase its daily losses and turned flat on the day slightly below 0.9700 in the European morning. As investors await IFO surveys from Germany and mid-tier data releases from the US, the cautious market mood limit's the pair's upside.

GBP/USD has recovered above 1.0700 from the all-time low it touched below 1.0400 earlier in the day. GBP bears move to sidelines amid market speculations that the Bank of England could consider an emergency rate hike to stop the currency's depreciation.