The myriad of risks surrounding the UK economic recovery means that government borrowing is set to remain high both this year and next. But while the Bank of England has slowed the pace of its QE purchases, we don't think it's time to expect the UK rates curve to steepen.

Government borrowing only set to go up

UK prime minister Boris Johnson’s post-Covid economic speech, and the forthcoming summer statement from Chancellor Rishi Sunak, come just days after the Bank of England opted to reduce the pace of its asset purchases. That begs the question, how will those competing forces play out in the UK gilt market?

Well, there’s little doubt that government borrowing is going to stay elevated for some time.

Admittedly, there wasn’t much for markets to get excited about in Johnson’s latest speech. Tuesday's £5bn pledge makes up only a small portion of the planned increase in annual public net investment from 2% to 3% of GDP outlined in the March budget. And as always with such infrastructure-related pledges, the challenge will be to identify projects that are not only ’shovel-ready’, but that are productivity-enhancing too.

But the prime minister’s recent comments signal that his government is unlikely to return to austerity, and we, therefore, suspect the borrowing requirements for the next fiscal year (2021) will still be fairly sizeable - and probably much more than the Office for Budget Responsibility initially estimated back in April.

Those projections, which admittedly were based on the now-unlikely assumption that things return to normal very rapidly, pencilled in a deficit of around £80bn next year, from roughly £300bn estimated for this fiscal year.

The Chancellor is poised to unveil fresh fiscal measures next week, potentially including a cut to VAT. Typical estimates put the possible cost in the region of £20-30bn depending on the change, although the jury is still out on whether such demand-stimulating measures would be that effective in the current environment, where consumers remain wary about the health risks of going out and spending.

Equally, there is conceivable uncertainty about where unemployment is headed - and that’s perhaps the largest reason to expect a higher deficit. Firms will increasingly have to confront the tough decisions presented by the prospect of ongoing social distancing requirements. With the job retention scheme set to be made a little less generous over the summer, there are fears that we could see more redundancies. 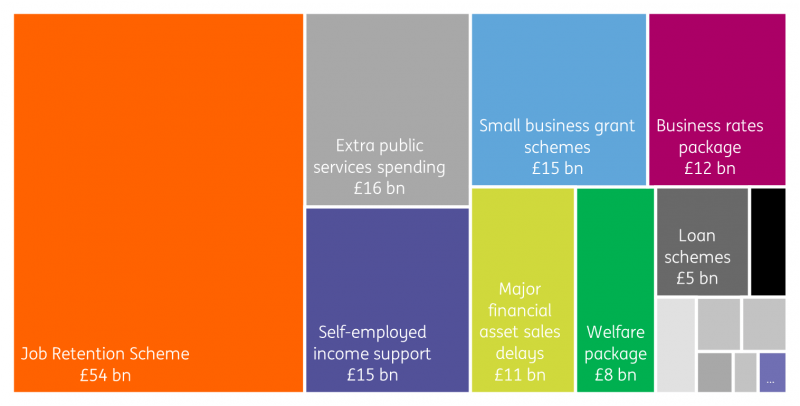 There’s also still plenty of uncertainty around how future outbreaks will be contained. There’s little doubt the virus will return, but the question is whether the government’s new contact tracing and testing programmes are enough to prevent further widespread lockdowns, beyond the localised containment already being implemented in Leicester.

We think the borrowing requirement for the 2021/22 fiscal year could easily tot up in the region of £150bn.

The Chancellor will be under pressure to add further business/income support to specific regions as outbreaks emerge. Inevitably, the furlough scheme may need to adapt to assist businesses affected by localised lockdowns, even after the current national scheme is scheduled to end in October.

Finally, there's Brexit. The UK has opted against extending the transition period, which means UK-EU trade terms will change significantly next year regardless of whether a free-trade agreement is struck. That will require government investment in new processes and a wealth of new customs points/staffing. But also raises the prospects of businesses, particularly SMEs, requiring some additional support as they adjust to the new costs of doing business with Europe. Importantly, the sectors likely to be affected - the likes of wholesale trade and manufacturing for instance - are not necessarily the same as those most hit by Covid-19 (e.g. recreation/hospitality).

Wrapping that all together, we think the borrowing requirement for the 2021/22 fiscal year could easily tot up in the region of £150bn.

Gilt supply heading for record year
All of that will keep supply fairly elevated. We know that for the current fiscal year, the UK’s Debt Management Office (DMO) expects gross supply of £275bn between April and August, according to their updated remit.

That compares with its previous target of £225bn for April to July and implies a slightly slower pace of debt sales in August (£50bn) than in the first four months of the year (£56bn). Progress against this remit last stood at £181bn.

Despite this year shaping up to be a record for debt issuance, borrowing forecast for the UK and elsewhere remain subject to upward revisions, not least from the plan to cut VAT.

That no target has been given for the rest of the year shows the exceptional amount of uncertainty there still is about public finances. The Office for Budget Responsibility (OBR) is publishing a useful tracker of the impact of measures taken to support the economy on public finances. Based on its analysis, we estimate total debt sales this fiscal year will reach £427bn, which equates to £329bn when redemptions are deduced. This is a significant step up from the previous record set in 2010-11 when the DMO sold £227bn and £210bn before and after redemptions respectively.

Despite this year shaping up to be a record for debt issuance, borrowing forecast for the UK and elsewhere remain subject to upward revisions, not least from the plan to cut VAT mentioned above. The risk of a second-wave in Covid-19 is particularly prevalent and additional measures to soften the economic blow would in all likelihood require extra financing. 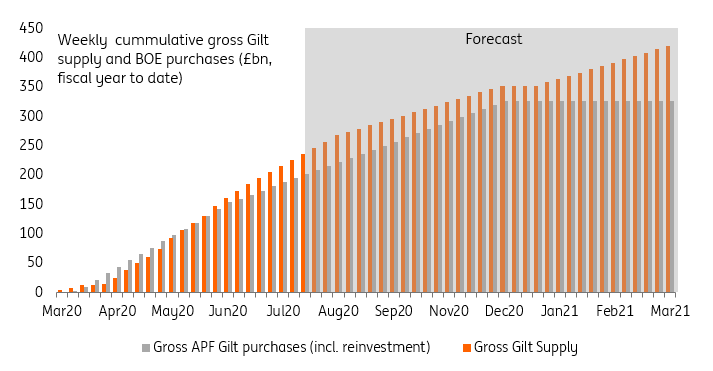 The Bank of England's forceful action so far have shielded the rates market from a spike in interest rates via two levers.

Firstly, lowering the Bank rate to a new record low of 0.1% ensures, for now, that government borrowing costs do not spiral up and add to the already record deficit. More importantly, the purchase of Gilts via the Asset Purchase Facility (APF) has all but hoovered up the extra Gilt issuance carried out this year.

The £100bn addition to the APF target, together with the new timeframe to carry out the purchases, imply a slower weekly pace than in the initial phase of the program. In gross terms, we estimate Bank of England intervention will absorb £327bn of Gilts this year. This compares with our estimated sales of £427bn in fiscal 2020-21. So far both have been roughly matched but they will diverge more noticeably into year-end as purchases slow.

Even if their importance should be roughly equivalent, GBP rates react more strongly to central bank purchases than to DMO Gilt sales. One potential explanation is that the central bank balance sheet expansion happens in times of market stress when demand for safe assets such as Gilts is the strongest. This compounds the market impact of QE purchases and dulls that of increased issuance. This also explains why we are not forecasting a quick rise in Gilt yields as the stock of debt outstanding continues to rise: the constant stock of BOE holdings argues for a fairly benign rise in 10-year yields to 0.4% by end-2020 and to 0.8% one year later.

The BoE's strategy: Too early to talk about steepening

It seems surreal to already discuss balance sheet reduction but Bank of England Governor Andrew Bailey’s hints that the Bank might look to unwind QE before it raises the Bank Rate brings the risk of an adjustment higher in Gilt yields. In isolation, quantitative tightening - the opposite of quantitative easing should indeed bring about a rise in Gilt yields and swap rates across maturities. The main difference with raising rates will be the impact on the slope. Hikes in the Bank Rate are more likely to push up yields and to increase term premium at the front-end of the curve.

"We think it is too early to position for a steeper GBP curve."

This result is empirically confirmed by comparing the sensitivity of short and long interest rates to the Bank Rate and to QE. Unsurprisingly, very long-end interest rates are impacted more by variations in the size of the central bank's balance sheet. This is also consistent with the fact that the average maturity of Gilts purchased since March is 14 years, in line with previous iterations of the program.

However, we think it is too early to position for a steeper GBP curve. Even if the Bank would prefer unwinding its balance sheet before raising rates, it is not yet certain that it would prefer implementing negative rates rather than increase QE if the outlook deteriorates. More importantly, we regard the demand for the duration as a global phenomenon.

In an environment where other major central banks still rely heavily on QE to ease, a re-steepening of the curve is likely to be limited by development on foreign yield curves.

Read the original analysis: UK public finances: Not (yet) breaking the bank