Today we get April durables goods (expected to dip 2% m/m) and the Baker-Hughes rig count. We also get a new GDP forecast from the Atlanta Fed. The last one (May 16) called for Q2 growth at a piddly 1.2% rate.

It seems that an offhand remark from Trump (that the Huawei ban may be modified as part of a wider trade deal) should not be the trigger for renewed hope for the trade deal. China is talking about being willing to suffer terrible hardships in the trade war, going so far as to liken it to the Long March.

Did Trump blink? Is it a white flag? You can't trust Trump because he is inconsistent and erratic, but logic says he needs the China deal to show off to his base that he is a winner and a great negotiator. He can't appear to be a loser who let a China trade deal slip his grasp. The Chinese have the upper hand now and almost certainly know it. We expect conciliatory remarks in Japan and new US initiatives to get the ball rolling again. These will probably take the form of loosening the Huawei ban and also letting China buy tech stuff from US companies. It doesn't seem possible to cut the tech stuff out to be treated separately. Bottom line—a deal, assuming we get one, will leave China able to continue to steal US technology. It's fate. A second bottom line—a trade deal takes the heat off commodities and the emerging markets that produce them, including our darling Australia. And oil normalizes.

Bloomberg's Authers found a dandy chart from a London company named Absolute Strategy Research that shows "the equity market moves tend to move ahead of changes in trade flows, with a six-month lag.

The issue here is that the rebound in world equities since the Christmas Eve selloff suggests that traders are pricing in a trade recovery. This would imply that they are due quite a correction. Further, trade volumes appear to be enduring the most significant interruption yet to their steady improvement since the aftermath of Lehman's bankruptcy." 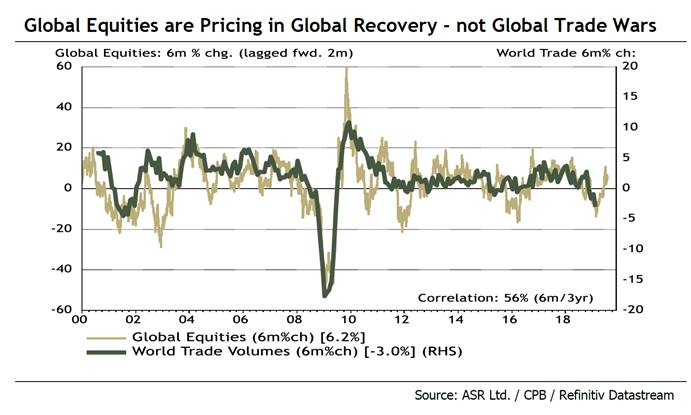 Recovery is not out of the question. The crashy, panicky move yesterday was an overreaction. The recovery so far today is not really justified, either, but the markets have an abiding faith in the stability of institutions and norms. Maybe they shouldn't because Trump is a real risk, but all is not lost.

As for the Fed, its stance of patience and wait-and-see is not shared by some market measures. The latest probability of a rate cut from the CME Fed-watch page shows that by the December FOMC, the likelihood of rates remaining the same is a mere 22.9% and the probability of a cut (or more than one) is 70.10%. We came up with that 70% number by adding up all the probabilities that are not today's rate. See the table. 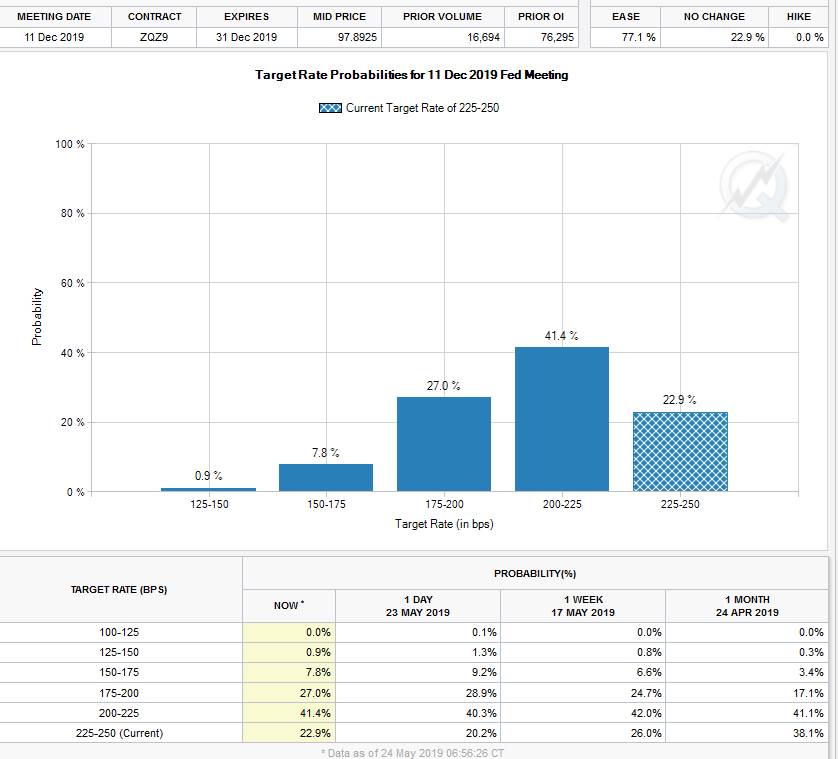 By next Monday we expect a general settling down and bottom-fishers out in force, unless the European elections somehow scare the horses again.

Note to Readers: Monday, May 27th, is a national holiday in the US (Memorial Day to honor the war dead). Markets are closed. The bond market closes early today. We will not publish a Morning Briefing on Monday but will update the Traders' Advisories.