The pair is down by around 3% in a month and recently broke below 1.05, a level last seen in August. We think that divergence in monetary policy, the commodity outlook and speculative positioning justifies a downside risk outlook.

While trade tensions have been driving most movements in AUD/USD and NZD/USD, AUD/NZD is more reliant on the two countries’ local stories. After inching above 1.08 in early November, AUD/NZD has drifted lower and is now advancing well below the 1.05 level. We see three reasons why such a bear trend may continue.

Both the RBA and the RBNZ have moved in similar directions this year as they both provided monetary stimulus to revive inflation. In the past few weeks, however, market rate expectations for the two central banks have diverged significantly, as you can see below.

Rate expectations in AU and NZ have taken diverging paths 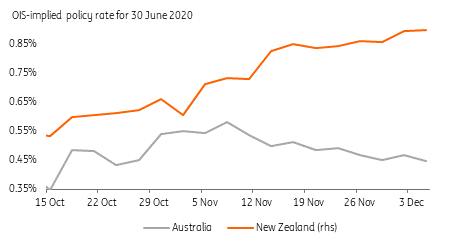 Despite keeping rates on hold and striking a fairly constructive tone in this week’s policy meeting, the Reserve Bank of Australia is still facing speculation that a cut will come early next year. GDP data for Q3, released after the RBA meeting, disappointed market expectations and pushed investors to price in more easing. Weak retail sales this morning also triggered a similar move. Inflation (now at 1.7%) is below the RBA target of 2-3% and unemployment (at 5.3%) is far from the 4.5% goal seen by the Bank as a supportive level for price growth.

Sluggish wage growth is also offering little support. All this is inevitably convincing markets that the RBA will lower the Cash Rate again soon, especially when considering that Governor’s Lowe call for fiscal stimulus has remained unanswered, with the government still aiming to erase the budget deficit. We are still not entirely convinced that a cut will eventually be delivered as we expect inflation to start picking up in 2020. Still, we we acknowledge this is now increasingly likely and we don’t exclude speculation about a possible RBA QE to build again in the next few months.

The complete opposite seems to be true for the Reserve Bank of New Zealand. The Bank delivered a big hawkish surprise in its 13 November meeting as it kept rates on hold despite markets almost fully pricing in a cut. Since then, the rhetoric has been clearly indicating that there is no plan to lower rates in the near future. In a very recent comment, RBNZ Governor, Adrian Orr, referred to monetary policy as in a “hold phase”. It must be noted that the RBNZ has a less ambitious inflation target (2%), which we expect to be reached early next year. The announced plan by the NZ government to deliver a package of infrastructure spending in 2020 is also easing pressure from the Bank to provide more stimulus.

Looking ahead, we see a cut by the RBNZ in 2020 quite unlikely while more easing by the RBA increasingly possible. We suspect that the recent dynamics will continue to push markets to price in policy divergence between the two banks which should continue to depress the AUD-NZD rate differential.

Both countries rely heavily on commodities (albeit different ones), and the price swings have significant impact on both economies. Looking at the prospects for the commodity prices next year, we can note some divergences.

Our commodities team expect the price of Australia's main export, iron ore (20% of total export), to come under pressure as production in Brazil is gradually restored. The second biggest export, coal, also presents an uninspiring prospect as the switch from coal to gas and LNG in many developing countries remains a dragging factor. On the flip-side, the booming natural gas industry (Australia is the world’s biggest producer of LNG) and our expectations for a fairly supported gold price (its third-largest export) should partly offset the negatives. However, the balance of risks on the commodity outlook seems slightly tilted to the downside.

Conversely, New Zealand’s exports are heavily centred on dairy. The average auction price of milk and milk-related products (which make up around a quarter of NZ's total exports) has been on the rise in 2H19. Fonterra, NZ's main dairy cooperative, recently announced an upward review of its farmgate milk price forecast for the 2019/20 season. The forestry industry (9% of total export) should also find a more supportive price environment, as prices have stabilised after dropping during the summer. The weather factor remains a constant downside risk for NZ exports, but barring extreme conditions, the commodity outlook for 2020 appears more constructive than in Australia.

Latest CFTC data (read our FX positioning note here) confirms a recent trend in net speculative positions: the NZD remains the biggest G10 short, despite the improved risk and rate environment. As of 26 November (see the chart below), net speculative shorts on NZD piled up to 51% of open interest, close to the bottom of the 5-year range.

Net positions in the Australian dollar are also in short territory (-25% of open interest), but make up only half of the NZD short positioning. Also, the AUD positioning falls inside the +/- 1 SD band from its 5-year average, which tends to suggest more limited room for a fierce adjustment.

Similar to the action we saw in GBP over the past few months, we expect the extensive short positioning on NZD to exacerbate the bullish moves as momentum around the currency keeps building. With a smaller positioning advantage of AUD in place, this may translate into further downside potential for AUD/NZD.

In conclusion, we believe that the fall in AUD/NZD is not overdone and we continue to see the balance of risk for the pair tilted to the downside. Regardless of the direction of trade-related risk sentiment, the less and less dovish stance of the RBNZ keeps denting the AUD-NZD rate differential, and the commodity outlook appears more positive for New Zealand than Australia. When adding NZD extreme short positioning compared to AUD, we think AUD/NZD can break below the 1.04 level in the near future and soon approach the 1.0350 August lows.