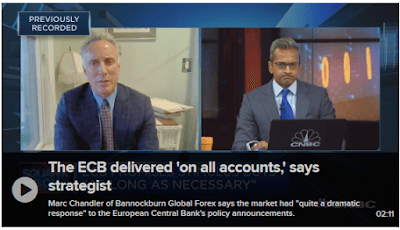 A few hours after the ECB announced a new package of monetary accommodation, I joined a discussion on CNBC Asia with Nancy Hungerford and Sir Jegarajah.

I make two points.  The first is about the euro's price action.  What impressed me about it was that the euro posted an outside up day, trading on both sides of the previous day's range and closing above its high.  When Sri and I were talking early in the Asian morning, there still had not been the follow-through that later saw the euro move above $1.11 for the first time in a month.

The second point is about the substance of what ECB's action. I suggest that the open-ended nature of the asset purchases and forward guidance and Draghi's emphasis that it is fiscal policy, not monetary policy that is letting people down.   Although Draghi refused to name the people or countries that opposed the resumption of asset purchases, someone appears to have revealed this confidential information to reporters.  On such leaks, we assume that it was those that lost the decision that take their case to the media, not the winners.

The countries that reportedly objected to QE were, for the most part, the same ones that opposed it in 2015 when it was first launched: Germany, Netherlands, Austria, and Estonia. This time the French also reportedly objected, but it seemed to be on procedural grounds, in the sense that maybe it would be a more useful tool to deploy if Brexit proved disruptive.  What struck me was that the naysayers also have the space to provide fiscal stimulus but have been resisting meaningful and timely action.

Gold's recent rally has bolstered bullish expectations and revived demand for call options, which gives the holder a right but not the obligation to buy the yellow metal at an agreed price on or before a particular date.