Outlook: We get the usual jobless claims today. The WSJ writes that claims “have trended downward in recent weeks to around 550,000. Economists polled by The Wall Street Journal forecast 528,000 claims were filed last week. Those levels are well below the millions of claims filed weekly a year ago, but still, more than double the roughly 200,000 weekly applications submitted in the months before the pandemic began.”

We also get the initial GDP for Q1, likely near the 8% that Goldman Sachs forecast in Feb. The WSJ has 6.5% and Bloomberg gets 6.6%. The Atlanta Fed GDPNow model gets 7.9%, down from 8.2% only two days before, on the export drag that reduced the GDP by 1.42% and a slowdown in the contribution from real gross private domestic investment (1.6% from 2.2%). 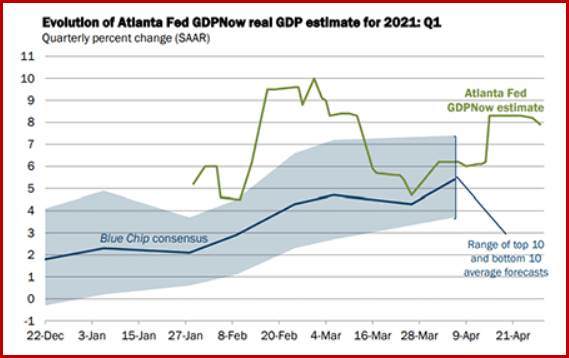 Not to sing the same song too often, but a GDP number over 6.5% means a drop in risk-off and a weaker dollar. If it’s more than 8%, we could get some serious reversals.

The verdict on the Fed is almost fully digested. It remains dovish and not even thinking about changing its mind. Hence the short-lived bump in yields. The Fed is adamant about its outlook and while not everyone thinks it is right, consistency speaks of stability and stability nourishes risk appetite. Fed chief Powell says the Fed is a “long way” from changing its dovish stance.

Some analysts see the Fed beginning to think about thinking about a taper, with a whisper of such a thing at the July 27-28 meeting when we will have gotten three more payroll reports and possibly inflation well over 2%. Then the advance notice of a tapering announcement could come as early as the Dec meeting.

Does this mean tapering for all of 2022? For its part, the WSJ says “Yields on U.S. government bonds and certain derivatives suggest investors believe the Fed will be able to start raising rates by 2023, sooner than most central-bank officials have indicated.” Remember the Fed has said it doesn’t see an outright hike until 2024. The FT chimes in that “Eurodollar futures, a measure of interest rate expectations, now indicate the Fed will raise rates by early 2023. almost a year earlier than suggested by the central bank’s latest forecasts, published in March.”

For what it’s worth, the CME FedWatch tool shows that for the Dec 15 meeting, 90% see no change in rates and only 9.8% see rates at 0.25-50%, with 0.2% seeing 0.50-0.75%. Also, take with a grain of salt that the Fed has never gone as long as 4 years without a rate change. Meanwhile, the WSJ reports investors are hedging their bets and buying into TIPS-based ETFs. See the chart. It doesn’t look like panic, though. 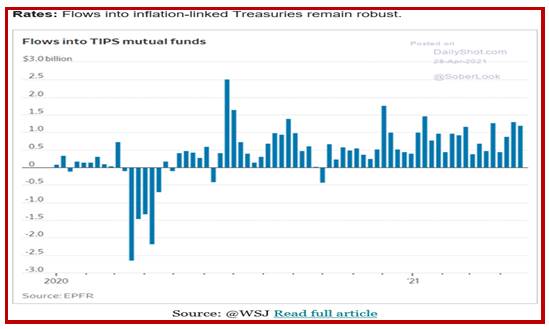 The bond market, apparently, has yet to see actual hard data on inflation before it makes up its mind about the Fed relenting at an earlier date. Nobody knows how high the inflation rate would have to go to change minds at the Fed—is it 3.5%? For how many months? The other issue mostly neglected by pundits is that the US has to create 8.4 million jobs to get back to pre-pandemic levels, the Fed target. Come to the December meeting, the Fed will have 7 fresh jobs reports. March delivered 916,000 new jobs, so if the economy continues at that torrid pace and we multiply by 7, that 8.39 million jobs.

Golly, maybe advance warning of tapering this summer and the actual announcement at the Dec meeting is not pie-in-the-sky, after all. Well, no. According to the WSJ, The 916,000 was an aberration. The economists in its survey project robust hiring—better than 500,000 a month—that will continue for the next year. “While that pace of hiring is more than double the rate in 2019, it would still leave the economy short of replacing all of the jobs lost during the pandemic in the next 12 months.”

Okay, let’s multiply again. Say the number is 500,000 per month. That takes 16.8 months to reach 8.4 million Which takes us to July/August 2022. If we still expect advance notice of tapering well before the actual deed, we could conceivably get it in December this year.

Bottom line: even ahead of jobless claims and the GDP estimate, the stage is set for good or maybe superb data, cutting down on whatever anxiety is out there, including a premature taper tantrum. The market is free to sell dollars to its heart’s content. No need for a safe haven, especially not a safe haven from the US president.

Tidbit: Something named the European Systemic Risk Board (chaired by ECB chief Lagarde) warns of a tsunami of corporate insolvencies once the €1.5 trillion of public support is withdrawn. “Mitigation” plans are called for. It’s not clear how to compare European insolvency with American bankruptcies, also way down and putting paid to forecasts, including our own, of a flood of them. After the first bunch (Hertz, Brooks Brothers), it quieted right down. Should we expect a reprise, like Europe? One of the great joys of newspapers is letters to the editor. We like this one (from someone styling himself as “Doc Martin,” no less): The job of the central bankster is to ensure bad lending and risk decisions are never paid for.”

Tidbit: Pres Biden’s speech to Congress got some heavy competition from the news that the Justice Dept got a subpoena from a federal judge for a search warrant and sent the FBI to grab a bunch of stuff (papers and communication devices) from the homes and offices of Trump lawyer Giuliani and Trump associate Victoria Koenig. They are famous for spewing lies and misinformation on tv and in the press that may have come from Russia, but the purpose of the search is to find evidence that the pair were a conduit for actual campaign money from Russia to the 2016 Trump campaign. Remember that the Mueller investigation found “collusion.” Rudy says the charge is only failing to register as a foreign agent. Note that judges do not issue warrants without probable cause that specific evidence will be found and is not “stale.”

At some point, a decision has to be made whether to rope in former Attorney General Barr, who impeded the Giuliani warrant and had interfered with the convictions of Trump cronies Manafort, Flynn, and Stone, putting political interests above the law, aka corruption. The next logical step is asking what Trump knew and when did he know it. One of the flipped Russians in the money chain (Lev, not Igor) claimed Trump always knew everything.

This is juicy stuff. Unfortunately, because the subjects are lawyers, it’s going to take months and months to winnow out client-privileged material, a job that is done by a separate filter team at the FBI. We may not get the next chapter—charges of a crime—until late in the year. Pray for leaks.

EUR/USD stays under pressure below 1.0500

EUR/USD is having a difficult time staging a rebound after having dropped below 1.0500 earlier in the day. FOMC Chairman Powell's relatively optimistic comments on the economic outlook provided a boost to the dollar in the second half of the day, weighing on the pair.

GBP/USD fell to its lowest level in nearly two weeks near 1.2100 but managed to stage a rebound. With the dollar preserving its strength on the back of FOMC Chairman Powell's hawkish comments, however, the pair stays in negative territory near 1.2150.

Gold is struggling to make a decisive move in either direction and seems to have steadied near $1,820, where it closed on Tuesday. Despite the broad-based dollar strength, XAU/USD holds its ground amid a more-than-2% decline seen in the 10-year US yield.