We are pleased to see that the WSJ has changed its tune about Powell's statement and now can see that he was sending a "subtle message" to Trump—if you don't want a recession, fix the trade war. Powell named "trade" twenty times. But the WSJ stops short of saying a lot of other things, perhaps to avoid alerting the White House to the extent of the Fed's rebellion.

It's not just Powell. We missed it at the time but here is a version of the dot-plot prepared by Gittler at ACLS published yesterday. We hate the dot-plot. It's confusing and hard to read. It doesn't line up with the probabilities issued by the CME, based on futures trading volumes. It's also just a forecast. But as Gittler points out, this time the dot-plot shows something critical—for this year, only 7 want another cut (of 17). For next year, only eight would cut once while seven would hike. 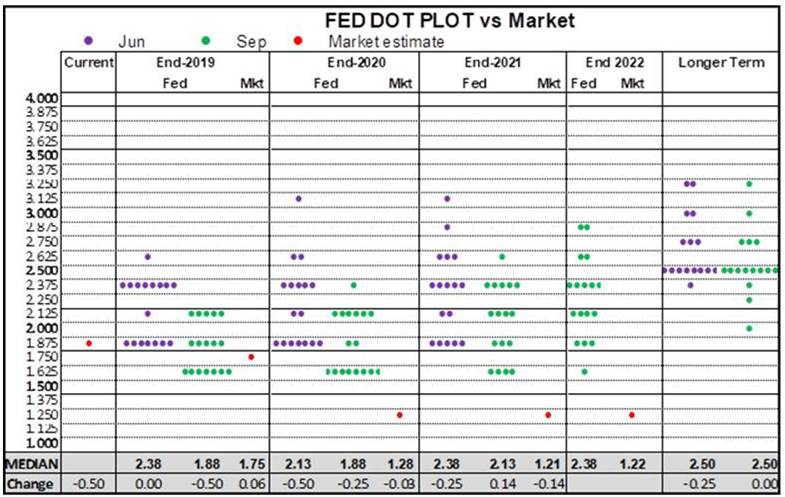 Note that in the longer-term column, almost all the dots are at 2.5% or more. This implies, among other things, the Fed expects rising inflation without recession (stagflation) and/or employment will remain strong and/or the trade war is going away as a genuine economic factor. What does the Fed know about the economy that the rest of us do not? At a guess, it's rising inflation plus the robustness of the economy that can fend off the negative effects of the trade war even if the trade war persists. In fact, these dot-plot forecasts imply the Fed is counting on Trump backing down on the trade war and not taking us to the worst-case scenario.

Now see the red dots, which represent the CME FedWatch table. The market wants seriously lower rates. Well, it always does, and this time it likely reflects a belief in Trump getting his way, too. But the Fed is not impressed by recession talk and not influenced by Trump talk. We are right to call Powell heroic.

We have a hodgepodge of factors but nothing special. You know the market is short on factors when the big news of the day is Canadian retail sales (sorry, Canada). Next week is the opening of the UN and the IMF/World Bank not far behind (Oct 14-20). We have summits on climate change. The US has 23% fewer birds—silent spring. We have yelling about gun control. We have Dems scaring everyone with talk of revolutionary change or going to sleep, take your pick. Unless and until Trump does the next outrageous thing, we are at a loss to evaluate risk-on/risk-off. The China trade talks are not likely to give an outcome today, and Japan still has its fingers crossed that it gets that auto tariff exemption Trump apparently promised. Well, we could use a rest, but don't count on it lasting very long. Trump needs distractions from his crimes and is sure to invent some. We continue to think the dollar will be favored, perhaps with a splash.