The desire for yield seems to have caused an increase in the percentage of loans which are covenant lite. One of the biggest bubbles in this economy is in junk debt as the need for yield and the length of time since the last recession has made junk bonds highly coveted. The chart below shows that for the first time in history, in late January, equities began yielding more than high yield credit. The name high yield no longer applies because of how low the yields have gotten. A better term might be risky credit. Junk bonds have never been riskier relative to equities. This assumes that the concept of a credit cycle hasn’t ended and that default rates will increase when there is another recession. Central banks have declared an all-out war on the credit cycle as they have taken on mission impossible- ending recessions forever. 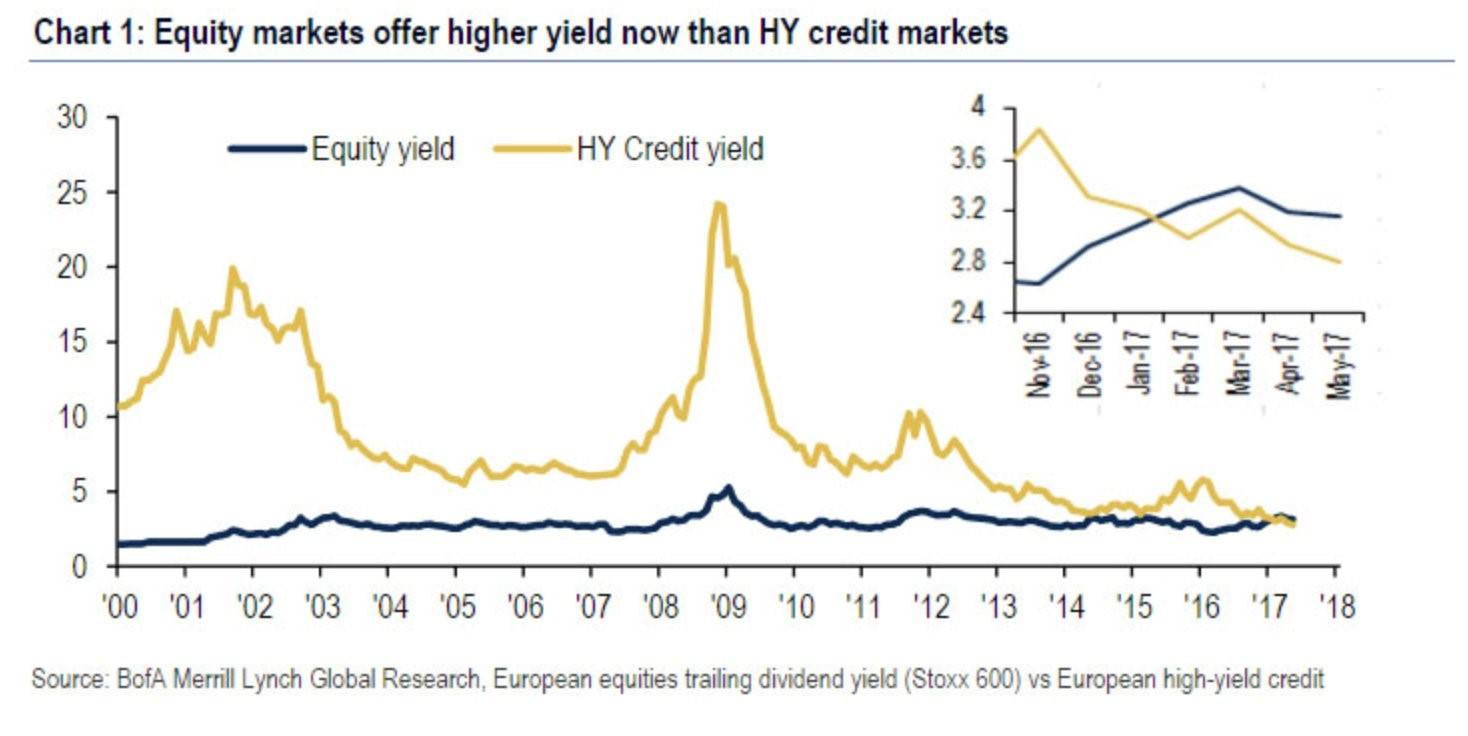 The chart seen above plays into the new trend which is that stocks have become yield investments and bonds have been investments aimed at achieving capital gains. This cannot last because default rates will normalize at some point. The amazing thing is that equity yields aren’t even relatively high as stocks in Europe have rallied recently. The ECB plays a direct role in the decline in corporate bond yields as it’s purchasing these bonds. The ECB’s tapering of its purchases from $80 billion per month to $60 billion per month hasn’t done anything to slow the rally in high yield credit. I suspect if the ECB ends its purchases in December, there will be a selloff at some point in 2018. That’s why European growth accelerating, which would normally be considered great news, is bad news. The faster the Eurozone grows, the higher the likelihood the ECB will end its program.

The rest of this article will discuss the Fed’s Minutes which were released on Wednesday from the FOMC meeting a few weeks ago. I had been waiting for the Fed’s meeting in June for the details of the unwind of the Fed’s balance sheet, but some of them came early in the Minutes report. At first the worry was how disjointed it seemed the Fed was on the details of the unwind. Now it appears most of the members are on the same page. The plan is to set caps for the amount of bonds which can roll off the balance sheet. This stabilizes the pace because the amount of bonds which are unwinding is lumpy. The plan is like the tapering of QE.

The Fed plans to set caps for three months at a time. The caps will be steadily raised every three months. They’ll start out small by the end of the year or early next year. The one question which is left unanswered is what the end goal of the unwind will be. Frankly, I think a recession will occur before the unwind is finished, but this guidance would affect markets. The market could price the sales in perfectly if an exact size was given. The size of $2.5 trillion has been floated around, but it’s too early to tell. The Fed probably wants to see how the unwind goes before announcing what the final balance sheet will look like.

The framework questions about the balance sheet unwind have been answered. Traders can front run the unwind of the balance sheet when it starts. The difficulty is determining whether increased supply of bonds raises or lowers prices. You’d think it would lower prices based on the rule of supply and demand, but the market is more dynamic than that. In the long-term I am very certain that the balance sheet will go up. Any short-term decline is a pitstop. Maybe that thought process is why bonds don’t selloff on the news of an unwind. The chart below shows the historical basis for my opinion on why central bank balance sheets will always expand. Once you take out the financial bazookas, it’s difficult to put them away. The only major unwind in this chart was the ECB in 2013 and 2014. That was followed by a huge upswing in QE as the ECB now has a larger balance sheet than the Fed and the JCB. (To be clear the orange line is the ECB. The white line is the Fed. The blue line is the Bank of Japan.) 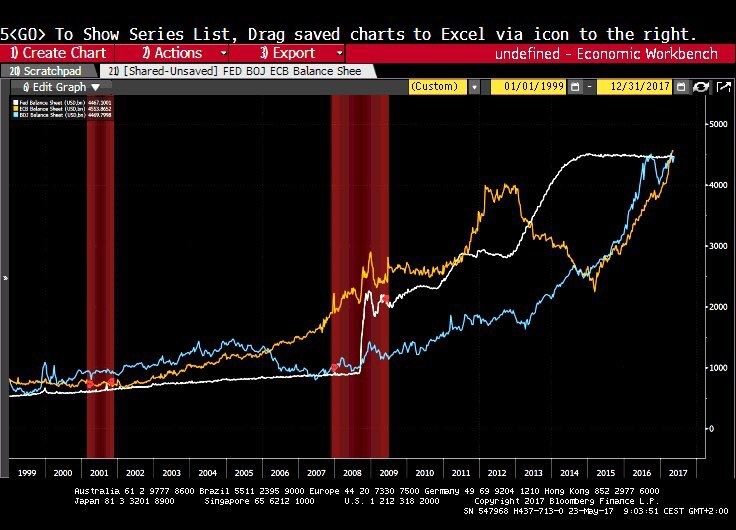 The other points made by the Fed about the economy were mainly incorrect. The Fed said that the weather didn’t cause the Q1 weakness, but the weakness was transitory. Even though the term transitory has become a meme for the Fed to explain away anything it wants to ignore, this cycle has grown in fits and starts, so transitory deserves to be a popular term. The biggest problem I have with saying the weakness was transitory is that I disagree with the determination automobile sales were weak because of the increase in sales in Q4. Sales were weak because demand was weak and because default rates rising caused banks to tighten standards. I think the cycle is turning over. The Fed needs to see more declines before calling it a long-term headwind to GDP growth.

The Fed is ignoring the business cycle by claiming sales were unsustainably high in Q4. It’s a weird statement because it doesn’t specify what sales level is sustainable. The reality is no level of auto sales will ever be sustainable because sales works in cycles. In a normal business cycle, there is either deceleration or acceleration. There is little stability.

The Fed’s balance sheet has been much more stable than the BOJ’s and the ECB’s in the past few years. That is about to change as the much delayed unwind is about to start in the next few months. The Fed will unwind the balance sheet until something breaks. Rate hikes used to be bearish for stocks, but the market is taking the expected June hike in stride. It’s as if the hike cycle doesn’t spur recessions anymore.