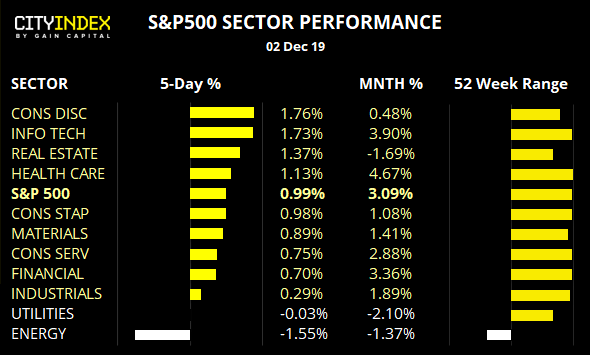 As my colleague Kelvin Wong noted, there are no clear signs of exhaustion on the SP500 which sits just off record highs. Whilst Friday was a bearish close, it warns of a minor pullback at best as there is no evidence of a topping pattern. Moreover, the SP500 E-mini’s are retesting record highs following strong PMI data from China today.

Info tech remains the dominant sector in 2019, having rallied +41.8% YTD, whilst Consumer Services and Financial sectors take 2nd and 3rd place as 28.4% and 26% respectively.

Energy remains in the doldrums, having gained a mere 1.7% YTD. 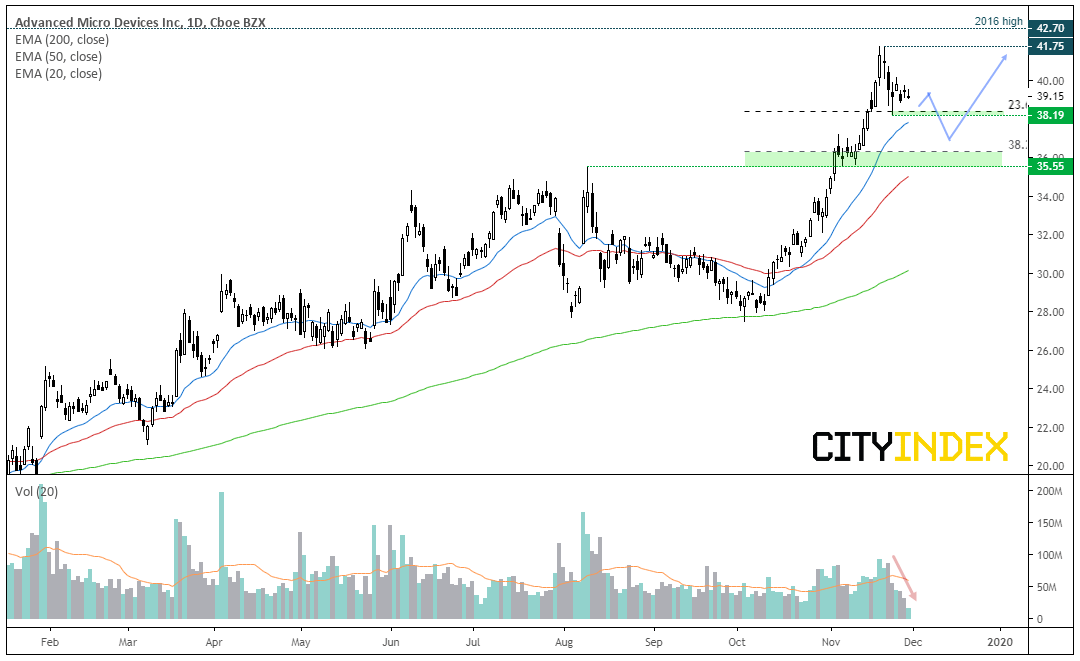 Advanced Micro Device CFD/DFT: A performing stock in a performing sector, AMD has rallied an impressive 112% year to date. Since touching a record high of 41.75 in November, prices have moved lower but on thinner volumes to suggest the move is corrective, so we’re looking out for new level of support to build before it breaks to fresh highs. 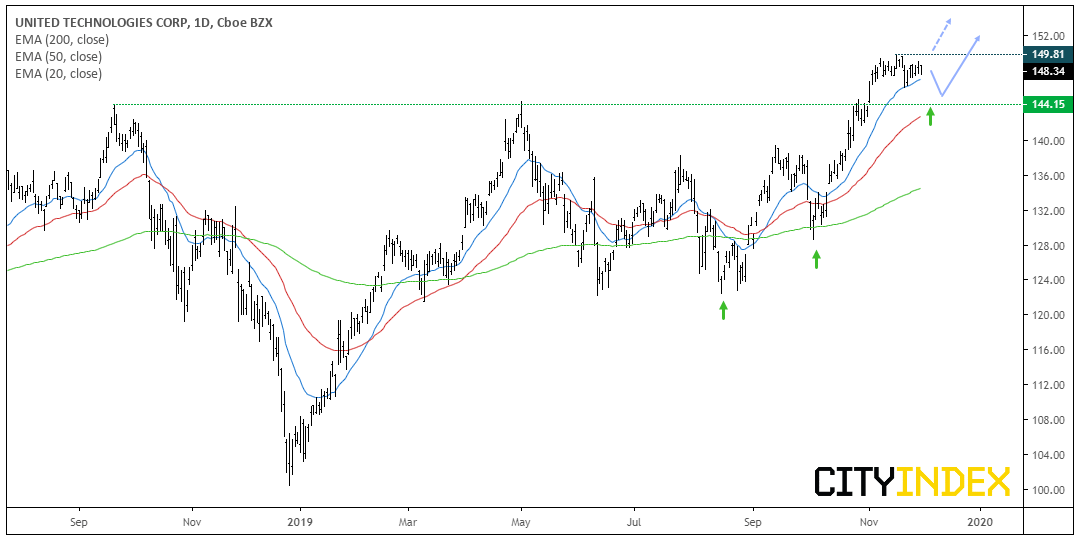 United Technologies CFD/DFT: Prices are consolidating just below record high, and the 20-day eMA is providing support. At the beginning of November we saw a break of key resistance around 144, and the bullish trend from the September low appears to be an impulsive wave. Due to strength of momentum leading into the current consolidation, we expect prices to eventually break higher.

Apache Corp CFD/DFT: The SP500 Energy index is the worst performing sector over the last 12 months (and the only one to trade lower over this period). At -15.1% YTD, Apache is not the weakest is underperforming relative to the sector although no oversold to the point it could not go lower from here.

A series of lower highs below 38 shows bearish momentum is building and Friday’s bearish candle suggests prices could be headed lower.

Nisource CFD/DFT: Momentum since the 2019 high has been predominantly bearish, with losses coming quite hard and fast. Support was recently found at the February low around 26, and prices have retraced higher although Friday’s bearish hammer suggests the corrective. That the bearish hammer stalled beneath the 26.38 resistance and 38.2% Fibonacci levels adds further weight to the corrective move nearing its completion.

J.P. Morgan Chase CFD/DFT: Trading just off record highs, there are signs of exhaustion with a series of doji’s, hammers and a pinbar. Still, the trend remains bullish 127.42 so bulls could look for potential dips above this key support level to consider longs.

Cabot Oil and Gas Corp CFD/DFT: T1 was reached around $16 and prices are consolidating near multi-year lows. The bias remains bearish below $17 and for prices to move towards the 14.67 double-top target, although $15 also makes a viable target.

Autozone CFD/DFT: Resistance around 1190 remains in place and Friday produced a bearish engulfing candle / dark cloud cover reversal at these highs. Ultimately it could either be in a wide, oscillating channel which could be confirmed with a break below 1150 but, if 1150 holds as support and it breaks higher, it can be assumed momentum has realigned with the longer-term bullish trend.

Verisk Analytics CFD/DFT: It blow past the resistance zone, so has been removed from the short watchlist.