Whether you are an investor or not, you will have no doubt been aware of what started on Wall Street and spread throughout the global stock market in new phenomena which had been a game-changer in the battle of retail investors vs the big boys.

GameStop GME dominates the headlines as the hedge funds and retail traders go head to head.

This is where the focus will be for the week (s) ahead amongst some lesser compelling earnings and economic data along with what has become the norm in a life of coronavirus.

The SPX dropped 3.3% last week for its worst stretch since late Oct.

The index is now in the red for the month as 'traditional' investors move to the sidelines and standby, (chewing on popcorn), watching the spectacle play out around the world's stock markets.

Erratic trading in stocks is never a good thing, on the whole, for the benchmarks prefer a conventional and dependable flow in a standard risk-on environment.

Last week, GameStop (GME ) and AMCEntertainment (AMC ) stirred up worries about market stability and potential manipulation at a time when new variants of COVID-19 and stumbles with vaccine distributions had also been weighing.

After all, when a stock rallies from $17 to nearly $500 over a number of day's, everyone, including your taxi driver, is talking about it.

The GameStop rally came after investors saw glimmers of hope for the company this month when the chain changed the makeup of its board of directors.

However, the stock got its big kick when Reddit's r/wallstreetbets community fawned over a Nov. 16 letter from Cohen to the GameStop board he would later join.

This occurred after some brokers imposed trading limits on the stock as the frenzy put enormous pressures brokerages such as Robinhood that have been attempting to keep up.

On Friday, the stock rallied again and soared nearly 68%.

The stock made a high $413.98 to close at $325 as the amateur day traders on the likes of Reddit's r/wallstreetbets community. 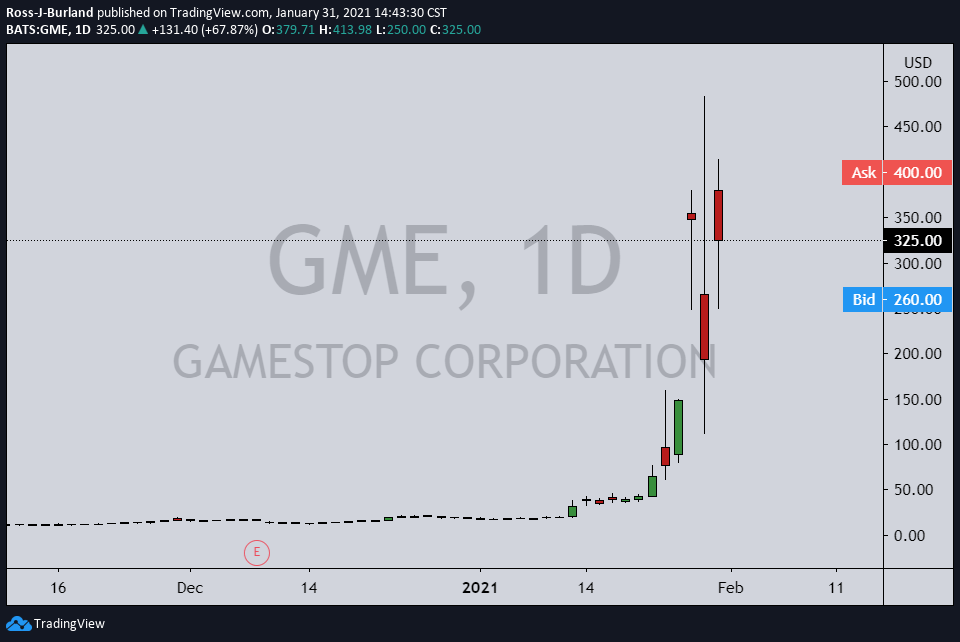 The community is growing and now has 6 million members.

It continues to bet against the short-sellers as they encourage each other to pile into shares and call options, creating another massive short squeeze.

Moreover, institutional money has most probably started to flood in as well looking to take advantage of the trapped shorts in a market that still has plenty to go.

However, what is really compelling is that GameStop shares that have sold short have declined by just about 5 million over the last week, marking an 8% dip in the short interest.

This says that short sellers are mostly holding onto their bearish positions or they are being replaced by new hedge funds willing to bet against the stock.

“I keep hearing that ‘most of the GME shorts have covered’ — totally untrue,” said Ihor Dusaniwsky, S3 managing director of predictive analytics. “In actuality, the data shows that total net shares shorted hasn’t moved all that much.”

“While the ‘value shorts’ that were in GME earlier have been squeezed, most of the borrowed shares that were returned on the back of the buy to covers were shorted by new momentum shorts in the name,” Dusaniwsky added in an email for which CNBC has reported.

''GameStop remained the most-shorted name in the market as short interest as a percentage of shares available for trading stands at 113.31%, S3 said.''

Meanwhile, this hasn't stopped with GameStop and the mania has gone global, "whipsawing stocks from Amsterdam to Sydney," Bloomberg reported.

Other companies that are suffering heavily during the pandemic are seeing their shares soar as people talk them up.

The companies include AMC Entertainment, the beleaguered theatre chain, which shot up more than 300% on Wednesday and American Airlines, which soared more than 30% Thursday morning.

With the stock market near all-time highs, there had already been worries that a bubble was coming.

"The danger, as the dot-com bubble showed, is that Mr Market can rationalize just about anything and build it into a narrative," The Wall Street Journal's Jon Sindreu wrote.

Indeed, the frenzy over GameStop has gotten the attention of international lawmakers and regulators who have issued a stern warning for anyone trying to game the market.

The Securities and Exchange Commission said in a statement Friday that it is “closely monitoring the extreme price volatility of certain stocks trading prices.

The Commission is working closely with our regulatory partners … to ensure that regulated entities uphold their obligations to protect investors and to identify and pursue potential wrongdoing,” the statement read.

“We will act to protect retail investors when the facts demonstrate abusive or manipulative trading activity that is prohibited by the federal securities laws.”

This will not stop at Gamestop

This isn't just about making money.

The coronavirus pandemic and subsequent lockdowns have encouraged an unprecedented spike in data traffic as hundreds of millions of the global population are now turning to technology for communication and livelihoods.

This includes new means to create money and day financial markets trading is a big one which was already proven to drive massive stock market gains last year.

Moreover, Judging by the Reddit threads and alike, there is a huge movement in the millennial generation who just want to poke a middle finger at Wall Street.

On Reddit, one member of wallstreetbets, wrote early Thursday:

"GME is about sending a message. ... For all the recessions they caused. For all the jobs and homes people have lost. For all the people that can't pay for college because the minimum wage has stagnated while wall street gets rich. For all the retail traders they left holding the bag. For all the times they got bailed out with our tax money while we got nothing."

"I am proud to be a part of this piece of history with you. ... Call it an opportunity, call it revenge, or justice, I know we are on the right side of this."

Another member wrote that Reddit traders were part of a resistance movement of sorts:

"This is not a war on billionaires, the wealthy yada-yada, but it may well be described as a resistance against injustice, inequality, rigged rules, uneven playing field etc which has been rampant on Wall Street forever."

Then, the icing on the cake comes with Rep. Alexandria Ocasio-Cortez, D-N.Y., a member of the House Financial Services Committee, who weighed in on the GameStop phenomenon and tweeted last week:

"Gotta admit it's really something to see Wall Streeters with a long history of treating our economy as a casino complain about a message board of posters also treating the market as a casino.''

Sen. Elizabeth Warren, D-Mass., on Wednesday, while calling on market regulators to clamp down, said:

"For years, the same hedge funds, private equity firms, and wealthy investors dismayed by the GameStop trades have treated the stock market as their own personal casino while everyone else pays the price," she said in a statement. "It's long past time for the SEC and other financial regulators to wake up and do their jobs — and with a new administration and Democrats running Congress, I intend to make sure they do."

Meanwhile, the most obvious step would be to presume that the buying community will have grown over the past few days as the phenomena spread to those looking to make a quick and easy buck, especially in these hard times.

Below are the 25 stocks with the highest short interest, or percentage of shares outstanding sold short, on the major exchanges as of 28th Jan: 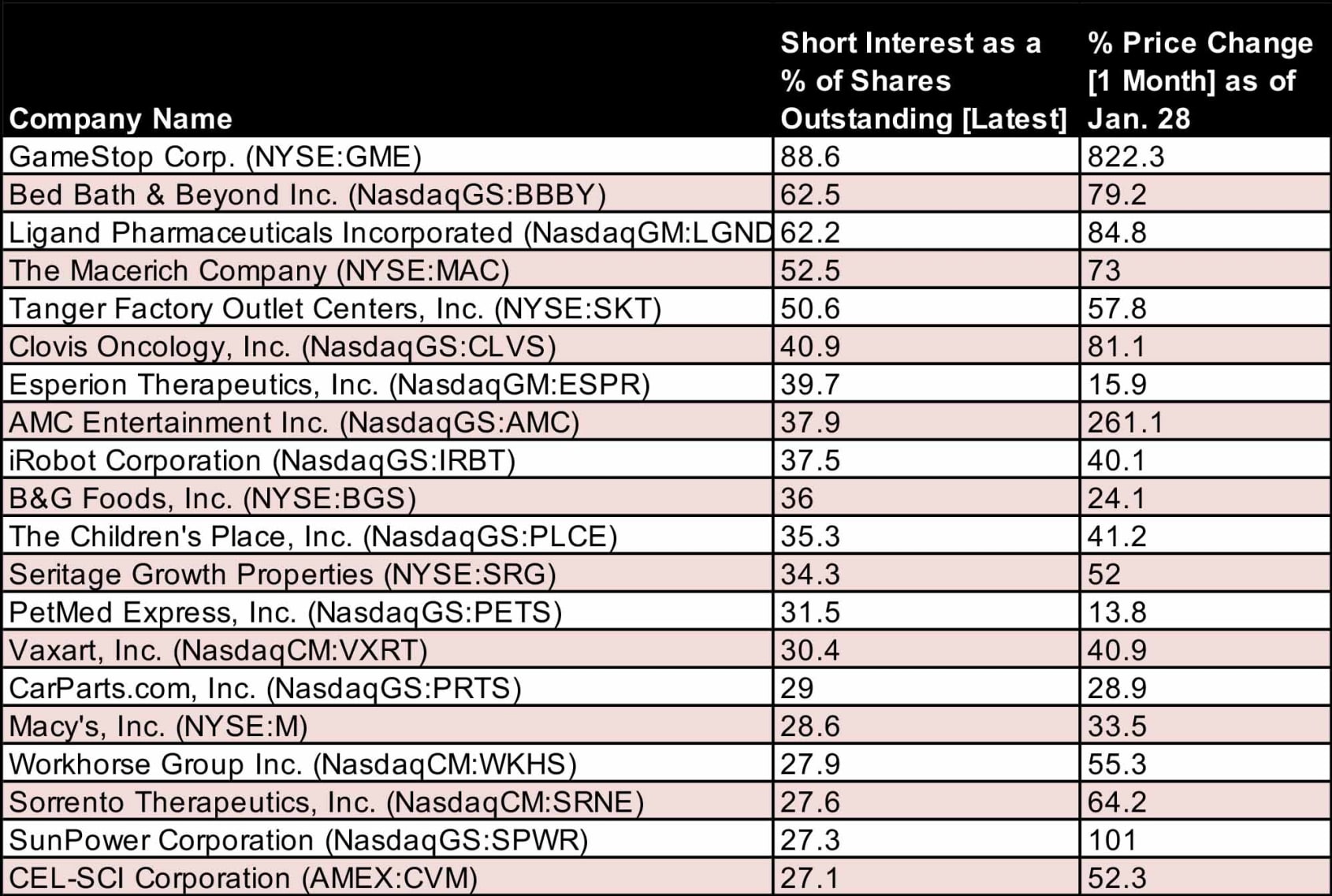 But be forewarned that this list is for informational purposes only and the old adages, buy the rumour sell the fact, and, to do the opposite of the herd, could well be played out if they have not already started to do so.

However, that is not to say that the frenzy will end anytime soon.

Albeit, rather than seeing a paradigm shift overnight, it may only occur from time to time, but be a prominent theme in markets for the foreseeable future.

Given that there is still a huge percentage of shorts out there and ongoing jawboning in the on-line forums, this may not be a pump and dump play in the likes of Gamestop.

This is a movement and the media ramp will be sure to keep the interest in this play on the front pages.

Broker restriction and regulatory news will be at the forefront of this theme for plenty of weeks to come.

Meanwhile, health authorities identified COVID-19 cases in the US with the variant first detected in South Africa which is likely to dampen the mood for the week ahead.

The finding added to concerns at a time when preliminary research has indicated existing treatments and vaccines for COVID-19 may be less effective against the South African variant.

The economic calendar, meanwhile, includes data on manufacturing and services sectors earlier in the week although January employment figures are likely to garner the most attention.

Eyes will be on the private-sector data will come Wednesday from ADP while the Labor Department will release its January jobs data in the Nonfarm Payrolls on Friday.

From a weekly perspective, the stock market is on the verge of a collapse towards a 61.8% mean reversion of the last bullish trend from October's business.

The major support between here and 3660 will be a critical area for the week ahead.

Similarly, AUD/JPY is one to watch in the forex space.

Last week, the market failed to comply with the Chart of the Week's analysis, at least from a trading point of view.

The daily M-formation drew in the demand from breakout levels in striking volatility.

Now that the M-formation has completed in the bullish spike, should resistance hold, 0.78.6% Fibo, on a daily and or weekly closing basis, the bearish thesis will remain in play: 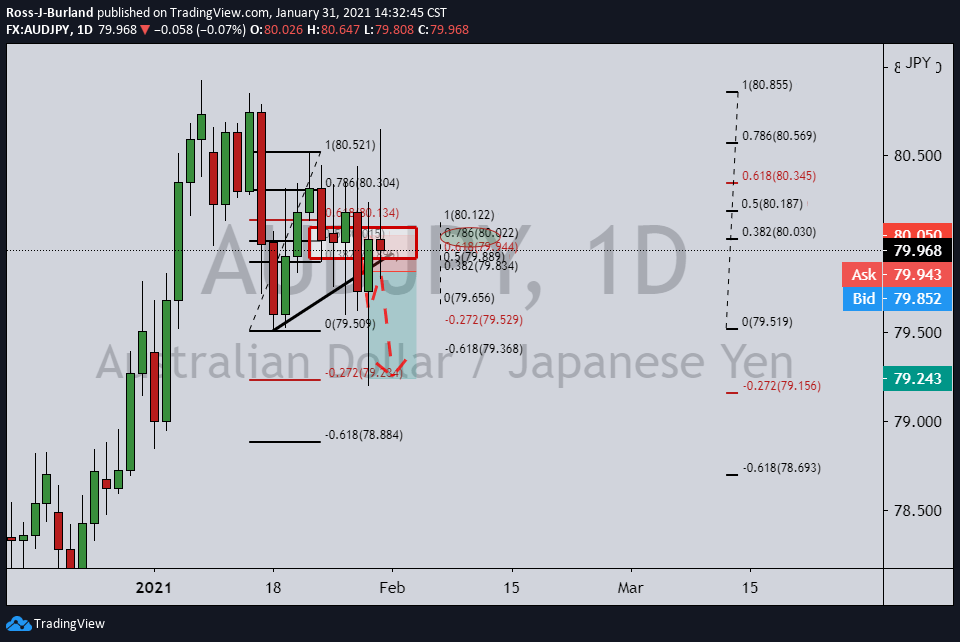 The next frenzy, Silver?

In the open, we have seen the Reddit-movement target silver again, with a 'moon' target of $1000. 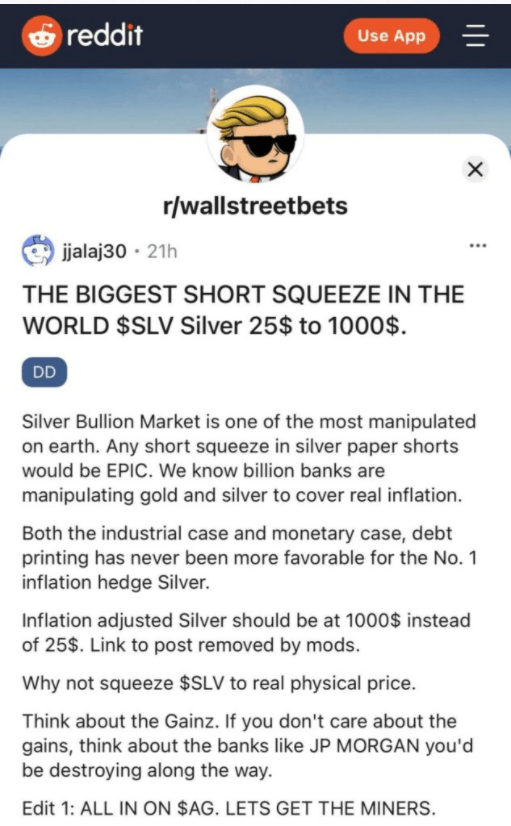 In any case, the price has rallied as call option gamma squeeze can affect the futures markets and move the physical and spot price.

The technical analysis is as follows:

The Chart of the Week: The Silver rush and big short squeeze kicks-in