Stocks are breaking down! The S&P 500 index fell almost 1% on Friday and today it is poised to open 1.8% lower. Are we getting close to a local low?

The broad stock market index broke below its short-term consolidation on Friday, as the S&P 500 index fell below its recent local lows along 4,450 price level. On September 2 the index reached a new record high of 4,545.85. Since then it has lost almost 120 points. This morning stocks are expected to open much lower following big declines in Asia and Europe after news about Evergrande Real Estate Group crisis in China. 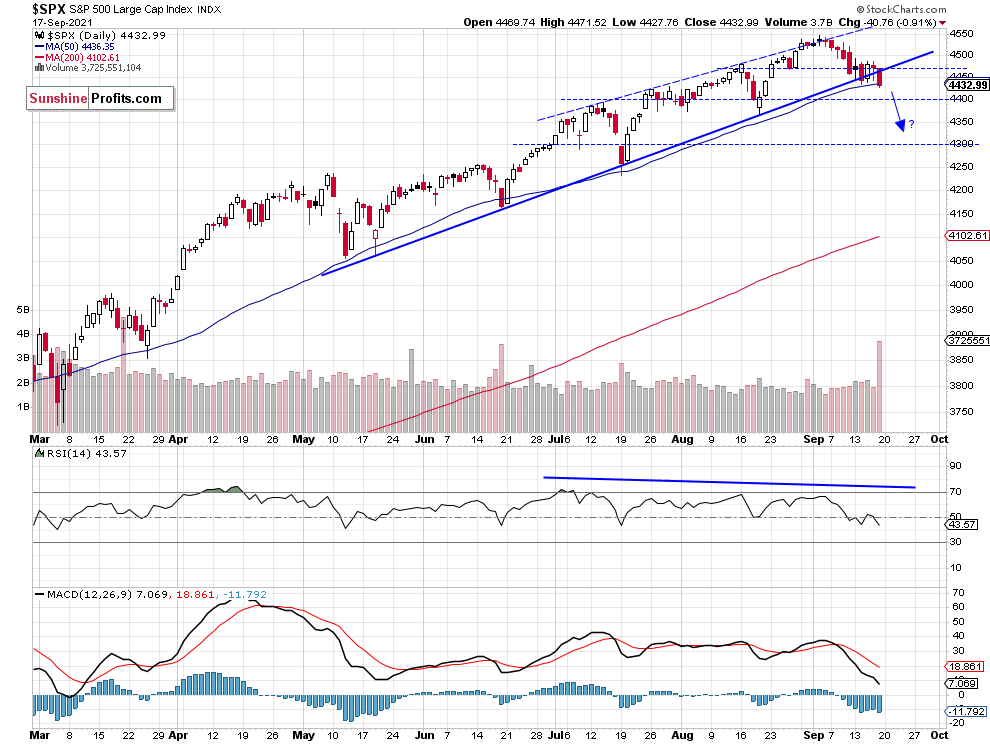 Let’s take a look at the Dow Jones Industrial Average chart. The blue-chip index broke below a potential two-month-long rising wedge downward reversal pattern recently. It remained relatively weaker in August - September, as it didn’t reach a new record high like the S&P 500 and the Nasdaq. Today it may sell off to 34,000 level or lower. The next support level is at around 33,250-33,500 and the resistance level is at 34,500, marked by the recent support level, as we can see on the daily chart: 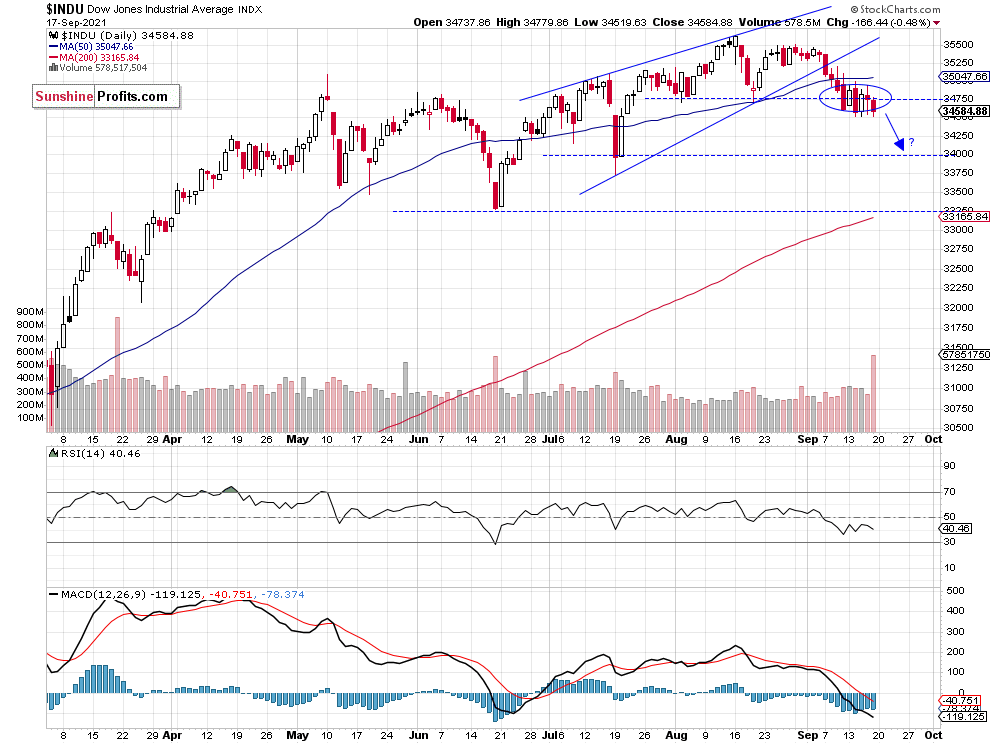 Apple stock weighs around 6.3% in the S&P 500 index, so it is important for the whole broad stock market picture. In early September it reached a new record high of $157.26. And since then it has been declining. So it looked like a bull trap trading action. We can still see negative technical divergences between the price and indicators and a potential topping pattern. The stock is breaking below an over two-month-long upward trend line. 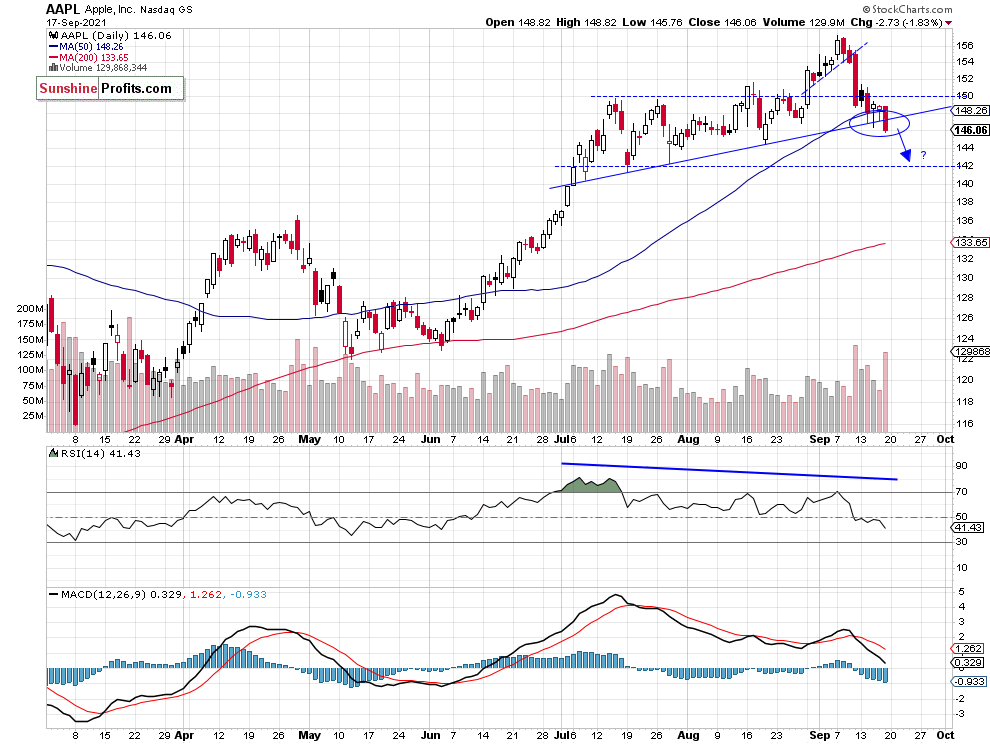 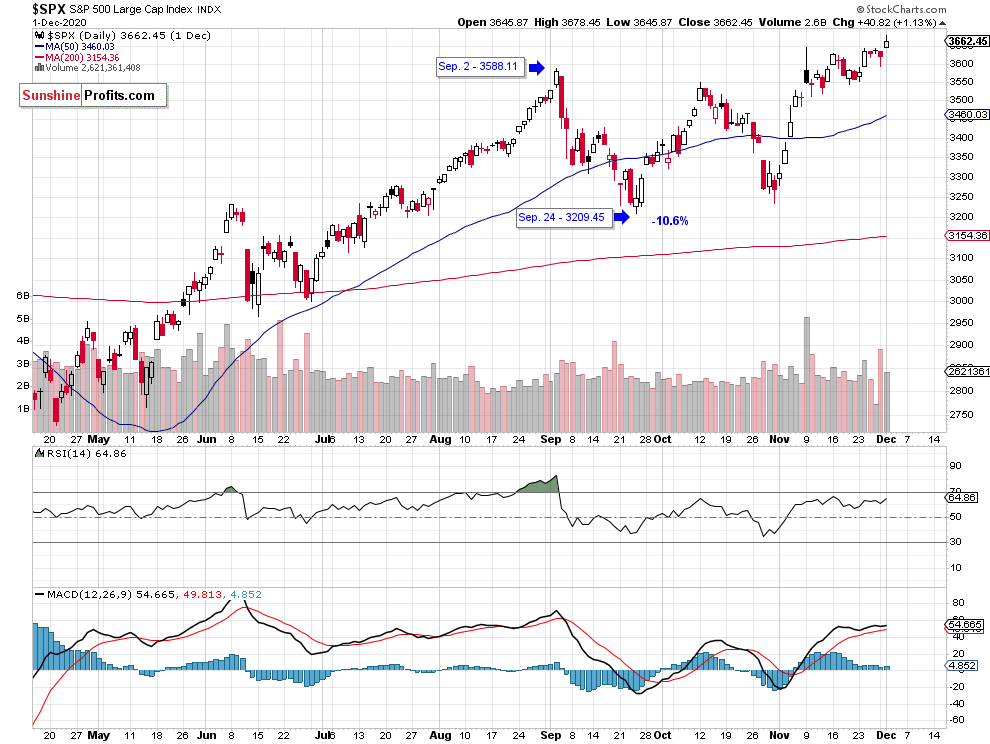 The S&P 500 index broke below its short-term consolidation on Friday and today it will most likely accelerate the downtrend from the early September record high. However, later in the day we may see some short-term/ intraday bottoming trading action.

The market seems overbought, and we may see some more profound downward correction soon. Therefore, we think that the short position is justified from the risk/reward perspective.

EUR/USD treads water around 1.1600 after US data

EUR/USD continues to fluctuate in its daily range around 1.1600 as the latest data releases from the US failed to trigger a meaningful market reaction. New Home Sales in the US surged by 14% in September and consumer sentiment improved in October.

GBP/USD surged past the 1.3800 mark during the first half of the European session and shot to three-day tops on the back of upbeat UK data. Investors now await macroeconomic data releases from the US and the next phase of Brexit negotiations.

MATIC price is breaking out of an ascending triangle pattern, hinting at a 150% ascent. Transactional data shows barely any resistance level ahead for Polygon, suggesting a swift move higher. The Layer 2 solution has been at the center of DeFi evolution.

NYSE:AMC gained 0.63% during Monday’s trading session. Meme stocks rally on Monday as momentum carries over from the previous week. AMC CEO Adam Aron hints that the company could be getting into the cryptocurrency business.