Euro and sterling traders should be prepared for a wild ride tomorrow as U.K. voters head to the polls and the European Central Bank delivers its latest monetary policy decision.  We saw big intraday swings today that gave investors a taste of the exaggerated moves they can expect over the next 24 hours.  There's a lot of uncertainty surrounding tomorrow's European Central Bank rate decision and the U.K. snap election.  ECB meetings are always important but this month they release their latest economic projections, which will shape the market expectations for tapering.  The strength of the euro is a sign of confidence.  Although a draft of the ECB projections showed lower inflation forecasts, investors are looking beyond this dip and hoping for optimism from President Draghi.  Lower inflation forecasts and higher GDP estimates are pretty much a given. The question lies in the central bank's risk assessment and Draghi's guidance. Currently the ECB sees the risks tilted to the downside but if they upgrade the assessment and describe them as broadly balanced, we could see a sharp rally in the euro.  However if their risk assessment remains unchanged, the currency could be brutally punished.  The staff forecasts are shared by Draghi so expect the volatility in euro to pick up after 8:30am NY time / 12:30 GMT.

Taking a look at the table below, we've seen widespread improvements in the Eurozone economy. Aside from the latest decline in retail sales and German consumer price growth, Eurozone consumer spending is up, labor market conditions improved with economic activity accelerating across the board.  Even ECB President Draghi acknowledged the improvements in the economy although he also stressed the need for accommodative policy because the strong euro could create headwinds for inflation and growth. If the ECB lifts both its GDP forecasts and shifts its risk assessment, EUR/USD will soar above 1.13 and see 1.1385 quickly.  However if they cut their inflation forecast and leave the risk assessment unchanged, EUR/USD will sink below 1.12. 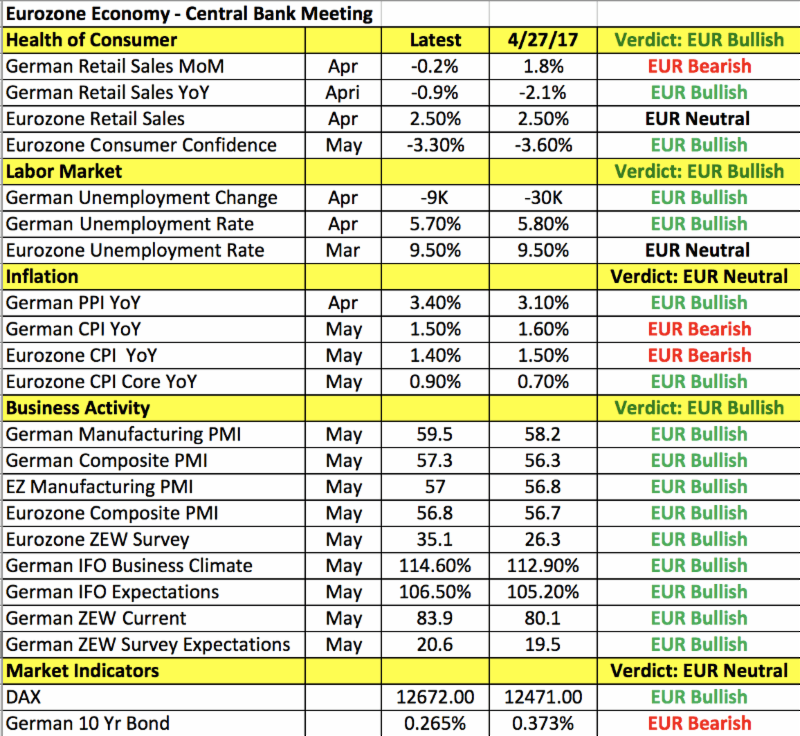 The strength of sterling is also a sign of the market's confidence in a victory by Prime Minister May's party.  Despite her many stumbles, the very latest polls show Theresa May and the Conservatives with a 10% lead which is likely to produce a 350 seat Tory majority in the UK Parliament and give PM May greater maneuverability to negotiate Brexit terms. The polls open at 7am local time and close at 10pm. The initial results will be released shortly thereafter but the election generally isn't called until 1am local time which is around 8pm NY time or 00:00 GMT.  This means the big move won't happen until after the NY close. It is important to remember that this election was called by May to strengthen her hand during Brexit negotiations. If she loses, it would be an embarrassing and damaging feat.  If she wins with a 50+ seat majority, the process of Brexit would be a lot smoother as it would allow her to overcome the skepticism of those inside and outside her party. The former scenario would be very positive for the currency and we could see GBP/USD break 1.30.  The latter would be problematic and could send GBP/USD back below 1.28.

The U.S. dollar traded lower against all of the major currencies today except for the Japanese Yen.  There were no U.S. economic reports released today but U.S. rates crawled higher throughout the North American session.  USD/JPY may have also benefitted from diversification flows ahead of tomorrow's big event risks.  Although USD/JPY could touch 110, today's relief rally should be capped by Tuesday's high near 110.50.  There are reports that Japan could upgrade its economic assessment this month but the news had little impact on the currency. Aside from jobless claims, there are no U.S. economic reports scheduled for release on Thursday.

The Canadian dollar traded sharply lower against the greenback as oil prices dropped 5%. The collapse in oil was driven by an unexpected rise in inventories. Investors had anticipated a decline and the increase was the straw that broke the camels back. In the past few weeks, OPEC nations extended their production cuts but not as much as investors had hoped, President Trump pulled the U.S. out of the Paris Climate Accord while Gulf States cut ties with Qatar.  Oil prices have been under pressure throughout this time but it took today's 5% drop to send the Canadian dollar lower. USD/CAD is now trading back at 1.35 and a move above 1.3530 would confirm the trend change.  The Australian and New Zealand dollars also moved higher following stronger Australian GDP numbers but the rally was capped ahead of Australian and Chinese trade numbers, which are due for release this evening.