Inflation worries have intensified, gold started to rally on Friday… and then Powell came, ruining the party and killing the bullish vibe.

Friday (October 22, 2021) started wonderfully for the yellow metal. Gold was appreciating since early morning, and it even jumped above $1,810 around 10-11 A.M. New York Time. As the chart below shows, the London P.M. Fix was above $1,800, the key psychological level under which gold has been stuck recently. 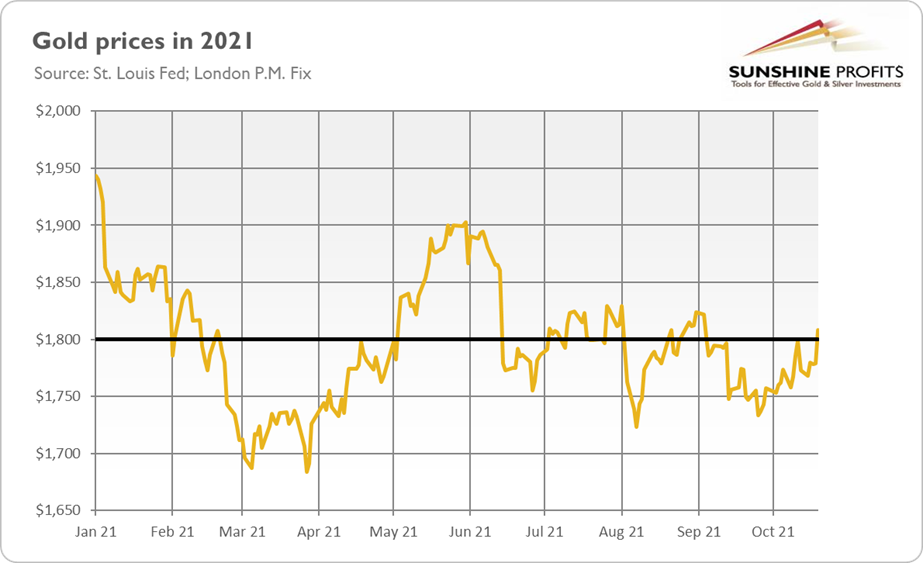 Unfortunately, the joy was short-lived. Gold dived again below $1,800 later on Friday. What was the reason? Well, it might be just inherent weakness and inability to overcome its resistance level. But it seems that Jerome Powell contributed to the drop, if not triggered it.

He participated in an online conference hosted by the South African Reserve Bank on Friday, making remarks that were considered hawkish. What did Powell say? Well, he reiterated that the Fed is on track to start tapering its asset purchases this year and that the whole process is expected to end by mid-2022.

However, Powell downplayed the inflation threat. Even though he acknowledged that risks were growing and that “elevated inflation [is] likely to last longer than previously expected and well into next year”, he also said that supply-chain issues would eventually be resolved and inflation would fall back to the Fed’s target of 2%. As a consequence of Powell’s remarks, the price of gold declined roughly $30, from almost $1,815 to $1,785. The yellow metal rebounded slightly later, but it was unable to return to $1,800.

What is happening in the gold market right now? Well, it seems that inflation worries have intensified recently, and gold started to grow (a bit timidly, but still) on those fears. Unfortunately for gold bulls, Powell threw cold water on gold’s rally on Friday. After all, the upcoming tapering of quantitative easing, as well as the cycle of interest rate hikes, could continue to create downward pressure on gold.

On the other hand, Powell also made some dovish comments, as he emphasized that the Fed was going to taper its asset purchases soon, but it wouldn’t raise the federal funds rate until the maximum employment was reached. He said: “I do think it’s time to taper; I don’t think it’s time to raise rates”.

What is even more important, Mr. Market has finally awakened from the dream about a world without inflation. In other words, investors started to question the Fed’s narrative about the ‘merely transitory’ price pressure. Given that the economic growth is going to slow down, the risk of stagflation is growing, which should support gold. 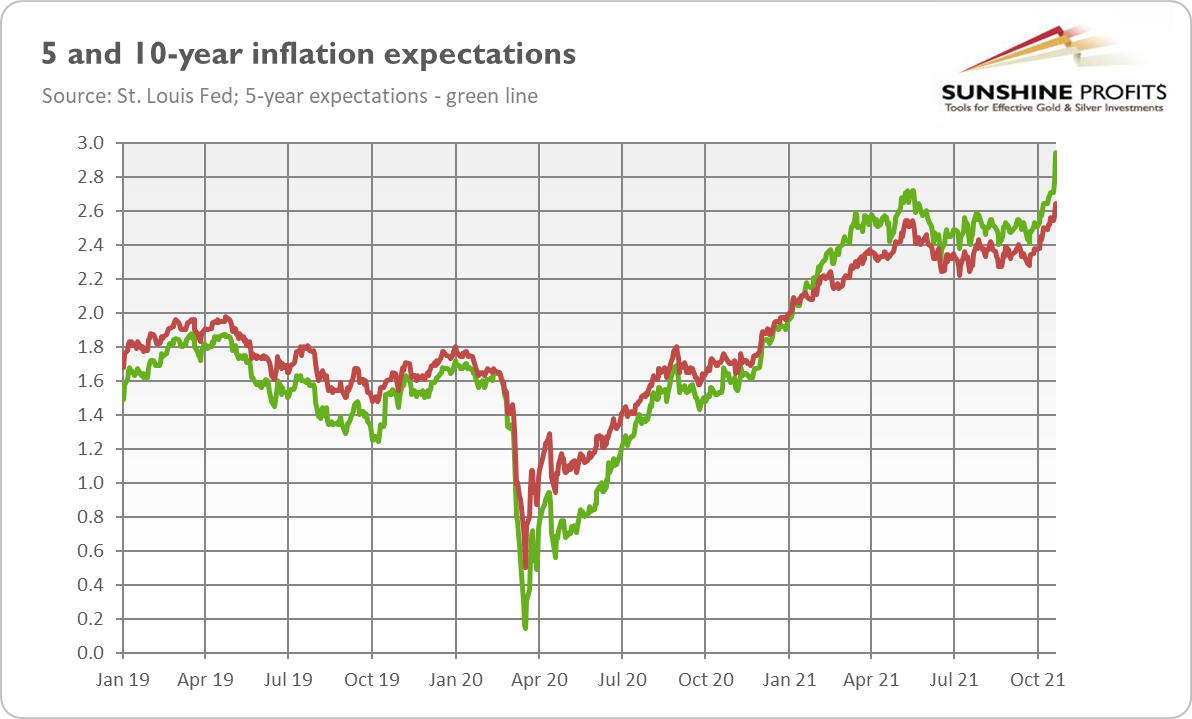 As one can see, the market-based inflation expectations rose significantly last week. The inflation breakeven rates in the 10-year bonds increased from 2.54% to 2.64%, while in 5-year bonds they jumped from 2.71% to 2.94%, the highest level since March 2005. It means that the markets expect more persistent inflation than the Fed and bet that the US central bank will stay behind the curve.

We can call it “the revenge of the supply”. Policymakers have been focused for years on the demand side of the economy, just to discover that the supply side matters too. Right now, companies all over the world are facing supply-chain bottlenecks, shortage of workers, energy crisis, transportation crisis, and semiconductors squeeze. Thus, many of them are now passing higher costs on (in the form of higher prices) to consumers, indicating even more increases down the road.

The bottom line is that rising inflationary expectations are fundamentally positive for gold prices. So far, inflationary worries have been counterweighted by the expectations of the Fed’s tightening cycle and economic recovery. However, the growth is going to slow down, while the date of the first hike is approaching quickly. Therefore, gold’s outlook should improve in the coming months.