An increase in expectations for economic growth, inflation and central bank tightening would appear to signal a bear market in bonds. Given these factors, how can the bond market avoid the bigger bear?

Over the past three years, consensus expectations have overestimated the 10-year U.S. Treasury rate. Looking ahead, a policy mix of expansionary fiscal policy and tighter monetary policy would, historically, be associated with a stronger dollar and higher Treasury benchmark rates. That is the traditional expectation that the financial markets have already discounted. However, historically, better economic growth and/or expansionary fiscal policy has not always been associated with higher bond yields. The outcome depends on the degree of acceleration in economic activity, prices and Fed actions relative to what is already discounted. Recall the taper tantrum of 2013, which led to a spike in rates due to an unexpected outcome, the removal of some monetary policy accommodation (top graph). 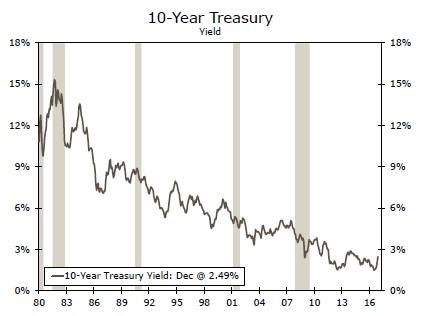 Inflation: What You Get, What You Expected

Breakeven inflation expectations for five-year and 10-year horizons have risen since election day—by 31 basis points for the five-year and 27 basis points for the 10-year. Are these adjustments just a catch-up to the past or a projection of further inflation premiums in the future? The optimistic case is that the increase in inflation will not be sustained significantly in the future. If so, then the Fed may be able to live with less than the three funds rate increases projected for 2017. Once again, over the past three years, we have witnessed FOMC members consistently over-forecast inflation as well as their response via the fed funds rate.

If inflation remains at a more moderate pace than some are currently projecting–perhaps reflecting continued seller competition, dollar appreciation, and/or more modest energy price increases–then the FOMC will not need to be as aggressive in raising the funds rate. Moreover, estimates of the neutral fed funds rate indicate that the rate remains below its historical average of prior cycles. The recent policy proposals aimed at increasing the repatriation of capital held abroad, which would boost the cash position of domestic firms as a source of funds and thus reduce business loan demand, may also support the case for lower interest rates going forward than otherwise might be the case.

Policy proposals to scale back financial regulations and reduce the tensions between regulators and the regulated may free up bank capital and allow for greater lending. Moreover, if there is a greater expectation for domestic economic growth, then both bank and non-bank credit may open up. As shown in the bottom graph, there is significant liquidity in the banking system available to increase the supply of credit if faster economic growth leads to an increased demand for credit. As a result, interest rates may not rise as much or as quickly as some analysts are projecting. Where real economic opportunity is present, credit will find its way. 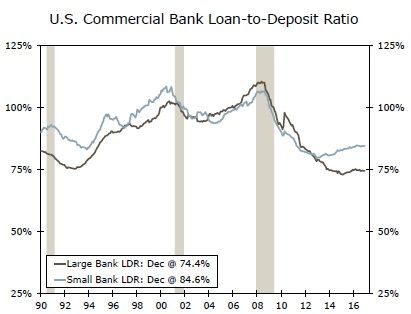 _________________
A MUST - How to trade President Donald Trump - Panel with Boris Schlossberg, Harry Dent and Joseph Trevisani. Register now here