The US will report its May employment data this Friday, and as the focus shifts to economic reopenings, forecasts indicate “improved” figures. The country is expected to have lost 8 million jobs in May, much better than the 20.5 million shredded in April. That would mean that roughly 30 million people lost their jobs amid COVID-19. The unemployment rate, however, is expected at 19.7% from 14.7%, although the unemployment rate reaching 20% has been on the table ever since the ends of March.

Average Hourly Earning are foreseen up by 8.6% YoY in the same month, almost tripling pre-pandemic levels, yet that’s the result of the sharp lost of low-income jobs amid the coronavirus crisis.  The exacerbated income inequity in the US is no doubts part of the recent violent riots going on across different states that led to President Trump threatening with a military response.

Back to employment, market players are aware of the awful expected numbers and have already priced them in. Even further, economic reopenings in Europe, which seems to be avoiding an infamous second wave of contagions, underpin the mood. Investors are focused on the upcoming economic recovery and moving beyond dismal numbers that reflect what happened in the worst of the crisis.

As said, the country lost over 20 million jobs in April, while Initial Jobless Claims continue to show that millions of Americans filed for unemployment insure month after month. However, from the over 6.6 million weekly seen mid-March, the number has been improving to roughly 2 million in these last few weeks. A positive sign came from Continuing Jobless Claims, which fell from 24.9M to 21.05M mid-May, the first positive hint since the pandemic hit the US.

Also encouraging, the ADP survey showed that the private sector shed 2.76 million positions, much better than the previous 19.5M. The official ISM PMIs showed that the employment sub-components bounced from record lows in April, but remained dip into contraction territory.  Finally, those indicators related to consumer confidence have pared their declines, stabilizing at lower levels.

Overall, there are no signs of a pick-up in employment in the near term, and speculative interest knows it. The most it can do is keep on betting on a soon-to-come recovery, despite increased fears over a potential second wave in the country as a result of the civil unrest seen these days.

The market is on risk-on mood and the greenback heads into the release trending lower against most of its major rivals, except for those considered safe-havens. Upbeat US data lately has triggered Wall Street rallies in detriment of the dollar, and there’s no reason to believe that a better-than-expected US employment report could trigger a different reaction.

Disappointing numbers could have the opposite effect, although to a lesser extent and hardly mean a dollar’s comeback.

Commodity-linked currencies have the most chances of rallying, should the data impress to the upside, while gold prices will likely extend their declines to fresh weekly lows. The Sterling, on the other hand, should be the most reluctant to post a direct reaction to the report.

The EUR/USD pair has reclaimed the 1.1200 level this week and is technically overbought. With the ECB and the NFP report in the way, market players could have good reasons to take profits ahead of the weekend, but as long as riots in the US continue and signs of economic recovery keep coming from the EU, the pair has a limited bearish scope. A daily close this Thursday above 1.1220, where it has the weekly 100 SMA, should skew the risk further up. 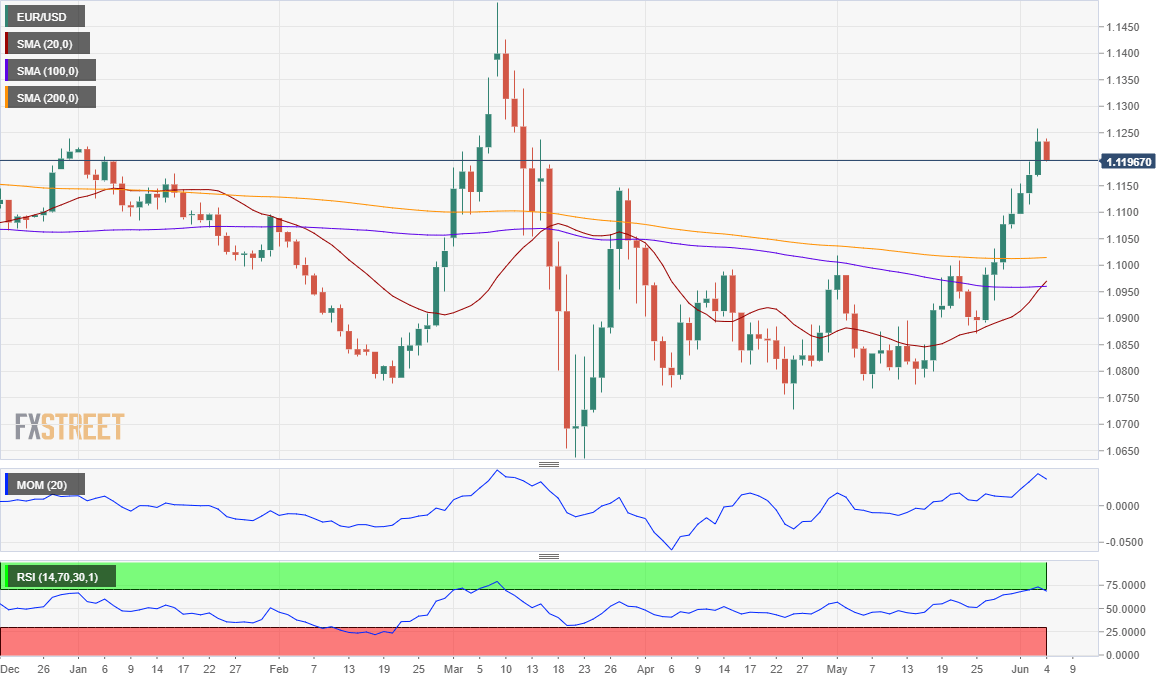