The US dollar has been enjoying strong demand these last couple of weeks, as easing geopolitical concerns and solid macroeconomic data revived hopes for a fourth rate hike this year. Indeed, inflation has been moving toward the 2.0% central bank target at a more firm pace this year. The Fed, however, has surprised many this Wednesday by introducing the concept of "symmetric" inflation. “Inflation on a 12-month basis is expected to run near the committee’s symmetric 2 percent objective over the medium term,” according to the FOMC's statement. Market players believe that is a way of saying that an uptick beyond the 2.0% target, won't necessarily trigger a rate hike as a response, somehow offsetting the optimist tone of the document.

The US Federal Reserve base its decisions on both, inflation and employment. Employment has long left being an issue, but the monthly report is closely watched, as in between, it reports wages' growth, which is related to inflationary pressures. The headline reading and the unemployment rate have been posting healthy outcomes for over three years now, and while still relevant, their relevance as market movers have faded over the past few months.  That said, if the headline figures come in-line with market's expectations, wages´ growth will have the final saying on dollar's directions.

The US economy is forecasted to have added 194K new jobs in April, a nice improvement from the previous 103K. The unemployment rate is predicted to have fallen to 4.0% from the previous 4.1%, but the critical Average Hourly Earnings is seen steady at 2.7% YoY. For the month, wages' growth is seen up 0.2%, below the previous 0.3%.

Data released ahead of the event, support a strong headline, as the ADP survey showed that the private sector added 204K new jobs in April, better than the 200K expected, while the weekly unemployment claims report showed that the 4-week moving average was 221,500, a decrease of 7,750 from the previous week's unrevised average of 229,250. This is the lowest level for this average since March 3, 1973, when it was 221,250. Also supporting a lower unemployment rate, was the Challenger Jobs Cut report, which showed that cuts fell 40.2% in April from the previous month.

Still, wages data was not that encouraging. During the first quarter of 2018, Unit labor costs in the nonfarm business sector increased 2.7% in the reflecting a 3.4 % increase in hourly compensation, below market's expectations of 2.9%. The previous quarter reading was downwardly revised to 2.1% from an initial estimate of 2.1%.

All in one, the Nonfarm Payroll report has little chances of boosting dollar's rally on its own, particularly if wages post the modest growth forecasted. The reaction of yields and equities will have the last saying in dollar's potential move after the release.

The EUR/USD pair´s daily chart shows that it stalled its decline a few pips above the yearly low of 1.1915. Technical indicators in the mentioned chart have pared their declines and are currently attempting a recovery within oversold territory, not enough to confirm a bottom. Furthermore, the pair is developing below all of its moving averages, breaking below the 200 DMA this week below the indicator for the first time in a year. The risk of a bearish breakout is still strong, as it would take at least a recovery above 1.2160, the 61.8% retracement of this year's rally, to call for an interim bottom. EUR self-weakness for sure doesn't help. Below 1.1915, the pair has the next strong support in the 1.1840/60 region, while below this last, the 1.1800 comes next. Resistances, on the other hand, are at 1.2025, 1.2060 and the 1.2100 region. 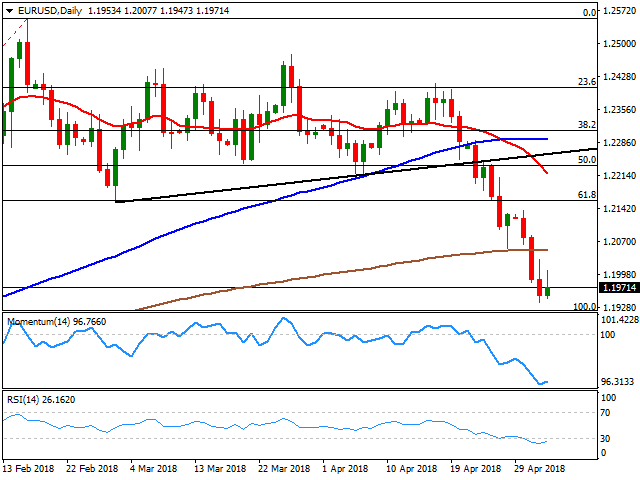