Safe-haven USD demand has been noted given the severe risk-off backdrop, which has allowed even risk-sensitive.

The Dollar is registering as the strongest currency on the day, and is even showing respective gains of 0.5% and 0.8% against the Yen and Swiss franc, the usual safe haven currencies of choice, despite the concurrent plummet in global stock markets.

Dollar gains have also come in the face of fed funds futures discounting 80% odds for a massive 100 bps Fed rate cut at its upcoming March 17th-18th FOMC meeting, although offsetting have been the ECB and BoE actions over the last day, and expected upcoming policy easing from other central banks, including the BoJ next week, among many others. Another reason for the dollar’s return to perkiness is that the dollar itself is a safe haven currency, given the underpinning of the biggest most liquid triple-A sovereign bond market in the world. 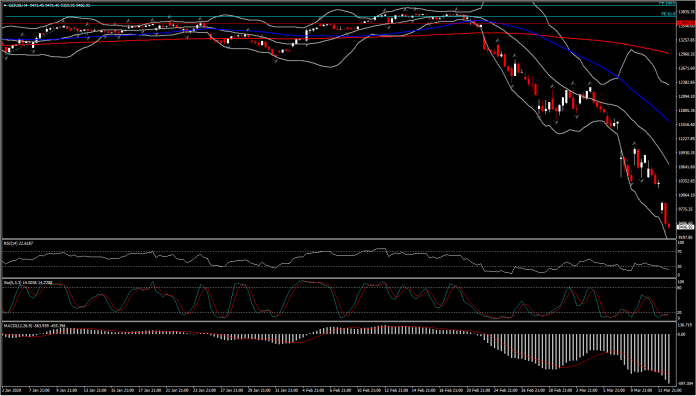 The reason for the Dollar’s recent several-week phase of underperformance stemmed from a dynamic in EURUSD, specifically the unwinding of euro shorts that had been used as funding for carry trades during the good times of record stock market heights. This force, which lifted EURUSD about 5% higher from the 35-month sub-1.0800 lows that were seen on February 20th, has now ran dry at a time when Eurozone’s fundamentals are starting to look ugly. The nationwide lockdown in Italy, a weak link in the Eurozone, is a major concern. 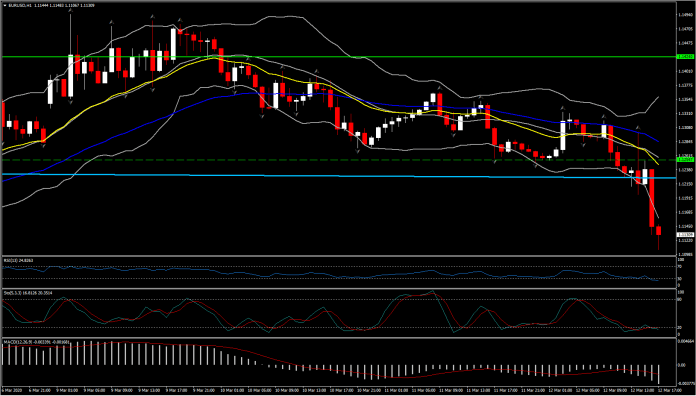 BTP yields have surged in recent sessions with the nation facing debt refinancing amid forecasts that the world’s eighth largest economy is heading for a deep and long-lasting recession. GER30 below 10000 mark after ECB fails to cut rates. The GER30 is now down 8.6%, the IBEX 35 down even 9.2% after the ECB added stimulus, but failed to deliver the hoped for rate cut. Lagarde said today’s decision was unanimous and officials thought that additional QE was the most effective response to “market sensitivities”.

Commission will use all the tools at its disposal to support economy. As the ECB announced its liquidity boosting measures, EU leaders gave the Commission a mandate to further step up the repsonse to the Coronavirus, or Covid-19 outbreak, on all fonts. On the health front the Commission has announced a series of measures and mobilised EUR 140 bln in public and private funding on research for a vaccine. On the economic front there is a new Coronavirus Response Team, which has called on all EU Member States for a coordinated fiscal response. So the measures announced at national level so far are likely to be complemented by a EU wide response, which like the ECB’s action will likely focus on providing short term funding and liquidity, with the help of guarantees and government backing. Concrete ideas are to be discussed by the Europe next Monday. There will also be a “Corona Response Investment Initiative” directed at health care systems, SMEs, labour markets and other vulnerable parts, which is set to reach EUR 25 bln quickly. EUR 7.5 bln are hoped to be freed by the Council and Parliament in the immediate future to ensure “that the money starts flowing in the coming weeks”.14:07 GMT ECB highlights “flexibility” in new QE program. Lagarde now clarified why the new QE program doesn’t give monthly purchase volumes, but an overall envelope of EUR 120 bln until the end of the year. With the ECB tied to purchases according to the capital key, the longer time frame it seems means that the central bank only aims to reach capital keys by the end of the year. So for now the ECB can focus on stabilising peripheral markets and bring in spreads, with the hope clearly that by the end of this time frame, things will have calmed down sufficiently to balance the books. Furthermore, corporate bond markets are the main focus in this program and again, Italy seems the country most at risk at the moment.

EUR/USD pulls back from one-month high

EUR/USD has backed off from one-month highs reached during the early Asian trading hours, possibly tracking signs of nervousness in some of the Asian markets. Risk assets remain vulnerable to Sino-US tensions despite the coronavirus vaccine news.

When are the UK CPIs and how could they affect GBP/USD?

GBP/USD eases from intraday top of 1.2587 while defying the previous two-day losing streak. The pair’s recent gains could be attributed to the increasing hopes of further stimulus from the UK government as well as broad US dollar weakness. Focus on UK CPI data.

Gold consolidates the recent pullback well above the $1800 mark, as the coronavirus vaccine hopes boost the equities and downs the greenback. Are gold bulls bidding up for a test of the multi-year highs?

The Bank of Canada will have a monetary policy decision this Wednesday, the first lead by new Governor Tiff Macklem. A couple of weeks ago he offered his first speech as governor, and reaffirmed that the primary mission of ...

WTI faces rejection at key hurdle despite decline in US inventories

WTI surrenders gains after facing rejection at key trendline hurdle. Fears that OPEC+ may ease output cuts look to be capping the upside. The black gold rose nearly 0.5% on Tuesday, as US crude inventories fell by 8.3 million barrels in the week to July 10.