Outlook: We have conflicting data in the US that shows recession is being staved off. Consumer confidence is up, durables were better than expected, new home sales soared. It’s almost as though the average person has no idea we are supposed to be getting a recession sometime awfully soon and conditions will be dreadful, and by the way, who gives a fig about the Fed? Pending home sales today might give a clue about whether the giant rise in new home sales is a fluke.

Economists–the gloomy profession, remember–see things differently. The latest GDPNow forecast for Q3 from the Atlanta Fed is unchanged from last week at a measly 0.3%, and that because capital spending was less negative. Finance types concur--the 2/10 yield curve is inverted to the tune of -0.33%. Even that is less bad--it was -0.51% last week.

Does this mean recession is deferred, denied or what? The consensus is pretty solid it’s coming, and yet aside from some big companies paring payrolls, lurking in the bushes. The regional Fed indices all point downward but are failing to attract market attention.

This is having your cake and eating it, too. So far the ECB has raised rates from -0.50% to +0.75%. The FT reports “Eurozone government bond prices have fallen sharply in recent days on expectations that the ECB could raise its deposit rate to as high as 3 percent by next year. But bond prices rallied on Wednesday, with the rate-sensitive German 2-year bond yield dropping below 2 percent as Lagarde spoke.

“The ECB defines price stability as inflation of 2 percent, but price growth in the euro area is expected to rise to a new record of 9.7 percent when September consumer price data is released on Friday.”

As for that BoE intervention in the bond market, the BoE statement shows an interesting choice of vocabulary: “"On 28 September, the Bank of England’s Financial Policy Committee noted the risks to UK financial stability from dysfunction in the gilt market. It recommended that action be taken, and welcomed the Bank’s plans for temporary and targeted purchases in the gilt market on financial stability grounds at an urgent pace…. The Bank will carry out temporary purchases of long-dated UK government bonds from 28 September. The purpose of these purchases will be to restore orderly market conditions. The purchases will be carried out on whatever scale is necessary to effect this outcome.”

Here are the notable words: “dysfunction” and “financial stability” and “temporary and targeted.” But most of all “whatever scale is necessary,” the British version of Draghi’s “whatever it takes.” Notice that the BoE doesn’t name what caused the dysfunction and disorder, generally thought to be the giant unfunded budget deficit promised by PM Truss and enhanced over the weekend by the Chancellor. Again, this is what happens in emerging markets, not rich, advanced economies where deficits lead to higher yields and higher yields lead to higher currency values–the lesson from Reaganomics. In a very direct way, the bond market response is an insult to the government.

Bloomberg notes that everybody and his brother felt entitled to comment. “…. the International Monetary Fund called the unfunded tax cuts excessive and in need of revision, while Moody’s Investors Service warned that it risks doing lasting damage to the nation’s debt affordability. Mohamed El-Erian, chief economic adviser at Allianz SE, said it means the Bank of England will need to raise interest rates by at least 100 basis points at its next meeting on Nov. 3.”

No surprise the BoE used the equivalent of “whatever it takes,” Mr. Draghi’s phrase when Spain met a budget/deficit crisis in 2012 and almost took ECB support, but backed off at the last minute when Draghi insisted the bank be able to see the books and adjust them. Remember that at the time, Draghi was referring to saving the euro, not Spain’s fiscal rectitude. . It will remind you why Draghi was so universally revered.

This is remarkable. We can see disarray in the Kshitij chart of the bond spread together with the currency pair. . It makes no sense! So, something has got to give. The market is pretty sure it will be the pound and a return to the recent low of 1.0350 is practically a dead cert. 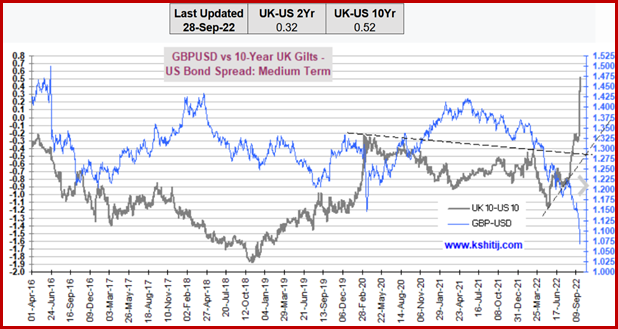 Meanwhile, the too-strong dollar remains too strong and we worry about pushbacks.

Earnings: what does that word mean? Already booked and in the bank, or expected for an upcoming period? Nowadays it means “expected/estimated,” not real, a permanent grievance for sticklers. Anyway, a Reader sent us this tidbit: “8 out of 10 of the largest public companies (AAPL, MSFT, AMZN, TSLA, BRK.A, UNH, V, JNJ) trade at a lower *earnings* yield than the real cash yield of a 2Yr Treasury, which today stands at 4.2%.”

Years ago the P/E of equities was compared to bond yields but that comparison died out over 20 years ago, a pity. Perhaps it’s coming back, along with another oldie-but-goodie, the “real” rate of return. The implication is that companies will have to raise dividends to compete with bonds, and by some premium for the extra risk. Savers and family trusts will be happy. It’s also a reason to buy-the-dip. Stay tuned.