Gold started the new week in a calm manner and consolidated the previous week’s gains on Monday. With the trading volumes returning to normal levels following the Labor Day holiday in the US, the XAU/USD pair turned south and lost 1.6% on Tuesday as the risk-averse market environment helped the greenback find demand. Although the pair was able to erase a small portion of its losses on Thursday, it closed the week below $1,800 and lost nearly 2%.

The data from China revealed on Tuesday that Exports rose by 25.6% on a yearly basis in August, compared to the market expectation of 17.1%. Additionally, Eurostat reported that the Gross Domestic Product (GDP) in the euro area expanded by 2.2% on a quarterly basis in the second quarter, bettering analysts' estimate for a contraction of 0.6%. Despite these upbeat data releases, however, the market mood soured and major global equity indexes posted losses. In turn, the US Dollar Index (DXY) rose 0.35% and forced XAU/USD to edge lower.

On Wednesday, the US Bureau of Labor Statistics announced that JOLT Job Openings reached a new series-high of 10.9 million in July. On a negative note, the IBD/TIPP Economic Optimism Index fell to its lowest level of 2021 at 48.5 in September from 53.6 in August. These figures failed to impact the market sentiment and the USD preserved its strength against its major rivals.

Following its September policy meeting, the European Central Bank (ECB) noted in its statement that favourable financing conditions could be maintained with a moderately lower pace of Pandemic Emergency Purchase Program (PEPP) purchases. The initial market reaction to this seemingly hawkish forward guidance helped the EUR/USD pair push higher and the modest selling pressure surrounding the greenback paved the way for a rebound in XAU/USD. Nevertheless, ECB President Christine Lagarde clarified that this decision was an adjustment rather than tapering and capped EUR/USD's upside. Meanwhile, the US Department of Labor's weekly publication showed that the Initial Jobless Claims fell to the lowest level since the beginning of the pandemic at 310,000.

Ahead of the weekend, investors largely ignored the data from the US that revealed the Producer Price Index (PPI) for final demand rose to 8.3% on a yearly basis in August from 7.8% in July. After starting the last day of the week in the positive territory, Wall Street's main indexes turned south and the DXY staged a rebound, causing XAU/USD to close near the lower limit of its weekly range.

The first high-impact data release of the week will be Tuesday's Consumer Price Index (CPI) report from the US. Cleveland Federal Reserve Bank President Loretta Mester said on Friday that she sees upside risks to the inflation forecast and voiced her support for tapering to start before the end of the year. On a similar note, Atlanta Federal Reserve President Raphael Bostic noted that it would be appropriate to taper sometime this year.

A stronger-than-expected CPI reading could cause investors to start pricing in a reduction in the Fed's asset purchases and provide a boost to the USD and vice versa.

On Wednesday, Chinese Industrial Production and Retail Sales figures will be looked upon for fresh impetus. However, the muted market reaction to the latest trade data from China suggests that the impact of these readings on market sentiment is likely to remain limited.

Retail Sales and Philadelphia Fed Manufacturing Survey will be featured in the US economic docket on Thursday ahead of the University of Michigan's preliminary Consumer Sentiment Index data on Friday. 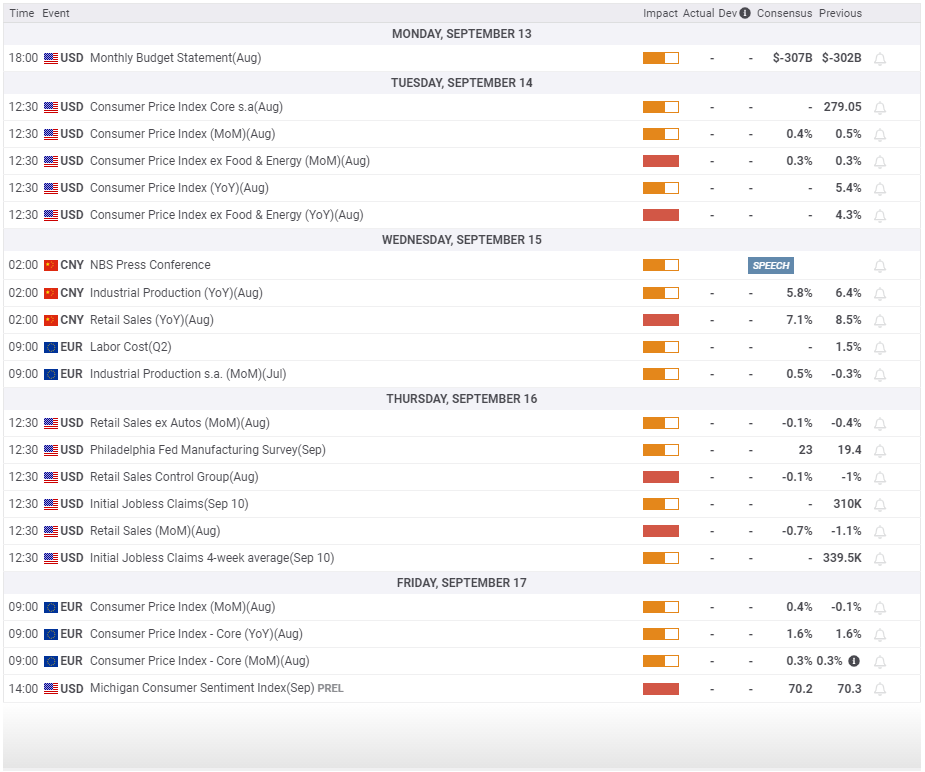 Following the decline witnessed in the first half of the week, gold's near-term technical outlook seems to have turned neutral with a bearish bias. In addition to the fact that XAU/USD close below both the 100-day and the 200-day SMAs for the fourth straight day on Friday, the Relative Strength Index (RSI) indicator on the daily chart retreated below 50.

Despite gold's poor performance this week, FXStreet Forecast Poll shows that experts see a rebound next week with an average target of $1,813. Both the monthly and the quarterly outlooks show that the bullish bias is expected to remain intact. 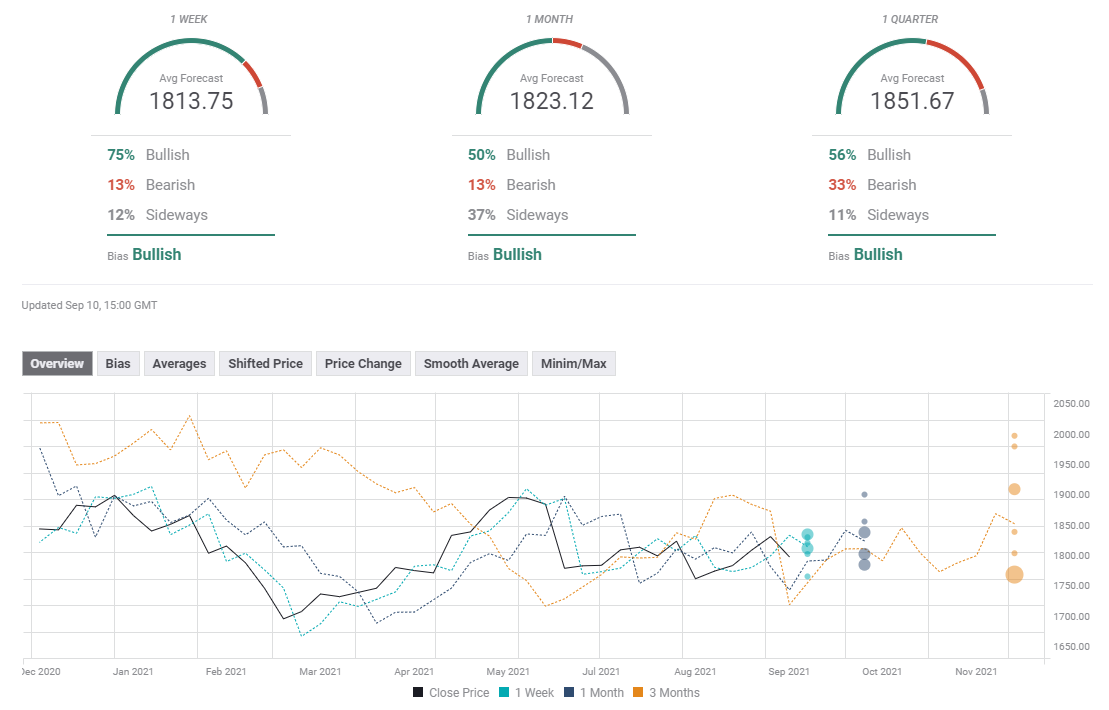