After closing the previous week in the negative territory, gold stayed on the back foot on Monday and dropped below $1,800. However, the subdued market action ahead of key macroeconomic events allowed the precious metal to stay in a consolidation phase on Tuesday. With the greenback coming under heavy selling pressure in the second half of the week, the XAU/USD pair managed to stage an impressive rebound. Following a rally to a fresh two-week high of $1,832 on Thursday, the pair retraced a portion of its upside but registered weekly gains by settling above $1,810.

The cautious market mood at the start of the week helped the USD stay resilient against its rivals but gold also attracted some demand as a safe-haven and XAU/USD struggled to make a decisive move in either direction.

On Wednesday, the US Federal Reserve announced that it left the benchmark interest rate, the target range for federal funds, unchanged at 0%-0.25% as widely expected. Moreover, the central bank noted that it will continue to buy at least $80 billion/month of Treasuries and $40 billion/month of mortgage-backed securities until substantial further progress is made on maximum employment and price stability goals. In its policy statement, the FOMC reiterated that it will use the full range of its tools to support the economic recovery.

During the press conference following the monetary policy decisions, FOMC Chairman Jerome Powell acknowledged that policymakers started debating how and when they can adjust asset purchases. Powell, however, refrained from suggesting that they could taper before the end of the year and investors assessed his tone as relatively dovish. In the meantime, Powell repeated that higher-than-expected inflation is caused by temporary factors. The US Dollar Index, which tracks the greenback’s performance against a basket of six major currencies, turned south following the FOMC event and dropped to its lowest level in a month below 92.00 on Friday, reflecting the broad-based USD weakness.

On Thursday, disappointing macroeconomic data releases from the US made it difficult for the USD to erase its losses and helped XAU/USD preserve its bullish momentum. The US Bureau of Economic Analysis (BEA) reported that the real Gross Domestic Product expanded at an annualized rate of 6.5% in the second quarter. This reading missed the market expectation of 8.5%. Additionally, the US Department of Labor announced that there were 400,000 initial claims for unemployment benefits in the week ending July 24, compared to analysts’ estimate of 380,000.

Finally, the BEA announced on Friday that the Core Personal Consumption Expenditures (PCE) Price Index edged higher to 3.5% on a yearly basis in June. This print came in lower than the market expectation of 3.7% and failed to trigger a noticeable market reaction. Nevertheless, falling US stocks and some hawkish Fed commentary provided a boost to the USD ahead of the weekend and XAU/USD reversed its direction. St. Louis Fed President James Bullard argued that the Fed should start reducing asset purchases this fall and added that he expects to see the initial rate hike in the last quarter of 2022. Furthermore, profit-taking on the last trading day of the month could also have played a role in gold’s weakness on Friday.

On Monday, the ISM will release the Manufacturing PMI report for July. Although the business activity in the manufacturing sector is expected to continue to expand at a robust pace, the Prices Paid Index component of the survey will be watched closely by market participants and a reading above 90 could revive inflation concerns and help the USD gather strength. The same goes for the ISM’s Services PMI report, which will be published on Wednesday.

On Thursday, the weekly Initial Jobless Claims will be the only data featured in the US economic docket. In the meantime, the Bank of England will announce its monetary policy decisions. It’s difficult to say if this event can have a direct impact on gold’s valuation but a sharp movement in the GBP/USD pair could affect the USD demand.

On Friday, the US Bureau of Labor Statistics will publish the Nonfarm Payrolls data for July. FOMC Chairman Jerome Powell said that they have some ground to cover on the labor market side with regards to “substantial further progress.” A stronger-than-expected reading could cause investors to price a hawkish policy outlook and lift the USD against its peers and vice versa. 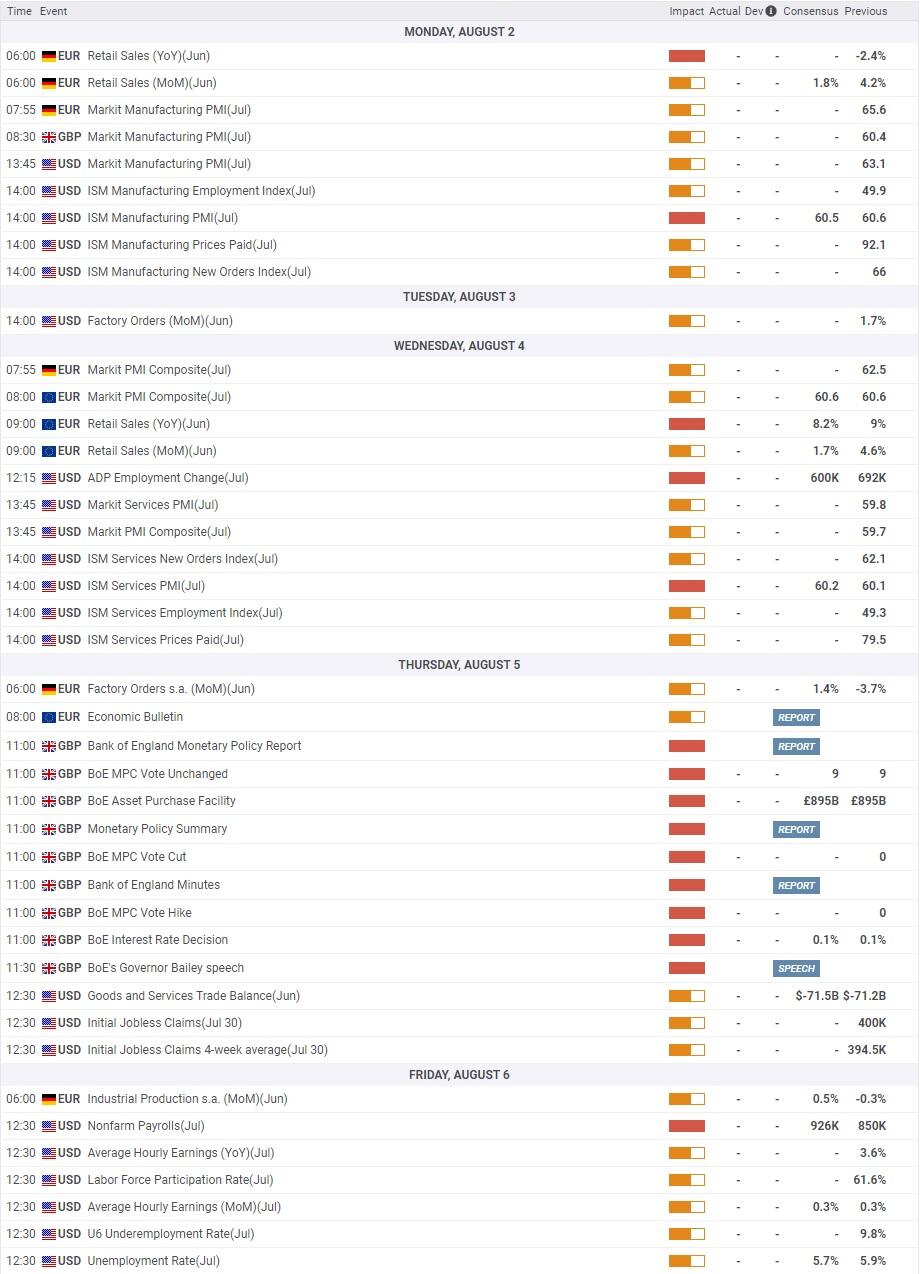 Following Friday’s decline, the Relative Strength Index (RSI) indicator on the daily chart retreated to 50, pointing to a loss of bullish momentum. Additionally, gold closed the week below the critical 200-day SMA after rising above that level on Thursday, suggesting that buyers are struggling to remain in control. In the near term, the pair seems to be poised to move sideways between the 100-day SMA and 200-day SMA but the market reaction to Friday’s US jobs report could cause it to break out of that range.

Gold’s near-term outlook remains bullish according to the FXStreet Forecast Poll with an average target of $1,832 on the one-week view. Similarly, the majority of experts see gold trading above its current level by the end of August. 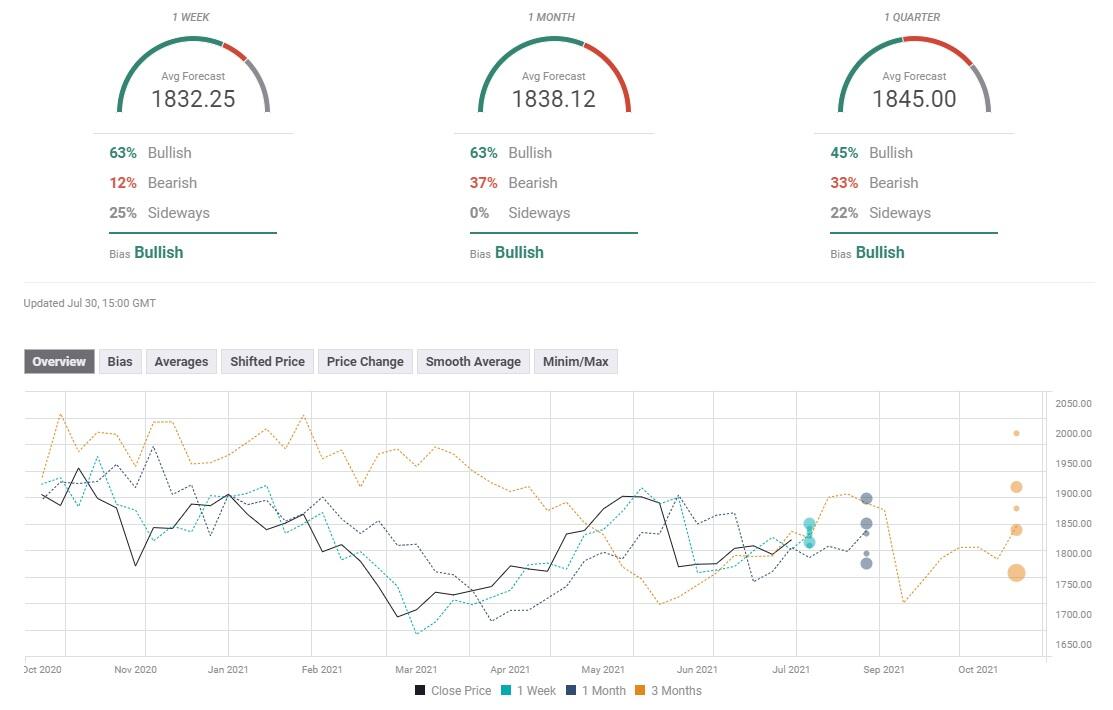