Gold started the week on the back foot and fell to its lowest level in nearly a month below $1,730 on Monday before staging a rebound. Although XAU/USD managed to advance beyond $1,760 on Thursday, it struggled to gather bullish momentum and retreated below $1,740 ahead of the weekend. With Fed policymakers reiterating the significance of the August inflation and employment data ahead of the September meeting, gold could struggle to stage a rebound ahead of Friday's Nonfarm Payrolls (NFP) report.

The dollar rally that was triggered by hawkish Fed commentary in the previous week carried over to Monday and the US Dollar Index climbed above 109.00. Meanwhile, the People's Bank of China’s (PBoC) decision to lower the one-year loan prime rate (LPR) and the five-year LPR by 5 basis points and 15 points, respectively, reminded investors of the worsening Chinese economic outlook and put additional weight on gold’s shoulders.

On Tuesday, the data published by S&P Global revealed that the business activity in the US manufacturing sector continued to contract in early August with the Composite PMI dropping to 45 from 47.7 in July. This reading came in worse than the market expectation of 47.5 and caused the greenback to lose appeal. Commenting on the findings of the survey, "one area of reprieve for firms came in the form of a further softening in inflationary pressures," Siân Jones, Senior Economist at S&P Global Market Intelligence said. "Input prices and output charges rose at the slowest rates for a year-and-a-half amid reports that some key component costs had fallen." Gold capitalized on the selling pressure surrounding the dollar and gained more than 0.5% on Tuesday.

In the second half of the week, the US Bureau of Economic Analysis (BEA) announced that the US economy contracted at an annualized rate of 0.6% in the second quarter. This reading came in higher than the flash estimate of -0.9% and surpassed the market expectation for a contraction of 0.8%. Meanwhile, Philadelphia Fed President Patrick Harker said on Thursday that he wants to see the next inflation reading before deciding on the size of the September rate hike but added that a 50 basis points (bps) increase would still be a substantial move. The dollar struggled to preserve its strength after these comments and XAU/USD closed the third straight day in positive territory. Furthermore, the benchmark 10-year US Treasury bond yield lost more than 2% on Thursday, providing an additional boost to gold.

On Friday, the monthly report published by the BEA revealed that inflation in the US, as measured by the Personal Consumption Expenditures (PCE) Price Index, declined to 6.3% in July from 6.8% in June. Combined with this soft inflation data, dovish comments from Atlanta Fed President Raphael Bostic triggered a dollar selloff. Bostic noted that he was leaning toward a 50 bps rate hike in September after seeing the latest PCE inflation figures. FOMC Chairman Jerome Powell, however, helped the dollar to rise strongly as he reiterated his hawkish stance by saying that restoring the price stability will likely require maintaining a restrictive policy stance for 'some time.' Regarding the September policy move, Powell said that the decision will be based on the totality of data since the July meeting. After all the dust settled, XAU/USD turned south and dropped below $1,740, erasing all of its weekly gains in the process.

There won’t be any high-impact data releases on Monday and gold’s trading action is likely to remain muted. On Tuesday, the Conference Board’s Consumer Confidence Index for August will be looked upon for fresh impetus. The softening inflation in July may have helped the consumer sentiment improve in August and such an outcome could help the dollar outperform its rivals.

The US economic docket will feature the ADP’s new employment report on Wednesday. Since this will be the first-ever release, it is difficult to figure out a potential market reaction. During the European session, Eurostat will release Harmonised Index of Consumer Prices (HICP) data for August. Markets expect the annual HICP to edge lower to 8.6% in August from 8.9% in July. A higher-than-expected reading could trigger a euro rally and cause the dollar to lose demand. Although XAU/USD could gain traction in that scenario, it could find it difficult to climb steadily if global yields push higher.

On Thursday, the ISM Manufacturing PMI from the US will be looked upon for fresh impetus. Experts forecast the headline PMI to stay largely unchanged at 52.6 in August and expect the Prices Paid Index to climb to 75 from 60 in July. In case the inflation component confirms that price pressures continued to ease in August, gold could turn north and vice versa.

Finally, investors will pay close attention to the US Bureau of Labor Statistics’ August jobs report. The Fed rejects the idea of a deep recession in the US amid tight labor market conditions. The September rate decision depends heavily on the labor market developments and disappointing growth in Nonfarm Payrolls could trigger a deep dollar sell-off by ramping up the odds of a 50 basis points rate hike in September. On the other hand, another above-500K print could confirm a further oversized rate increase and provide a boost to the dollar. 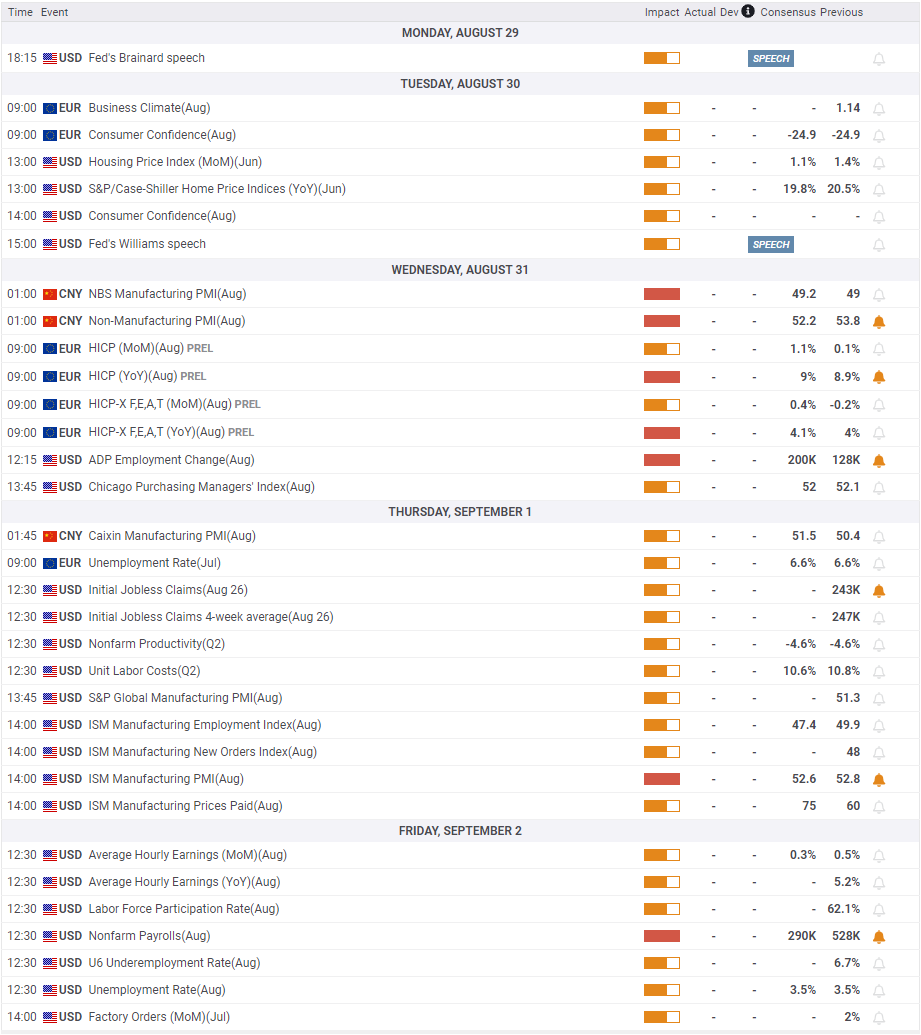 Following Friday's action, the Relative Strength Index (RSI) indicator on the daily chart dropped below 50, pointing to a bearish tilt in the near-term technical outlook. Additionally, gold failed to rise above the 20-day SMA after having tested level on Thursday.

On the downside, $1,720 (static level) aligns as the first support ahead of $1,700 (psychological level, the end-point of the latest downtrend). A daily close below the latter could open the door for an extended slide toward $1,680 (July 21 low).

The FXStreet Forecast Poll shows that a majority of polled experts expect gold to stage a rebound next week. The one-month outlook, however, paints a mixed picture with half of the experts seeing the price holding at around the $1,730-$1,735 area. 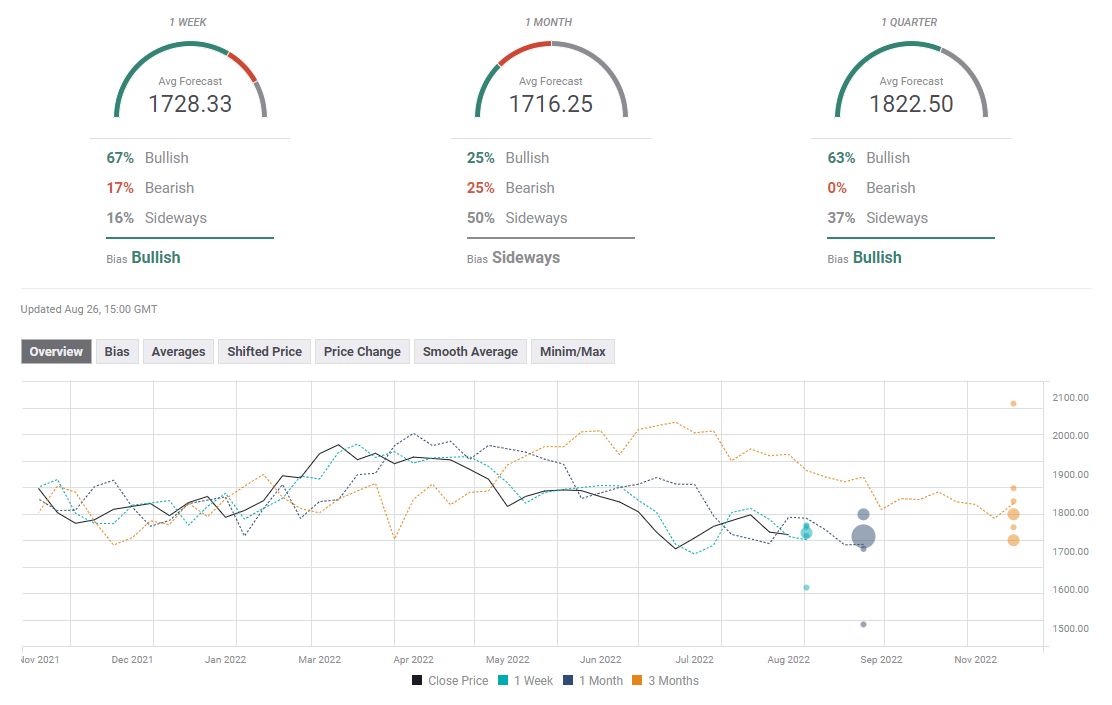