This week, the 2019 edition of the In Gold We Trust report was released. The authors revealed which direction of the next gold price move they favor heavily. Let’s look at their premises and conclusion – how do they square with our analytical take?

On Tuesday, Incrementum AG published its annual “In Gold We Trust” report. The authors did a lot of work – the full version has 339 pages! But don’t worry, for those who do not have time to read such a tome, there is a helpful “compact” version (think executive summary) – only 96 pages short! If you think it’s still too long, great – we have done the homework of distilling the essence for you.

The current edition of the report focuses on trust, which is the basic value of any interpersonal relationship and the foundation of social order in general. The problem is that we are observing the erosion of trust in many areas. Think about the politics – only one person in ten still has confidence in the government. The by-product is high polarization of the society as we observe in the Western world. After the Great Recession, few people trust the banks. Or ask the supporters of Bitcoin. Similarly, few people trust mass media – let’s face it: reporters are agenda-driven and biased, one or the other. And, what is really disturbing, trust in science is also declining – just ask the flat earthers how was their trip to the edge of the earth.

Fair enough, but what does it all have to do with gold? Well, a lot! After all, gold is ‘clotted’ trust or, clotted mistrust against all other promises of value. Indeed, the recent acceleration in central banks’ purchases of gold and the repatriation of their bullion indicate growing distrust in the current monetary system based on fiat currencies in general, and the greenback in particular.

However, the crumbling confidence in the U.S.-centric world order has not been yet reflected in a weak US dollar or a rally in gold prices. Why? According to the authors, there are two reasons. First, Trump’s triumph in those fateful 2016 elections changed the mood of many investors. The stock market boomed. Second, the apparent strength of the U.S. economy implies that people still highly trust the Fed and other central banks.

But what if the next crisis hits the economy? What if the omnipotence of the central banks or the credit-driven record upswing are called into question by the markets? What if the recent decline in the household’s net worth is a harbinger of the next recession (see the chart below)? 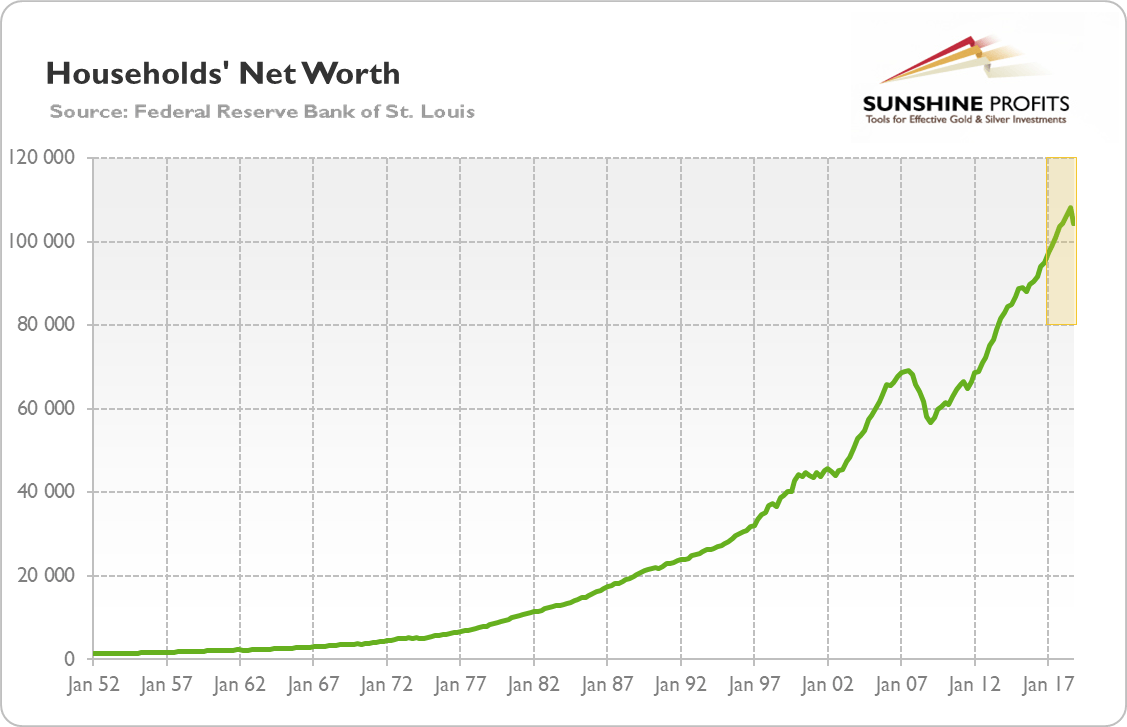 The trust in the US economy and its currency will crumble then, while the gold will shine. After all,

trust looks to the future, forms itself in the present, and feeds itself from the past. As monetary asset, gold can look back on a successful five-thousand-year history in which it was able to maintain its purchasing power over long periods of time and never became worthless. Gold is the universal reserve asset to which central banks, investors, and private individuals from every corner of the world and of every religion and every class return again and again.

So far, so good. We totally agree. The only question is timing. And this is our only issue with the report: the authors are perma-bullish and they believe that gold is already in the early stages of a new bull market which could soon pick up momentum. They believe that the social climate and the economic dynamics will force the Fed to initiate a turnaround in monetary policy before the next presidential elections in November 2020. That reversal could then lift the gold price above the psychologically important resistance zone of $1,360-1,380, they wrote. If this mark is breached, a gold price of over $1,800 seems within reach in the medium term, the report authors further believe.

However, although we agree that the macroeconomic background – economic slowdown, a more dovish monetary policy and waning fiscal stimulus – should be supportive for the gold prices, we do not yet see particularly strong signs of any oncoming recession. Therefore we opine that gold bulls could have to wait a little longer for gold to shine.

The recent edition of the In Gold We Trust report is a very lengthy, but interesting publication. However, the main problem with the authors is that they seem to be goldbugs. As a reminder, they have been writing about the early stages of the bull market in gold for a quite few years in a row already. In 2017, the authors called for gold to reach a price target of $2,300 by June 2018. Big miss. Although the authors are right with regard to many current threats to the global economy, it does not mean that the risks have to materialize immediately. Therefore, it is worth reading the report, but investors should take it with a pinch of salt.

When the trust in the Fed and the US dollar fades, gold will shine. When the next crisis hits, the central banks will have to cut interest rates, perhaps even below zero, while the governments would loosen their fiscal policies even further. However, gold still faces significant headwinds in the interim, such as low inflation, low volatility, elevated stock prices, high trust in the financial system, solid labor market and steady economic growth. We also trust in gold, but it’s important to not expect too much and too soon from it. Gold glimmers beautifully, but how is it supposed to shine in a bright room?