According to popular opinion, gold does not bear interest. Although that is true for retail investors, gold lending is an integral part of the gold wholesale market. What is gold leasing and how does it affect gold prices?

A lease is a contract where an asset is rent to someone else. As odd as it sounds, gold is also leased. Why? Well, on the one hand, some entities own gold they need to put to work, e.g. the bullion banks that hold a metal as a debt to their customers, so they can lease it out to earn money. On the other hand, there are companies in the gold industry who, for some reasons, prefer to borrow the metal instead of buying it outright. For example, there might be a gold mining company which expects to have one thousand ounces of gold from its production. However, the metal will be ready to sell in the market not earlier than before one month, since it must be refined etc. The company, however, still needs to pay its employees and cover other expenses on an ongoing basis. Therefore, it might borrow gold for one month from the bullion bank, sell it for cash and pay its bills, and then give the produced and refined gold back to the bank. Since the gold lease rate (GLR), i.e. the interest rate for borrowing gold, is usually lower than the U.S. dollar interest rates, it makes sense to borrow gold rather than greenbacks (at least for companies who can easily sell gold or use it in their production processes).

There is a lot of misunderstanding about the gold leasing. For example, in past decades the most prominent gold lenders have been central banks (however, these leases have recently been unwound to a great extent), so some analysts argue that central banks leased their bullion to manipulate the gold prices. However, the cause and effect actually work the other way around. When the price of gold declines, the demand for borrowing gold increases. When gold is in a bear market, traders can borrow it, sell at the moment, invest the cash elsewhere, and then repay the lease with much cheaper gold in the future (however, there is some are some negative consequences, as gold hedging exerts additional downward pressure on gold prices). Therefore, it should not surprise us that in the 1980s and 1990s, when gold was in that longterm bear market and many investors believed that this trend would persist indefinitely, the gold leasing market was active, and the gold lease rates were relatively high (indicating a more intense borrowing demand), as one can see in the chart below. 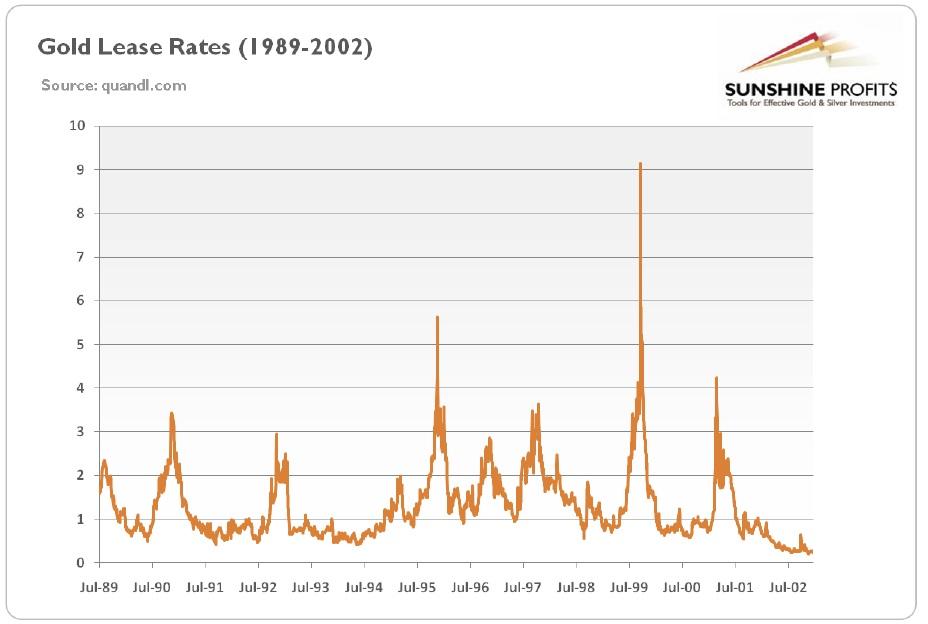 It is true that the ‘gold carry trade‘ (i.e., the strategy of borrowing gold and investing in other assets at a higher rate) was possible thanks to central banks willing to lend large amounts of gold at low interest rates. However, gold cannot be lent unless there are willing borrowers. In the 1990s, when the gold prices were decreasing, the borrowing of gold or shorting gold (hedging forward production) worked beautifully. However, when the bull market in gold began, borrowing gold became unprofitable. In the 2000s, the global mining hedge book fell dramatically as miners looked to increase their exposure to rising gold prices, and reduced their hedging. As the chart below shows, that dehedging reduced the demand for gold borrowing, and, consequently, the lease rates fell close to zero (increasing for a short time only after the Lehman Brother’s bankruptcy). 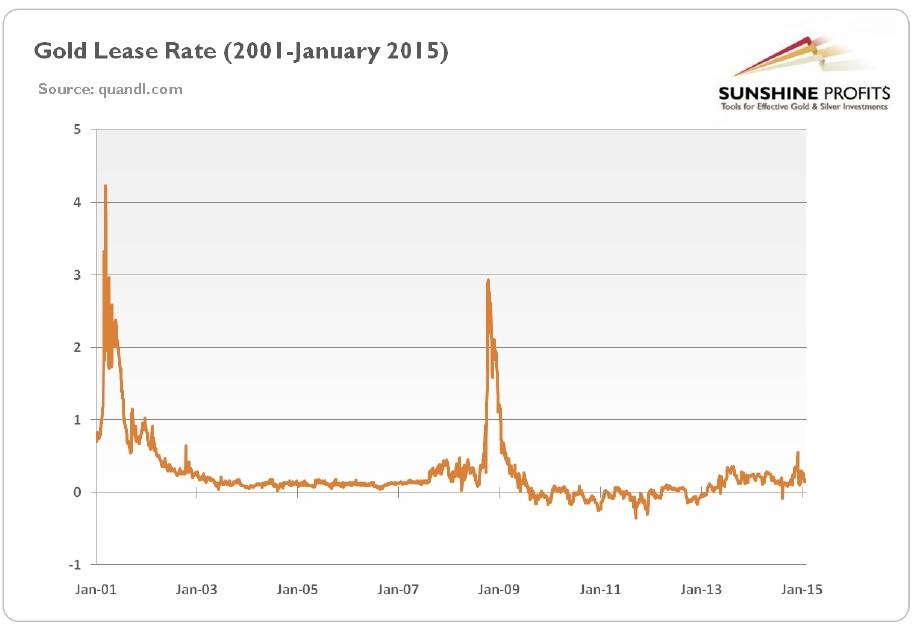 This chart shows two more interesting things. First, in the current environment of zero interest rates and a more bullish gold market, the gold lease rates (GLR) are likely to remain low. Second, the GLR were negative most of the time in 20092012, which seems absurd, since it would mean that bullion banks were paying to lease gold to somebody. The truth behind the negative GLR is the fact that back then LIBOR was a terrible indicator of market interest rates (in reality, investors borrowing gold and selling it in the spot market could reinvest the proceeds at higher rates than LIBOR). Investors should be aware that the GLR is derived as a difference between the LIBOR and the Gold Forward Offered Rate (more on that later in the report), and not the actual rate that is paid to borrow gold.

To sum up, gold may be leased, or lent and borrowed, just like any other currency. Some analysts argue that gold leasing artificially suppresses the gold prices. However, in fact the changes in the price of gold drive the gold leasing market, not the other way around. In the 1990s, the gold carry trade was very profitable, as the gold prices were decreasing (only then borrowers could repay the loan with gold that had dropped in price). And the gold mining industry expected the everfalling prices, so it was shorting gold heavily. However, as the price of gold started to rise (partially due to the decline in the U.S. real interest rates) in the 2000s, borrowing gold seemed an absurd strategy, leaving central banks with no one to lend to. Therefore, leasing gold (including central banks’ operations) does not drive the gold prices, the opposite is true.