LIBOR (London Interbank Offered Rate) has served as a key benchmark interest rate for the past few decades. Although only large banks borrow at the actual LIBOR rate, it is nevertheless familiar to millions of businesses and individuals because their borrowing costs are often tied to LIBOR (typically plus some spread). But, the credibility of LIBOR was undermined, at least in part, by a price-fixing scandal a few years ago, and LIBOR will be phased out as a benchmark borrowing rate, perhaps as early as the beginning of 2022.

Regulators and market participants around the world are in the process of establishing new benchmark interest rates to replace LIBOR. In the United States, this new benchmark rate has been determined and is known as the Secured Overnight Financing Rate (SOFR). Starting sometime in the not-too-distant future, the borrowing costs of non-financial businesses and individuals will likely be tied to SOFR rather than LIBOR.

As shown in Figure 1, LIBOR and SOFR are highly correlated.1 But there are some important differences between the two rates. First, SOFR is based off of actual transaction data, while LIBOR is not. Specifically, the LIBOR setting each day is based on a survey of only 16 global banks. In contrast, SOFR is determined on a continuous basis by the interactions of numerous financial institutions in the Treasury security repo market.2 We will discuss repurchase agreements (i.e., repos) in more detail subsequently. 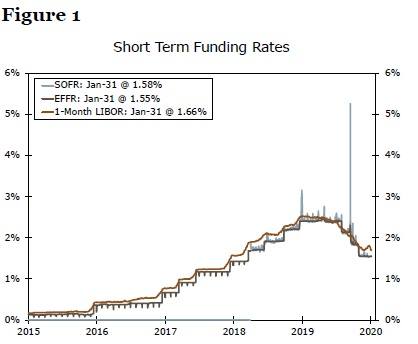 As its name implies, SOFR is a secured rate. That is, the transactions upon which SOFR is based involve pledging U.S. Treasury securities as collateral in order to borrow cash from other financial institutions. In contrast, LIBOR represents the average rate at which select large banks could fund themselves in the wholesale, unsecured funding market. Another difference is that, as its name implies, SOFR is an overnight rate, whereas LIBOR traditionally has a term component to it (1-month LIBOR, 3-month LIBOR, etc.). Although these technical differences exist between LIBOR and SOFR, the two rates are still highly correlated and both benchmarks have a high degree of co-movement with the effective fed funds rate (EFFR). Consequently, SOFR and LIBOR are similar in that both rates are determined largely by the monetary policy stance of the Federal Reserve.

In that regard, we look for the Federal Open Market Committee (FOMC) to keep its target range for the fed funds rate unchanged through at least the end of 2021 (Figure 2).3 Although we believe that the expansion that has been underway in the U.S. economy since mid-2009 will continue, the real GDP growth rates that we forecast for 2020 (2.1%) and 2021 (2.3%) are not strong enough to induce Fed tightening, in our view. Furthermore, we forecast that rates of consumer price inflation will generally remain benign. With inflation not moving meaningfully above the FOMC's target of 2%, we believe that most committee members will not feel compelled to tighten policy. In short, SOFR should generally remain near its current rate of roughly 1.60% for the foreseeable future. 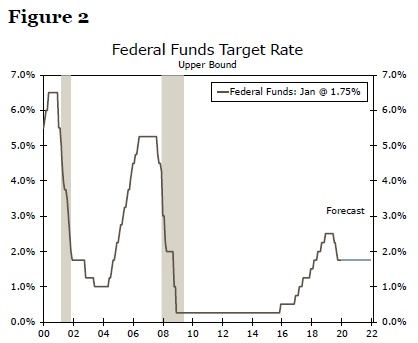 But as Figure 1 makes apparent, the correlation between LIBOR and SOFR is high but imperfect. Some of the variance between the two rates can simply be explained by the difference in their terms, but there are times when the two rates have diverged significantly, as happened for a few days in September 2019. SOFR spiked nearly 300 bps on September 17, whereas 1-month LIBOR rose just two bps. In short, there are factors other than the monetary policy of the Federal Reserve that can influence SOFR. What are some of these factors, and are there any reasons to expect them to change in the foreseeable future?

Since SOFR is based off of repo transactions, it is first important to understand certain dynamics in the repo market. A repurchase agreement is, in short, a way for an institution to borrow or lend cash for a specific period of time, using financial securities as collateral. When it comes to SOFR, the relevant repo transactions specifically focus on borrowing cash overnight collateralized by Treasury securities. Thus, the supply and demand for both loanable cash and Treasury securities can drive movements in Treasury repo markets and thus SOFR.

More than 5,500 depository institutions maintain accounts at the Federal Reserve Banks, where those institution hold their cash reserves. These reserves serve as a key source of loanable cash in the Treasury repo market. As shown in Figure 3, the reserves that the banking system holds at the Federal Reserve mushroomed between late 2008 and 2014 due to the quantitative easing (QE) that the Fed undertook during those years.4 Prior to the financial crisis, banks were reluctant to hold excess reserves because those reserve holdings did not earn interest. But legislation that Congress enacted during the Great Recession gave the Federal Reserve the authority to pay interest on reserves. Furthermore, reserves are an important component of the high quality liquid assets (HQLA) that banks must now hold for regulatory requirements. Consequently, banks willingly hold excess reserves today in sizable quantities. 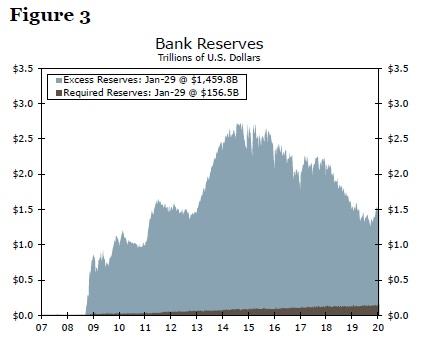 But the Federal Reserve began unwinding QE in October 2017 by allowing the Treasury securities and MBS that it owns to slowly run off its balance sheet. This shrinkage on the asset side of the Fed's balance sheet must be reflected in a commensurate decline in the Fed's liabilities. Reserves held at the Fed, which are an asset of the banking system but a liability of the central bank, receded by more than 50% over the past few years (Figure 3), reaching a bottom in September 2019.

On the Treasury collateral side of the equation, the primary driver of more Treasury securities outstanding has been the increase in the federal budget deficit. As recently as FY 2015, the budget deficit was just $439 billion. FY 2019, which ended on September 30, saw a deficit of $984 billion, a more than 100% increase in just four years. A secondary driver of greater Treasury supply has been the shrinking of the Fed's balance sheet from October 2017 through July 2019. As was discussed earlier, when the Federal Reserve's balance sheet was declining in size, the drop in bank reserves held at the Fed (a liability on the Fed's balance sheet) was matched in part by a decline in Fed holdings of Treasuries (an asset on the Fed's balance sheet).

Putting these two factors together, privately-held, marketable Treasuries outstanding have risen roughly $2.4 trillion over the past two years. Figure 4 illustrates how the ratio of Treasury securities outstanding to bank reserves began to climb early in 2018, peaking in September 2019 and declining subsequently as the Fed has bought Treasury bills/added reserves to the financial system. 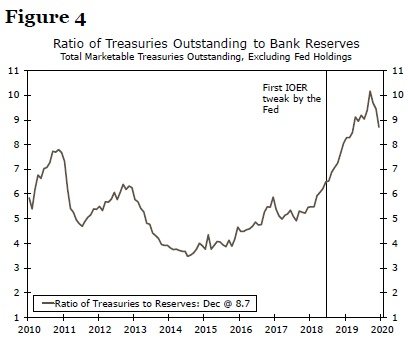 In addition to these more structural factors, the supply and demand for cash can fluctuate significantly on a day-to-day basis. Banks are often less willing to lend in the repo market around month/quarter-end for regulatory reasons, and this can push repo rates higher. For example, SOFR shot up to 3.15% on January 2, 2019 from 2.46% on December 28, 2018 but then it quickly returned to its previous level as the year got fully underway (see Figure 1 on front page). Similarly, the increase that occurred in mid-September 2019, when SOFR spiked to more than 5%, happened around a quarterly deadline for corporate tax payments. As we explained in two reports at that time, there are often multiple technical factors that contribute to outsized increases in SOFR during episodes such as these. Regardless of the specific drivers in any one instance, SOFR is more sensitive than LIBOR to changes in the mix of Treasury security collateral and cash, as well as some liquidity and leverage regulations.

As noted previously, there tends to be more volatility in SOFR than in LIBOR. So does this mean that individuals and businesses who borrow at a SOFR-determined rate will experience more volatility in in their borrowing costs than they do at present under their LIBOR-determined rates? Probably not. One proposed solution to this problem is to have households and businesses borrow at a term SOFR rate that is determined in arrears. For example, a one-month SOFR rate would be the moving average of the daily SOFR rate over the past month. Although SOFR can be volatile on a daily basis, its one-month moving average tends to be more or less as smooth as 1-month LIBOR (Figure 5). That said, the relationship is not perfect, and it is important to bear in mind that a one-month moving average of SOFR is inherently backward-looking, whereas 1-month LIBOR is an inherently forward-looking rate. 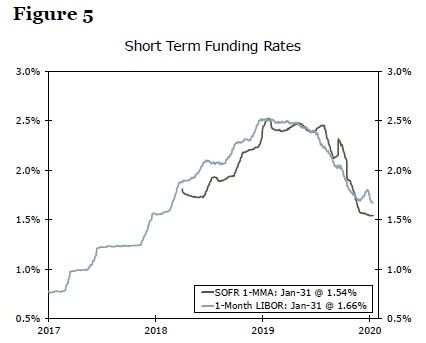 LIBOR will be replaced by SOFR as a benchmark reference rate as early as the beginning of 2022. Although there are some technical differences between the two rates, they both are determined largely by the policy stance of the Federal Reserve. Because we forecast that the FOMC will be on hold through 2021, we expect that SOFR will remain largely unchanged over that period at its current level of roughly 1.60%.

That said, SOFR can encounter short periods of volatility such as it experienced at year-end 2018 and in September 2019. Fed policymakers hope that their open market repo operations and Treasury bill purchases exert a dampening effect on SOFR volatility. But, it would be premature to state that periods of SOFR volatility have been eliminated entirely. We plan to discuss some options that the Fed may have to address volatility in money market rates in our next SOFR piece, which we intend to publish in Q2-2020.

GBP/USD is cheering a broadly weaker US Dollar amid firmer sentiment while holding higher ground near 1.2000 in early European trading hours. China's reopening optimism spurs risk flows and boosts the risk-sensitive GBP ahead of Bailey's testimony and Fedspeak.

XRP price shows that it is taking its sweet time to overcome and sustain above a crucial resistance level. If successful, it could catalyze a quick run-up. However, the lack of volatility in crypto markets has made it impossible for the remittance token to do this by itself.

The prediction of recession is gaining momentum

Today brings the Dallas Fed survey and a slew of speeches by Fed officials, but the big story will be the November nonfarm payrolls on Friday, currently forecast at a lesser 200,000 from 261,000 in October (but the unemployment rate the same 3.7%).