The tyranny of Treasuries – US bonds have been dominant in determining the direction of markets, overshadowing stimulus, the UK's reopening and other events. The focus remains on yields, and especially what the Fed does with them. The Bank of England will also vie for attention.

This week in GBP/USD: Yield-watch

All yield – every ebb and flow in returns on Treasuries and especially the global ten-year benchmark had an outsized impact on the dollar and GBP/USD.

The US conducted three bond auctions and all were calmer than some had feared. Robust demand for US debt helped temporarily push returns lower, weighing on the dollar. However, expectations for strong growth in the world's largest economy meant that the lid did not stay there for long.

Stimulus: President Joe Biden signed into law a modified – yet not materially altered – version of his $1.9 trillion coronavirus relief package. The Senate's approval over the weekend somewhat strengthened the narrative of the "reflation trade" which supports higher returns on debt and a stronger greenback. At the time of writing, stimulus checks are in the mail.

Biden also pledged to make every American above 16 eligible for vaccines from May 1, a quicker timetable than estimates. The mix of a rapid reopening and fresh funds kept the greenback bid.

US data was mixed, with jobless claims surprising with a bigger drop than expected while inflation remains tame for now.

Britain took its first steps in returning to normal by allowing more activities, the first in a four-pronged plan. This reopening began smoothly, with the caseload extending its decline. Friction with the EU: London and Brussels clashed over Brexit-related topics and also the production and distribution of vaccines. These diplomatic rows had no effect on sterling.

The UK economy shrank by 2.9% in January, when the entire nation entered a strict lockdown. These figures beat estimates.

The UK took a calculated risk of prioritizing a wider reach and stretching the time between the first and second doses to as much as three months. The test of delivering the booster shots now comes into play. The Bank of England's rate decision on Thursday stands out on the economic calendar. Governor Andrew Bailey recently reiterated that negative interest rates are off the cards and that technical work towards them should not be interpreted as a hint of upcoming implementation.

What does the BOE think of rising bond yields? By the time the "Old Lady" releases its statement, the Federal Reserve will have published its decision and forecasts, potentially unleashing significant price action. Bailey and his colleagues may prefer remaining in the shadows, refraining from commenting on Gilt yields in the Meeting Minutes released alongside the statement.

The bank's remarks on the current state of the economy, the impact of vaccines and the reopening will likely gain more attention. An upbeat view may boost the pound while remaining cautious and focusing on uncertainty could push it lower. The BOE does not publish its quarterly report at this juncture.

It will take time for the coronavirus relief package to make its way to the economy – but the Biden administration is already working on the next policy moves. For markets, the most intriguing bill would be a massive infrastructure plan worth as much as $2.5 trillion according to initial estimates. That would exceed the two recent stimulus plans.

If the president or other politicians begin laying down their plans, markets could move. The additional spending would send yields and the dollar higher, while focus on other non-fiscal priorities such as voting rights could allow bonds some breathing space.

One of the things that the administration ramped up is the distribution of vaccines. Investors will want to see additional states joining Alaska in offering the jabs to all adults. At the current pace, inoculations are set to reach 50% of the population by late May. Any notable acceleration or deceleration could move markets. The main event on the economic calendar is the Federal Reserve's meeting. In his last public appearance before the "blackout period," Fed Chair Jerome Powell only said that the recent rise in yields "caught my attention" but remained on the current policy path – $120 billion worth of bond-buying every month.

Will the bank change its policy? Additional support would lower long-term borrowing costs but would raise fears of inflation. On the other hand, dismissing inflation concerns – such as those reflected in recent surveys – could also cause turbulence in markets.

Powell and his colleagues may try to walk a fine line using their new quarterly projections – aka the dot plot. First, these could calm markets by showing that interest are unlikely to rise through 2023, putting stocks at ease. Secondly, by marginally raising inflation estimates, they would acknowledge market fears without causing panic.

Third, the Fed has stressed that 9.5 million Americans have yet to return to jobs lost in the pandemic, and by laying out an outlook that foresees a gradual comeback of the labor market, they could guide markets forward.

As mentioned, such a delicate path would be hard to pave amid everything that is going on, and investors will undoubtedly react to any subtle hint – intended or unintended – resulting in substantial dollar movements. Tension building up to the event will likely explode.

Ahead of the Fed decision, US Retail Sales figures due are of high interest, as the US economy is centered on consumption. After a whopping leap of 5.3% in January, headline sales and also the control group – aka "core of the core" – have likely declined in February. Nevertheless, support from the previous stimulus package could result in another positive month and boost the dollar.

After the Fed, weekly jobless claims remain of interest, as they are for the week in which the Nonfarm Payrolls surveys are conducted. Another gradual decline is likely.

Pound/dollar bulls continue benefiting from several upside indicators. The currency pair bounced off the 50-day Simple Moving Average and momentum remains to the upside. Moreover, it is also holding above the 100-day and 200-day SMAs while sticking to the broad uptrend channel.

Some resistance awaits around 1.40, which is psychologically significant and also capped cable in mid-March. Another noteworthy level is 1.4140, which temporarily separated ranges in late February. The 2021 peak of 1.4240 is the upside target for bulls.

Support awaits at 1.3865, which was a support line in early March. It is followed by 1.3750, which served both as resistance and then as support. The next significant cushion is only at 1.3565, which was a swing low in early February.

The Fed will likely be reluctant to intervene to push yields lower, allowing optimism about the US economy to push returns on debt and the greenback higher. While the UK is making progress toward exiting the crisis, America is now in the lead.

The FXStreet Forecast Poll is showing that experts are bearish in the short and medium terms while they see some upside in the long term. The relatively tight ranges reflected in the poll seem to reflect cable's recent limited ranges. 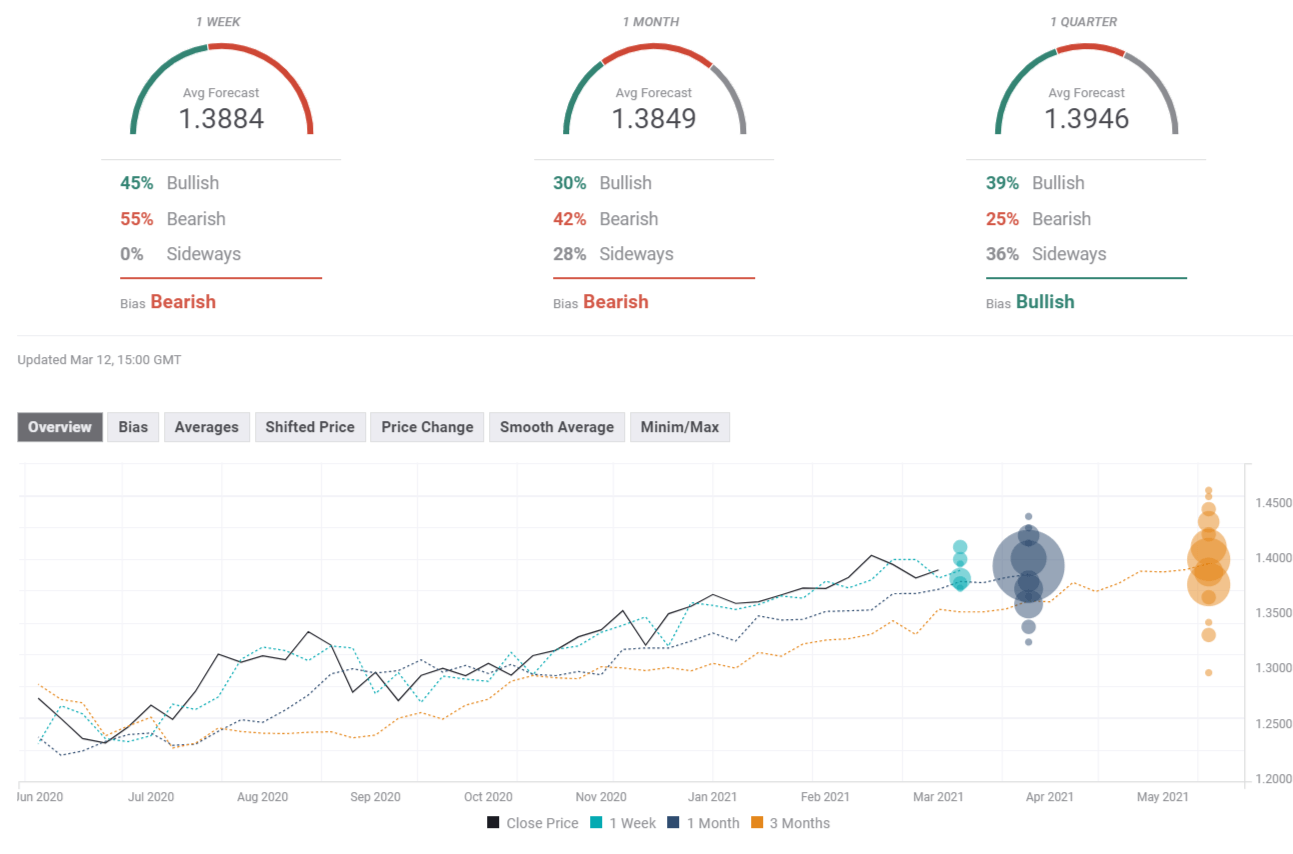