Is the Fed's dismissal of inflation set to boost the dollar? Or is optimism about to weigh on the safe-haven currency? Valeria Bednarik, Joseph Trevisani and Yohay Elam discuss the latest turbulence in markets as central banks diverge and ahead of the Nonfarm Payrolls.

Yohay Elam: Is inflation making a comeback? The ISM Manufacturing PMI's Prices component soared to 86 points and anecdotal evidence cited in the report also pointed to shortages and higher prices.
However, not all commodities tell that story. The starkest example is gold.

Valeria Bednarik:  Guess that more than inflation making a comeback is speculation that it may come back, with government yields soaring, although they seem to have calmed down this week.

Joseph Trevisani: And PPI doubled to 1.7% in January.  It is the combination of prospective demand and the flood of liquidity that is exciting inflation projections.
If we look back to the financial crisis, much worry that QE would bring on inflation. It didn't. Demand stayed weak. Now we have a potentially different situation.

Valeria Bednarik:  yups, and given that the Federal Reserve has endlessly reiterated that it will let it float above 2%, I would say that's the lesser of the concerns these days. It can spur some speculative spikes here and there, but I can see it being a real concern.

Joseph Trevisani: Yes, but PPI would come first.  Inflation has been the dog that didn't bark for a decade and more.  Despite the extreme monetarist conditions, inflation has continued to fall.  Global production and wage competition have ruled over liquidity.
I agree, even if we get a spike, the general conditions of the global economy have not changed.

Yohay Elam: The Fed is indeed ignoring inflation and more focused on employment.

Valeria Bednarik:  exactly, and it will be a slow process. Markets still believe in a soon-to-come economic recovery, but I doubt it.
Agreed, employment is a bigger issue for all central bankers.

Joseph Trevisani: Markets are disposed to see what they want to see, that is always true, but that doesn't mean it is not very possible.
"Still a man hears what he wants to hear and disregards the rest"

Joseph Trevisani: In this case, I think we get a strong recovery, a sort of mini-Roaring 20s

Yohay Elam: If market expectations turn to reality
Contrary to last week, we are seeing a bit calmer around inflation and yields this week. Maybe a blockbuster Nonfarm Payrolls would already move the Fed and end the calm?

Valeria Bednarik:  A swallow doesn't make a summer.. for sure a good report will help, but we will need at least three months of solid jobs' creation to move the Fed

Joseph Trevisani: The Fed focus has been the short end of the curve. The 2-year yield is essentially unchanged, while the 5, 10, and 30 have gained from 40 to 60 points.

Yohay Elam: The Reserve Bank of Australia bought bonds with the latest maturity being for 2028
Yield Curve Control

Joseph Trevisani: Goldman was also of the opinion that the recent rise in rates in the US would have a little economic impact.

Yohay Elam: I think it's a matter of pace. If yields gradually rise and remain below 2%, stocks should be fine
If not, do you think the Fed could introduce Yield Curve Control? Or in general, buy more bonds?
Powell speaks on Thursday, last appearance before the blackout period

Joseph Trevisani: I agree but I don't think the Fed is altogether unhappy about the yield increase.

Yohay Elam: I agree, the Fed would need to see yields above 2% or perhaps above 3% to become unhappy
Or stocks to fall by 15%
Any thoughts about the Fed's pain threshold?

Joseph Trevisani: Yes, though after the past year I doubt they will call it normalization

Valeria Bednarik:  not sure guys, the Fed has the pandemic as the perfect excuse to maintain the ultra-loose policy whatever happens with yields.

Joseph Trevisani: This is the 10-year 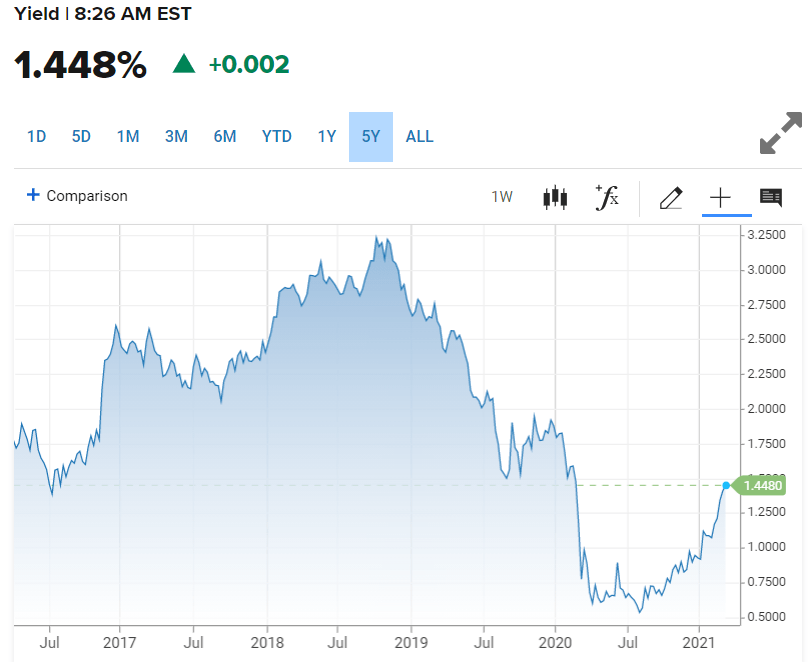 Valeria Bednarik:  We are talking about yields, not actual inflationary pressures.

Joseph Trevisani: I would guess up to 2% there will be no Fed issue, contingent on rapid moves.

Yohay Elam: The Fed repeats that there are ten million Americans out of work and that that is its main priority

Joseph Trevisani: True, but if those unemployed are the restaurant cohort as an example, low-interest rates, have a small impact. Take Manhattan, for instance, not the Sara Bareilles song. Thousands of restaurants have closed, only a return of workers to the mid-town core will bring them back. And that is assuredly not a Fed issue.

Valeria Bednarik:  The February Nonfarm Payroll report will be out this Friday and is expected to show that the economy recovered a modest 180K jobs. At this pace, it will take roughly six years to recover those 10 million jobs...

Joseph Trevisani: If the workplace is being remade by homework, beyond a certain point, zero rates will distort the economy, as they have already.

Valeria Bednarik:  I don't think the Fed has time to be worried about inflation, which remains tepid anyway

Joseph Trevisani: If the changes are permanent then after a point, the Fed is distorting the economy for a group of workers it cannot influence.

Yohay Elam: at the moment, the rise in yields is global but the response is not
The Fed is lassiez faire
The RBA, ECB and BOJ are alarmed
And that impacts currencies

Joseph Trevisani: Except for the short end. This is the 2-year yield  (CNBC) 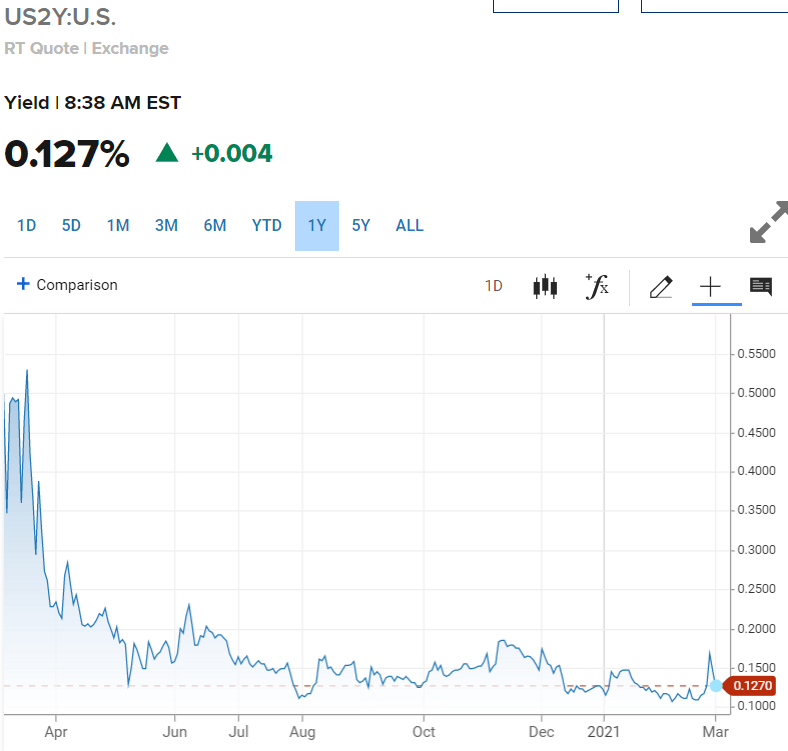 Valeria Bednarik:  Well, the RBA expanded its bond-buying program in February, and Japan has maintained for so long I can't remember.. guess their concerns won't have much of an impact at this point.  The ECB is another story

Yohay Elam: The ECB is threatening to act
But last week they bought less than normal
but if the ECB does ramp up its bond-buying, how will it affect the euro?

Joseph Trevisani: The euro will weaken.  It already has historical growth contrasts with the US which will not change.

Yohay Elam: And fiscal stimulus is minuscule in Europe

Joseph Trevisani: It seems unlikely, at least for the six-month horizon, that any of the major central banks will change policy.
The US is set to add another $2 trillion, only a small percentage of which will go to individuals and families.

Valeria Bednarik:  and such boost is mostly priced-in in markets.

Joseph Trevisani: About 3/4 is essentially pork-barrel special interest spending. Still, in a general economic sense, spending is spending.
Yes, it is priced in ahs has been for months.

Yohay Elam: Markets care only about the topline

Joseph Trevisani: Certainly.
If the US does grow faster, but interest rates do not respond, will the dollar stay unchanged?

Yohay Elam: Yields seem to be the arbiters
More fiscal and monetary stimulus is risk-on, dollar negative
but if yields rise on growth expectations, King Dollar is back

Valeria Bednarik:  The dollar will respond as it did in the past decade, despite inflation levels
indeed, higher inflation and chances of a rate hike is the ideal scenario, but we know it will take a couple of years before we can consider it
in the meantime, we need to work with what we have: yields

Joseph Trevisani: Markets will run with it nonetheless.

Yohay Elam: Apart from yields, I think US labor figures are set to have a greater impact
We have been complaining about the lack of response to the NFP. And rightfully so.
I think things will change soon, as it will determine the Fed's moves more than beforehand

Joseph Trevisani: If we get a good number from NFP I think it will support the dollar and the Fed will cheer but the economy needs months of job creation before we can claim recovery, but in the time equities will continue to rise, yields too.

Valeria Bednarik:  good, but not that much