Optimism over a probable truce between Russia and Ukraine offered a sigh of relief to risk-sensitive currencies such as the British pound. GBP/USD staged an impressive comeback, as the US dollar failed to capitalize on the hawkish Federal Reserve (Fed) outlook. Cable booked the first weekly gain in four, despite a cautious Bank of England (BOE) rate hike. Attention turns towards the next week’s UK inflation data and US Durable Goods data while geopolitical developments concerning eastern Europe will be closely followed as well.

GBP/USD witnessed a terrible start to the week on Monday and extended its previous declines to reach the lowest levels since November 2020 at 1.3000. Cable was late to catch up on the relief rally that kicked off across the market, as investors hoped for a de-escalation of the Russia-Ukraine war. This was mainly linked to the US dollar rally driven by US Treasury yields across the board, with benchmark 10-year Treasury yields recapturing the key 2% level.

Finally, sterling bulls fought back control and led a solid recovery rally in the major, which extended well into Thursday. The US dollar gave up its winning momentum alongside yields, as markets resorted to repositioning ahead of Wednesday’s critical Fed decision. As expected, the world’s most powerful central bank hiked key interest rates by 25 bps, lifting the target range to 0.25%-0.50%. The Fed’s dot plot chart threw a hawkish surprise by showing six more rate increases this year while Chair Jerome Powell said that every meeting is a live meeting.

The greenback failed to capitalize on the Fed’s hawkishness, as the broader market optimism on hopes for diplomacy on the Ukraine crisis outweighed and dulled its safe-haven appeal. Yet despite this, on Thursday, the currency pair pared all of its Fed-inspired gains, in response to the BOE’s cautious rate hike. The British central bank raised rates by 0.25% for the third straight meeting, although remained hesitant in signaling the future policy path amidst Ukrainian uncertainty and its risks to the country’s growth. However, the spot found support from the reports that Russia and Ukraine were advancing towards a peace agreement.

GBP/USD failed to find acceptance above 1.3200, as markets turned risk-averse yet again after officials from both sides reported no significant progress on the negotiations. US Secretary of State Antony Blinken said that Russia may be contemplating a chemical-weapons attack late Thursday. Traders also turned cautious, as US President Joe Biden met with his Chinese counterpart Xi Jinping on Friday to discuss Ukraine. King dollar attempted a comeback amid a damp mood, lack of relevant economic data and increased uncertainty surrounding the Russia-Ukraine conflict.

The market’s risk perception in relation to the incoming Russia-Ukraine updates combined with the Fed-BOE monetary policy divergence will remain the central theme, impacting GBP/USD in the week ahead.

On the macro front, cable traders brace for a quiet start to a busy week, with the first top-tier event likely to be released on Wednesday – with UK monthly inflation data. The UK Consumer Price Index (CPI) is seen accelerating to 6.0% vs. the previous 5.5% reading, in the face of the Ukraine crisis-led oil price upsurge. The UK annual Budget Release is also slated for release midweek.

The Markit Preliminary Manufacturing and Services from both sides of the Atlantic will drop in on Thursday. Also, of note remains the US Durable Goods and weekly Jobless Claims, which could keep traders busy.

The UK Retail Sales for February will follow on Friday while on the US calendar, the revised Michigan Consumer Sentiment Index (March) will grab some market’s attention. 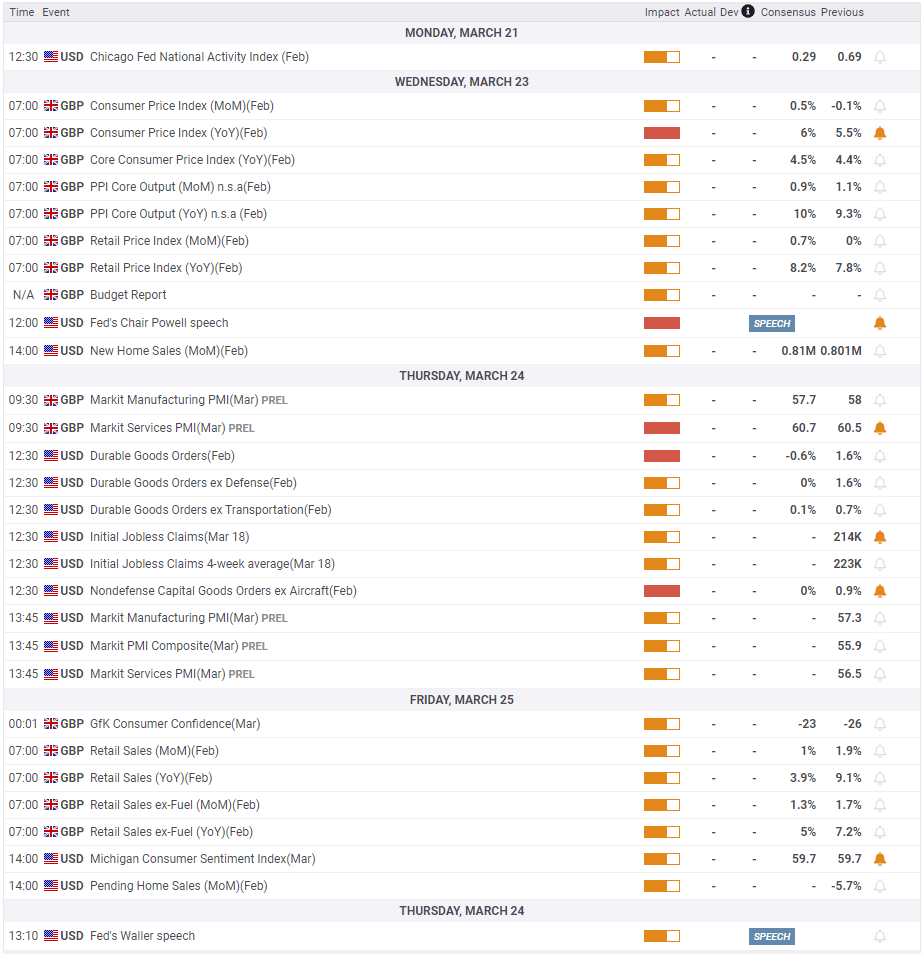 Although GBP/USD managed to close above the 200-week MA, which is currently located near 1.3000, the technical outlook doesn't point to a bullish tilt, at least in the near term.

The Relative Strength Index (RSI) indicator on the daily chart stays below 50 and the price remains well below the 20-day SMA.

According to the FXStreet Forecast Poll, GBP/USD has room to keep on rallying. The pair is seen bullish in the three time-frame under study, although on average, holding below the 1.3300 mark. Nevertheless, bears represent a small portion of the polled experts, leaving the door open for an additional appreciation.

The Overview chart, however, paints a different picture. The near-term moving average has barely bounced, but remains at multi-week lows, while the longer ones head lower. The bearish strength increases as time goes by, with increased chances of a downward extension below the critical 1.3000 threshold.