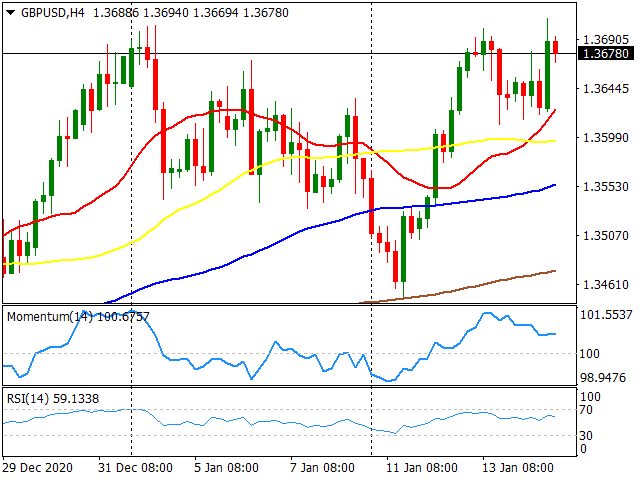 The GBP/USD jumped to 1.3709, reaching the highest intraday level since May 2018 and pulled back later. The move higher was boosted by a decline of the US dollar following Federal Reserve Powell's comments. He mentioned it is not time to talk about an exit strategy and warranted that the central bank will be very transparent when it starts to reduce QE. Market participants await US President-elect Biden stimulus package presentation. Wall Street was mixed, holding near record highs.

Economic data from the US came in weaker-than-expected with initial jobless claims rising unexpectedly to 965K, the highest since August. Market sentiment was unaffected. On Friday, economic data to be released includes trade and industrial production in the UK and retail sales and producer inflation in the US.

The pound recovered momentum on Thursday and also rose versus the euro. The UK's vaccination outlook is a positive development for the pound that could gain momentum if EUR/GBP breaks under 0.8860.