Major markets are settling in for a key announcement from the Federal Reserve today. After last week’s rebound (some of which driven by risk-off trading), the dollar has been gradually weakening again in recent sessions. The perception is that the FOMC will take on board the sentiment from Fed chair Powell’s Jackson Hole speech and adopt a greater tolerance for inflation. No changes are expected to rates, but will the door be opened to shifting the emphasis of asset purchases? The issues to look for today is how significant changes to the language in the FOMC statement will be. Also, look for dovish shifts in the dot plot projections of economic forecasts, regarding inflation, growth and unemployment. Expect volatility on yields and the dollar. Signs of potential progress in US Congress over a fiscal relief package. A $1.5trillion package does not appear to be getting too much agreement anywhere but could pave the way for further talks. UK inflation has come in slightly ahead of expected in August, even if there was a significant drop. The UK has avoided the fate of the Eurozone (which went into headline deflation recently). Essentially, all eyes are on the Fed today though.

Wall Street closed slightly higher last night with the S&P 500 +0.5% at 3401, whilst US futures are all but flat ahead of the Fed. In Asia, there was a mixed session, with the Nikkei just +0.1% higher, whilst Shanghai Composite was -0.6%. European markets are taking a cautious approach after Wall Street came off session highs into the close, with FTSE futures -0.6% and DAX futures -0.1%. In forex, there is the mildest USD negative, risk positive bias, but with little real drive to take a view. In commodities, the consolidation is across gold and silver this morning, whilst for oil it is interesting to yesterday’s decisive rebound followed up by further strong gains today of just under +2%.

The Fed looms large on the economic calendar today, but retail sales will also be keenly watched. First up though, is the Eurozone Trade Balance at 1000BST which is expected to see the surplus grow to +€19.3bn in July (from +€17.1bn in June). US Retail Sales are at 1330BST and are expected to show core ex-Autos sales having grown by +0.9% in the month of August (after a +1.9% improvement in July). The EIA Crude Oil Inventories are at 1530BST and are expected to show a stock build of +2.1m barrels (after a build of +2.0m barrels last week). The FOMC monetary policy decision is at 1900BST with no change expected to the Fed Funds range of 0.00%/0.25%. The interest will be in how the FOMC accounts for the new average inflation targeting in the statement, and the FOMC dot plots. Fed chair Powell has his press conference at 1930BST.

Chart of the Day – EUR/JPY

Is the euro rally hitting the buffers? In recent weeks since the ECB began to jawbone the euro lower, the Euro/Yen drive higher has fallen over at 127.05 to consolidate between 124.40/127.05. This consolidation has now broken a four month uptrend support and the bulls have lost control. With the deterioration in momentum indicators there is a real risk that this range could begin to turn corrective now. The support at 124.40 is key to this. The old key June high is now a key floor that is coming under growing pressure. A closing breach would complete a top pattern that would imply -265 pips of corrective move. More importantly, it would be the first breach of a key higher low since recovery began. The Stochastics rolling over again and RSI back under 50 is a concern for the bulls now and after yesterday’s decisive negative candle, the downside pressure is mounting. The hourly chart shows growing negative momentum near term, whilst initial resistance is at 125.25/125.75. 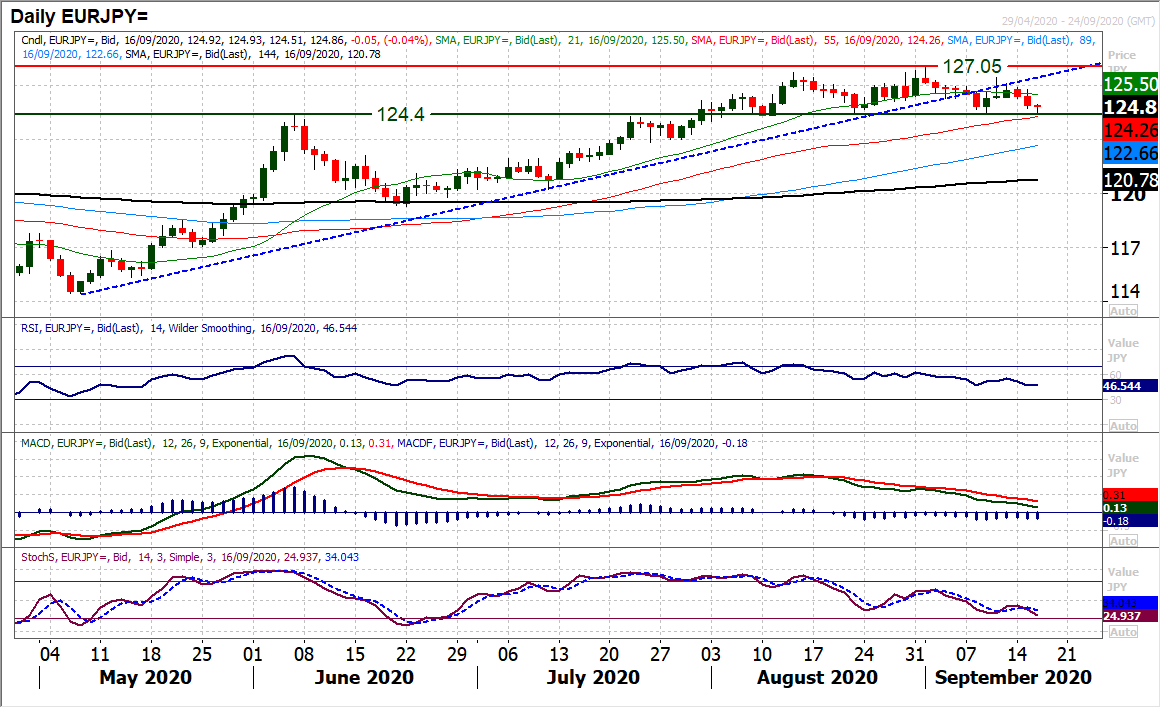 After decisive selling pressure over the past couple of weeks, the building blocks of recovery are now forming. We noted previously the basis of support around last week’s low of $39.30 which has held numerous tests since. However, now, with a decisive positive candle picking the market back above $40, the bulls are re-emerging. The immediate (an important) barrier to overcome now is at $41.30 which was an old key support through July, now turned resistance. Having already held the first attempt at a rebound last week, the implications of a closing break higher are growing. A decisive close higher would complete a base pattern and imply +$2 higher of target towards $43.30. Given the speed of the previous sell-off, the next really important resistance does not come in until $43.60 so there is plenty of upside potential in a rally. The hourly chart shows support initially $40.30/$40.80 and holding this as an area of a higher low would be an opportunity to buy for the recovery now. The OPEC+ meeting on Thursday is a key caveat. 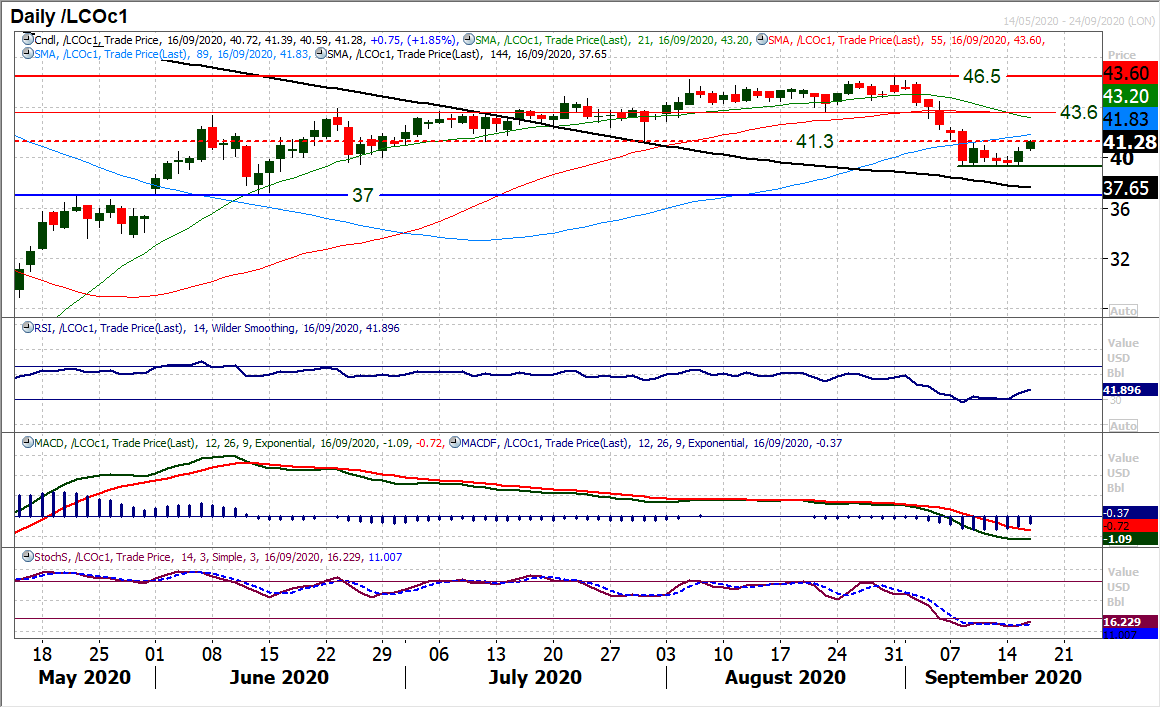 The Dow bulls will be slightly disappointed after a missed opportunity to grasp back control again yesterday. The bull failure at 28,230 has just held back the potential renewed drive higher. It now effectively draws resistance around 28,200/28,230 as a near term pivot. The failure dragged back a promising session to close all but flat on the day. There is though the building of improvement in momentum once more, with Stochastics crossing higher, whilst RSI back above 50 is also encouraging. The bulls will be concentrating on the very important basis of support around 28,450/28,530 which needs to hold in order to prevent a big top pattern formation. Futures are consolidating this morning ahead of the Fed meeting tonight. 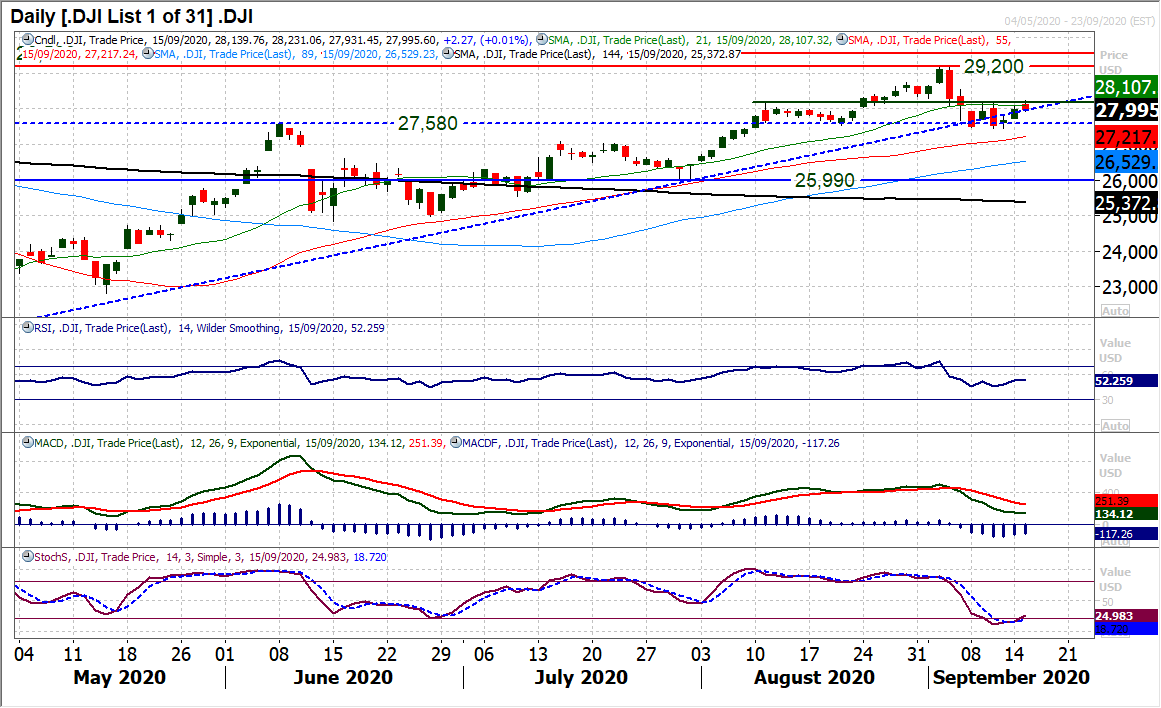