The Bank of England will have its monthly economic policy meeting this Thursday, and is largely expected to maintain the status quo. Governor Mark Carney and the rest of the policy makers will have to assess the effects of the sharp drop in the services PMI, the global economic slowdown and the continued rise in house prices over the economy, all of which support the case for keeping rates low for some more time.

Additionally, inflation in the UK remains subdued. UK inflation rate fell back to 0.0% in August, down from 0.1% in July, weighed by falling oil prices, as the commodity traded at its lowest in more than six years during that month. This Wednesday, the  BRC said shop prices in September were 1.9% lower than a year earlier, a bigger fall than Augusts' 1.4% decline.

On the other hand, the economy has been steadily creating jobs, whilst the latest manufacturing and industrial production data picked up in August from the poor figures posted a month before. The uneven development of the different economic sectors however, suggests the UK is not yet ready for a tighter economic policy, despite the comments made by Carney, over a rate hike coming "sooner than expected."

Overall, the market will be looking for any possible change in the MPC votes, which stand currently at 8-1, with only one member pledging for a rate hike. Should more officers vote for a rate increase, the Pound will likely surge on speculation that the Central Bank is getting closer to a lift-off.  Also, the market will assess the tone of the statement, as a dovish stance, expressing concerns over the ongoing situation, may lead to Pound weakness, moreover it the votes remain unchanged.

Given the ongoing dollar's weakness, and that a dovish stance is pretty much  priced in, the GBP/USD pair may stall its recovery on Thursday, and even pull back below the 1.5200 level with an extremely disappointing outcome, but fresh lows are not seen at the time being. Technically speaking, the daily chart shows that the pair is currently around the 38.2% retracement of its latest decline, and aiming to break above its 20 SMA, while the technical indicators are recovering strongly from oversold territory, not yet confirming an upward continuation. A break above 1.5315, alongside with a less dovish than-expected tone in the Minutes, should lead to a steady advance in the pair, up to the 61.8% retracement of the same rally at 1.5445. 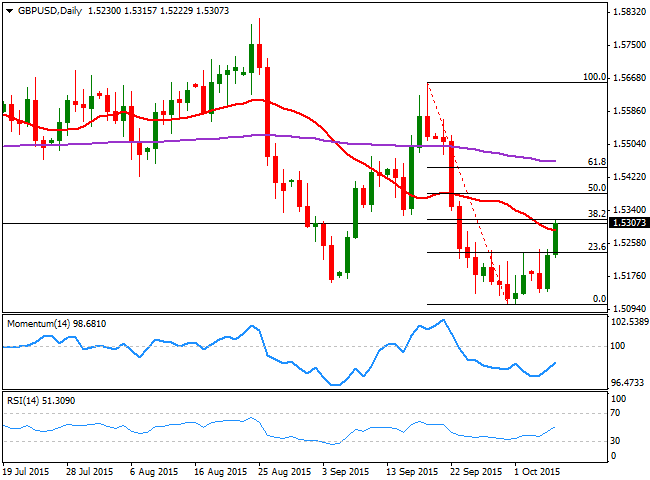