The EUR/USD pair plummeted this week and finished it in the 1.0520 price zone, as fear overshadowed everything else. The macroeconomic calendar was full of red flags related to slowing economic growth and overheating inflation, which in turn spurred demand for safety.

It’s all about inflation

The European Central Bank was the main catalyst for the dollar’s rally, although not the only one. The central bank held a monetary policy meeting and, as widely anticipated, maintained rates on hold. Also, as expected, European policymakers anticipated a rate hike for July, although of 25 bps, half the 50 bps financial markets were pricing in.  The Governing Council added that another hike will come in September, with more in the docket afterwards, although the scale of each increment would depend on the medium-term inflation outlook.

More relevantly, the ECB upwardly revised its inflation projections, now seen at 6.8% this year, well above the 5.1% predicted in March, while it is seen at 3.5% in 2023 and 2.1% in 2024. At the same time, policymakers slashed their growth estimates, down from 3.7% to 2.8% in 2022 and to 2.1% for 2023. The 2024 figure was upwardly revised from 1.6% to 2.1%. ECB´s inflation estimates have been upwardly revised quarter after quarter, clearly showing that policymakers are chasing it from behind, incapable of controlling the situation.

President Christine Lagarde also mentioned the war in Ukraine, which is pushing energy and food prices sharply up. But inflation may be the least of the concerns. Millions of tonnes of grain are sitting in warehouses and Ukrainian ports, unable to be exported due to the war. The World Trade Organization warned about a global food crisis as the price of edible commodities has soared since Russia invaded neighboring Ukraine.

The market sentiment worsened on Friday following the release of US inflation data. The May Consumer Price Index jumped to 8.6% YoY, while the core reading, which excludes volatile food and energy prices, rose by 6%, both above the market’s expectations. The White House warned beforehand that the figures would be hotter-than-estimated, but that did not prevent a financial shock. The figures exacerbated Wall Street’s sell-off triggered by the ECB,  reflecting investors’ concerns.

In four words, more of the same. Neither inflation will recede nor growth will pick up anytime soon. Central Banks’ future decisions have been already priced in.  Meanwhile, governments are taking uncoordinated and limited actions that are doing little to tame price pressures.

Just as an example, crude oil prices continued to rally, with a barrel of WTI now trading above $120 and at its highest since March, when it reached a multi-year high of $130.50 a barrel.

Data-wise, the focus next week will be on the US Federal Reserve, set to announce yet another 50 bps hike. The central bank will also release fresh Economic Projections. Market players have been speculating about a potential pause in rate hikes in September, meant to assess the effects of the previous measures on the economy. Given the latest inflation figures, the Fed may refrain from suggesting it but, on the contrary, announce continued aggressive tightening. The US will also publish May Retail Sales, which is seen up a modest 0.2% MoM.

In Europe,  Germany will release May inflation data and the June ZEW survey on Tuesday, while the EU will publish the same figures on Friday.

The American currency may suffer from temporary setbacks, but it will end up strengthening even against other safe-haven assets.

Technical readings in the weekly chart support the bearish case, as the 20 SMA has accelerated its slide below the longer ones, now heading firmly south at around 1.0890. Technical indicators, in the meantime, have resumed their slides within negative levels after correcting oversold conditions.

The daily chart shows that technical indicators head lower almost vertically, accelerating south after breaking below their midlines. The 20 SMA maintains a modestly bullish sope, but it has rejected bulls on Friday, all of which points to a steady decline in the upcoming sessions.

The pair bottomed a couple of times in mid-May at 1.0460, the next immediate support level. A break below the latter should favor a retest of the year low at 1.0348, while below this last, the next potential bearish target is 1.0260.

A recovery above the 38.2% Fibonacci resistance at 1.0665, on the other hand, should temporarily interrupt the bearish trend and result in another test of the 1.0770/80 price zone. 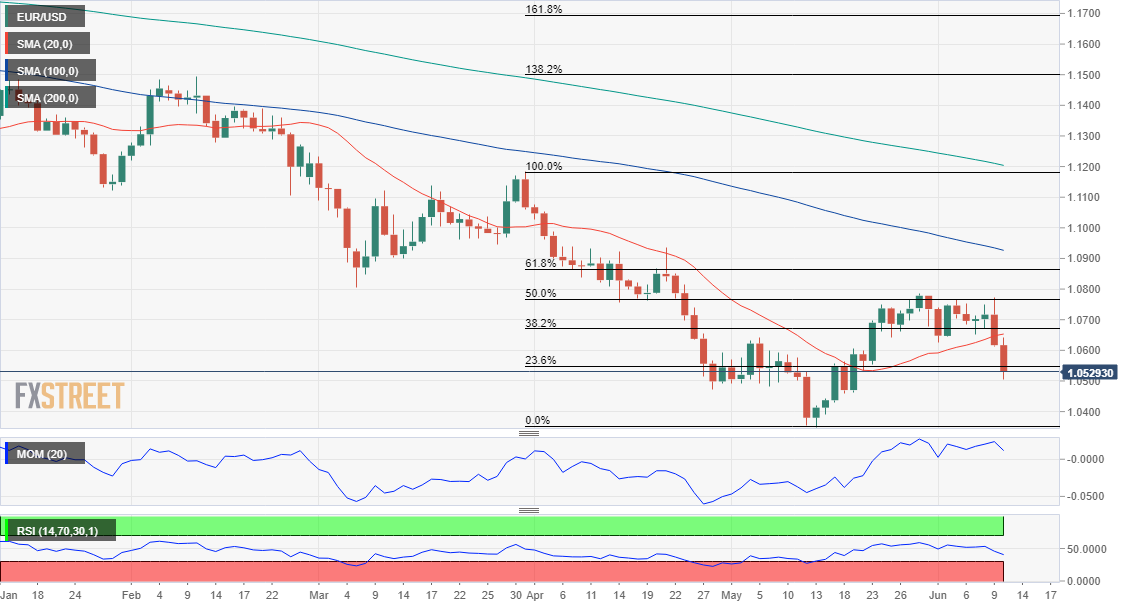 The   FXStreet Forecast Poll shows that the sentiment around EUR/USD is bullish in the near term, mostly because the ECB and US inflation somehow cough speculative interest off-guard. On Average, the pair is seen at 1.0760. The bearish tone of the monthly and quarterly views are also pre-ECB and US inflation, so it should not be a surprise if bears increase their bets next week. On average, the pair is seen in the 1.06 area, as roughly 50% of the polled experts are looking for more slides.

In the Overview chart, the three moving averages have lost their bearish strength and turned flat. The spread of potential targets is quite even in the monthly and quarterly perspectives, although the number of lower lows keeps increasing, reflecting medium-term selling intentions.