The EUR/USD pair bounced for a second consecutive week from around 1.0760,  settling nearby after reaching a high of 1.0935 on Thursday. The greenback came back in fashion on the last trading day of the week, as risk factors outweighed encouraging macroeconomic headlines.

The spike came on the back of a surprise hawkish shift from some European policymakers, as vice-president Luis de Guindos said that he believes inflation is close to a peak but added that a rate hike is possible in the second half of the year, depending on macroeconomic data. Also, Governor Pierre Wunsch said that he is willing to consider raising the deposit rate in July.

The enthusiasm, however, was short-lived as market participants continued demanding safety amid concerns about a US recession, rising bottleneck issues, and the Eastern European crisis. The yield on the US 10-year Treasury note flirted with 3% this week and currently stands at 2.93%. Inflation in the US hit 8.5% YoY in March, a four-decade high, while the EU one was confirmed at 7.4%, also a multi-decade high, although slightly lower than initially estimated. Hopes that inflation could be about to recede are firmer than macroeconomic signs of actually easing price pressures.

Financial market unrest is being exacerbated by the coronavirus outbreak in Shanghai. The region reported record contagions and deaths in the last 24 hours, which likely means the ongoing lockdown will continue. According to the latest report, 20% of the world’s active container ships are currently trapped in traffic jams in congested ports. Roughly 30% of the backlog is in China. Supply-chain issues have been one of the main reasons behind the global inflation run.

On the other hand, the Russian invasion of Ukraine accounts for thousands of dead civilians. Moscow's persistent attacks on Mariupol have resulted in more international sanctions, while the US and several European countries have escalated their weapon provisions to Kyiv. The crisis is not only fueling bottlenecks issues, but also commodity prices, which end up aggravating consumer price indexes.

Central bankers’ hawkishness has become the new normal.  The International Monetary Fund Spring meeting has included speeches from policymakers from around the world, and pretty much every central bank, except the Bank of Japan, is paving the way for a more aggressive monetary policy tightening, which anyway seems not enough to contain the situation.

Such a scenario provides fertile ground for a dollar rally, which will likely continue in the weeks to come, as none of the negative factors that affect markets is set to recede in the foreseeable future. High yielding stocks are also likely to fall, although US indexes are likely to suffer less, as the US Federal Reserve has been long paving the way for an aggressive rate hike, most of which has been already priced in.

As for upcoming ECB actions, it's still unconfirmed if policymakers will take action in July, as anticipated this week, or whether they will opt for a 25 bps or 50 bps hike, which leaves room for surprises that may temporarily boost the common currency.

Growth and inflation under the spotlight

The macroeconomic calendar will bring some interesting figures in the upcoming days, as the US will release March Durable Goods Orders, foreseen up 1% MoM, and the preliminary estimate of the Q1 Gross Domestic Product, expected to post a modest 1%. Germany and the EU will also publish their GDP figures, foreseen at -0.3% and 0.3%, respectively. Germany and the EU will also release the preliminary estimates of their April consumer price indexes, while the US will unveil the March core PCE Price Index, seen at 5.5% YoY.

The EUR/USD ended the week unchanged around the 1.0800 figure, retaining the long-term bearish potential intact. The weekly chart shows that it topped around the 38.2% retracement of its latest daily decline, measured between 1.1184 and 1.0756 at around 1.0920. In the aforementioned time frame, the 20 SMA maintains its firmly bearish slope well above the current level and below the longer ones, as technical indicators hover near oversold readings with uneven directional strength. Still, there are no signs of downward exhaustion that may hint at a corrective advance in the next few days.

The daily chart shows that the risk is skewed to the downside. A bearish 20 SMA capped advances, converging with the aforementioned Fibonacci level, while the 100 SMA also heads south now around the upper end of the daily range. Technical indicators, in the meantime, remain within negative levels, with the Momentum consolidating and the RSI maintaining its bearish slope, reflecting prevalent selling interest. 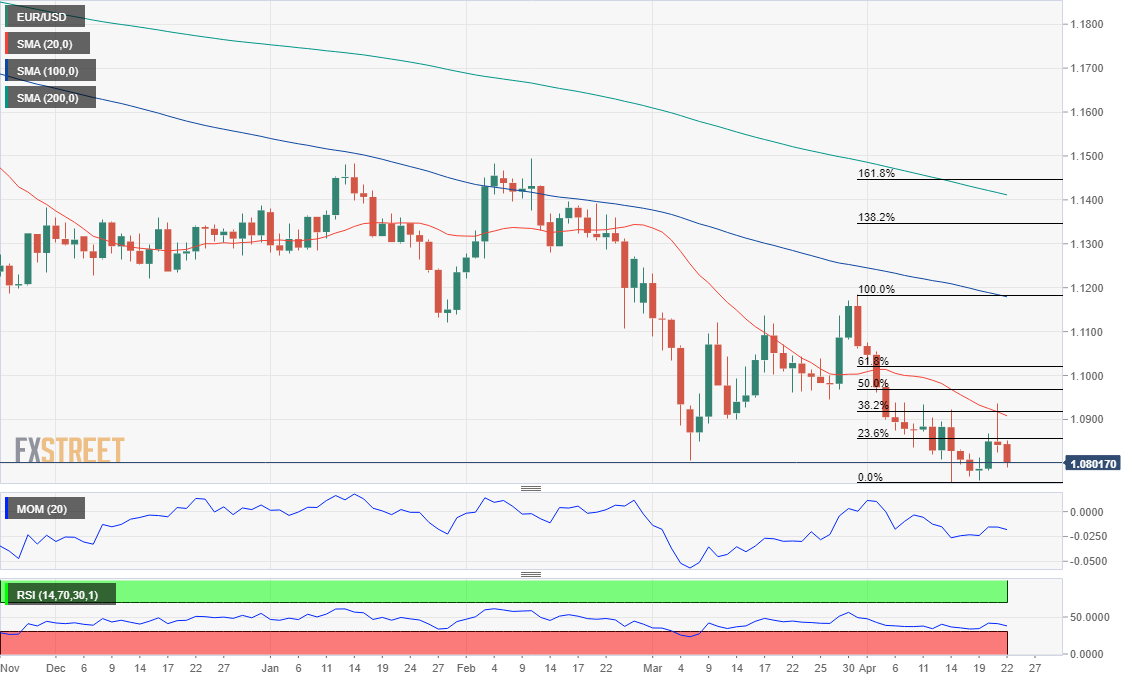 According to the FXStreet Forecast Poll, the EUR/USD pair is seen extending its slump in the near term, but the number of those betting for a bounce increases in the monthly and quarterly views. The near-term average target is 1.0767, while in the wider perspective the pair is seen around the 1.0900 level.

The Overview chart, however, shows that bears are still in control. The three moving averages under study offer bearish slopes. In the weekly perspective, the pair is seen confined to a tight range but the range widens in the monthly and quarterly views. Nevertheless, the pair is hardly seen above the 1.1200 figure, while the number of bets to 1.0600 and below keeps increasing.

Gold attempts to claim $1,800 as US yields push lower

After having failed to hold above $1,800 with the initial reaction to the US inflation data, gold staged a downward correction before regathering bullish momentum. With the benchmark 10-year US T-bond yield staying deep in the red, XAU/USD tries to claim $1,800.