A dull week comes to an end, with the EUR/USD pair closing it little changed in the 1.1870 price zone.  The pandemic fatigue has extended its claws into financial markets, as investors struggle to balance vaccine hopes and fresh restrictive measures in the northern hemisphere.  A light macroeconomic calendar and no progress in other fundamental developments exacerbated the quietness.

The focus remains on growth

Several front-runners´ vaccine producers reported encouraging progress in their coronavirus shots, according to early results from stage three trials. Following Pfizer´s announcement last week, Moderna, Oxford, the Russian Sputnik V and China’s Sinovac also provided updates, and all of them are reported to be over 90% effective in preventing contagions without significant side-effects.

Yet, at the same time, the world is reporting over 600K new cases per day. The US continues to lead the list, with more than 170K cases per day. As the week went by, more US states and cities announced restrictive measures to curb the spread, although to no avail. Strict lockdown measures in Europe seem to help a bit, but the situation in the Old Continent is far from optimal. Market participants are worried, as a steep economic downturn became clear in this the last quarter of the year.

Meanwhile, central bankers repeated their call for fiscal stimulus. Federal Reserve Chair Jerome Powell is likely the only one that has not hinted at any action in December. His European counterpart, Christine Lagarde, has suggested that a large easing package is coming. Both have remarked the relevance of additional support from lawmakers.

About the later topic late on Thursday the US Treasury Secretary Steven Mnuchin sent a letter to Fed’s chair Jerome Powell, asking to return unused funds from five emergency programs that are set to expire in December. Mnuchin claims that Congress would then be able to use the money for other purposes. At the same time, Mnuchin asked Powell to extend another four emergency credit facilities.

Macroeconomic data out these days hinted at a lousy Q4. US Retail Sales were up by a modest 0.3% in October, while Initial Jobless Claims in the week ended November 13 increased to 742K. The European Union confirmed that annual inflation fell 0.3% YoY in October.

Next Monday, Markit will release the preliminary November estimates of its PMIs. Manufacturing activity and services output are seen contracting from October levels in Europe, while US ones are seen stable.

Germany will publish next Tuesday is Q3 Gross Domestic Product, expected to be down by 10.1% in the three months to September, and the November IFO survey. The US will unveil later in the week October Durable Goods Orders. It will be a shortened week, as the US celebrates Thanksgiving on Thursday.

The EUR/USD pair is holding at the upper end of its previous two-month range, having met sellers on approaches to the 1.1900 area. The weekly chart indicates that chances of a bearish extension remain limited, as the pair keeps developing above a bullish 20 SMA. The longer moving averages develop over 500 pips below the current level. In the meantime, technical indicators are flat, the Momentum around its midline and the RSI closer to overbought readings.

In the daily chart, the risk is skewed to the upside, as technical indicators stand near weekly highs, although losing directional strength. The pair remains above all of its moving averages, with a bullish 100 DMA approaching a flat 20 DMA, reflecting the longer-term prevalence of bulls. 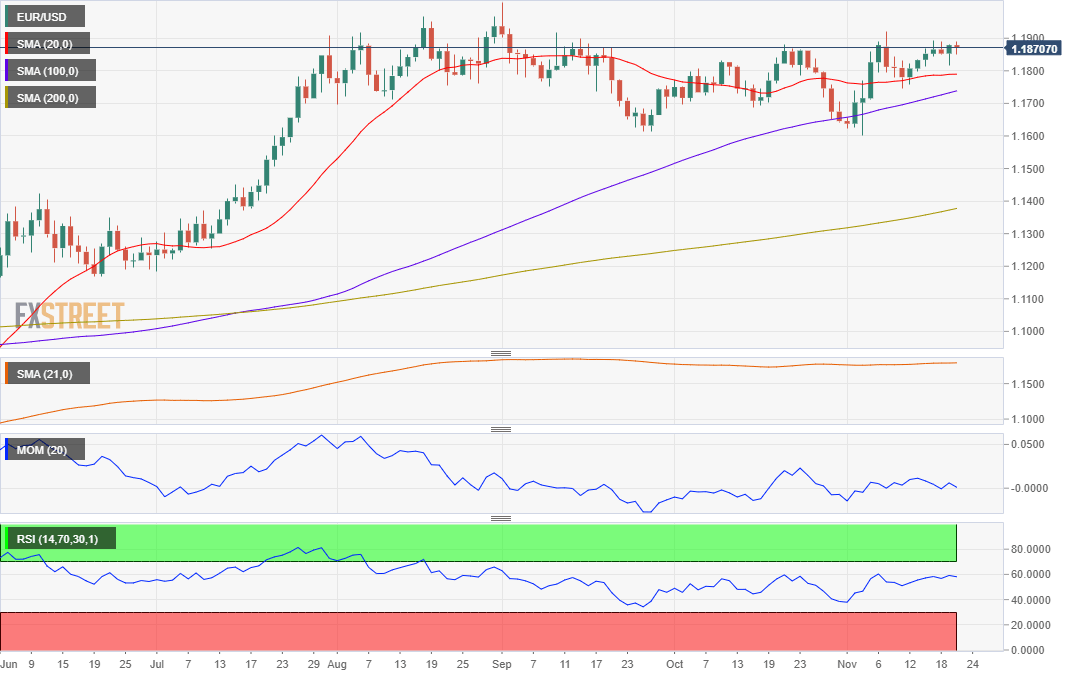 The FXStreet Forecast Poll is reflecting the current market’s mood. The pair is seen flipping from bullish to bearish and then back to the upside in the three time-frame under study.  Weekly basis, the pair is expected to remain around the current level on average, and to remain below 1.1900 for the rest of the month. In the wider perspective,  most polled experts are bullish, lifting the average target to 1.1939.

The Overview chart shows that the weekly moving average and the monthly one remain flat. A modest bullish potential emerges. Most targets accumulate between 1.18 and 1.24, unexpected levels for EUR/USD a couple of months ago.

EUR/USD stays depressed near 1.2050 amid firmer yields, ahead of Powell

EUR/USD remains on the backfoot around 1.2050, as the US dollar rises with Treasury yields. Concerns about the pace of the yield surge dent the risk appetite. Focus on EZ retail sales and US data ahead of Fed Chair Powell’s speech.

GBP/USD steadies around 1.3950 as bond bears catch a breather ahead of Powell