So, here we are, another Friday when the "buy the rumor, sell the fact" sends the dollar marginally lower across the board. Still, and despite the intraday slide, the greenback is poised to end the week clearly higher against all of its major rivals, but the Euro. The common currency got a lift after the ECB's monetary policy meeting, as despite the Central Bank left its policy unchanged, offered a more optimistic economic outlook.  Draghi remarket that " there is no longer that sense of urgency in taking further actions ... that was prompted by the risks of deflation." Nevertheless, he also added that the ongoing easing program will remain in place, and that rates could go further lower if needed, trying to prevent the EUR to appreciate further.

The US monthly employment report was quite encouraging, as the US added 235,000 new jobs in February, whilst the unemployment rate edged down to 4.7% and the underemployment rate to 9.2% from previous 9.4%. Wages were mixed, as monthly basis rose by 0.2%, missing expectations of 0.3%, but year-on-year surged to 2.8%, whilst January reading was revised higher, also to 2.8%.

Data supports the rate hike anticipated by US monetary policy makers for next week. A 25bps hike is already priced in at this point, so market's reaction could be limited next Wednesday, with attention then shifting to what's next on hikes, and how many more the Central Bank is willing to offer this year.  Afterwards, the market will shift back to trading politics, both from Europe and the US. 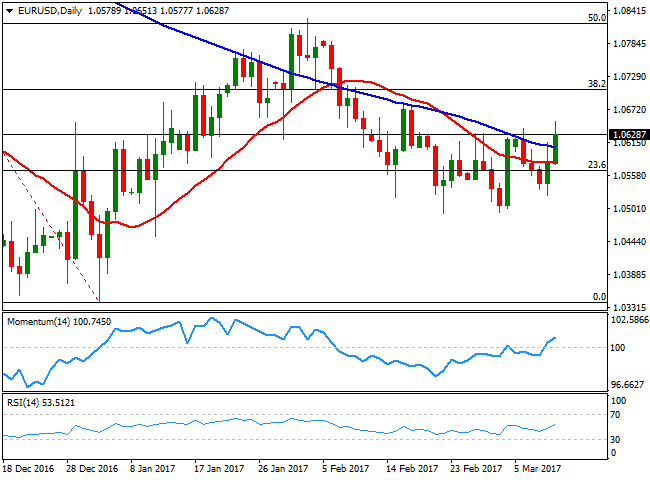 Technically, the weekly chart shows that the EUR/USD pair is pretty much flat, although it managed to spike up to 1.0651, a fresh 3-week high, where a bearish 20 SMA contained the advance. The Momentum indicator in the mentioned chart is flat around its 100 level, whilst the RSI indicator lacks directional strength around 44, all of which indicates a limited upward potential. In the daily chart, however, the pair presents a modest upward potential, as the price is settling above still bearish 20 and 100 DMAs, whilst indicators head north within positive territory. Still, the pair has a major resistance in the 1.0700/20 region, where it stalled multiple times this year, and where it also has the 38.2% retracement of the post-US election decline. It would take an advance above this level to talk about a bullish continuation, that can extend up to 1.0820, the 50% retracement of the same decline.

Sentiment towards the common currency remains strongly bearish according to the FXStreet weekly Forecast poll,  but the lower end of the upcoming range has been upwardly revised, as bears account for 74% in a three-month view, but the average target is now 1.0456. Still, not even in the most optimistic case the pair is seeing beyond 1.1000 this March, as investors are convinced the Fed will pull the trigger on rates this upcoming week.

Despite the latest decline, the Pound is seen bullish during the upcoming week, but holding around the current level. Bearish sentiment resumes in a one-month view,  but the average target remains stuck around 1.2200 in all the periods under study.

As for the USD/JPY, sentiment turned neutral for this week, with the number of bullish experts matching bears and the price seen steady around 115.00. The possibility of a downward move has been drastically reduced, as the base of the upcoming range has been lifted to 114.00, with very limited exceptions seen  the pair below that level during the next three months. Still, market is not fully convinced on a bullish breakout, as the pair is seen averaging 115/116.00 during the next weeks, with bulls accounting for just a 39% by the end of the quarter.

There are no clear trends coming from the FXStreet study this week, although sentiment favors the greenback. Still, political uncertainty pressures investors to remain cautious on long-term calls, and seems unlikely the picture will be clearer until the second half of the year, when European elections are over, and hopefully, US policies defined.

The bullish scenarios are fulfilled and bring the Top 3 to the launch pad. Ether's dominance shoots up and improves by more than 10% in a single day. The movement shows strong potential not seen since the 2017 bump.