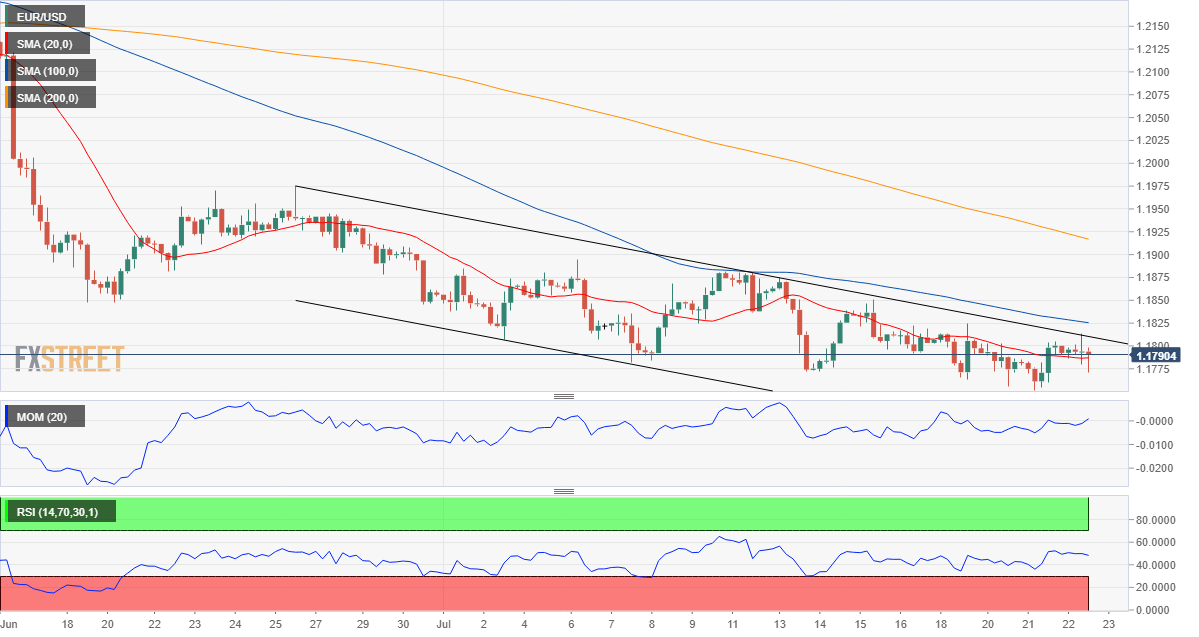 The EUR/USD pair is down on a daily basis, despite a better market’s mood. The shared currency took note of the European Central Bank’s dovish stance. As widely anticipated, the ECB decided to leave the interest rates on the main refinancing operations, the marginal lending facility and the deposit facility unchanged at 0.00%, 0.25% and -0.50%, respectively. Policymakers reaffirmed that the PEPP would continue to run significantly faster than at the beginning of the year.

On the so-long awaited new forward guidance, the Government Council noted that interest rates will remain at present or lower levels “until it sees inflation reaching two per cent well ahead of the end of its projection horizon and durably for the rest of the projection horizon, and it judges that realised progress in underlying inflation is sufficiently advanced.”

Meanwhile, the US published Initial Jobless Claims for the week ended July 16, which increased to 419K, missing the market’s expectations. The Chicago Fed National Activity Index printed at 0.09 in June, down from the previous 0.26. The country will publish Existing Home Sales for June later in the day.

The EUR/USD pair peaked at 1.1813 right after the announcement and later fell to 1.1770. As President Christine Lagarde speaks, the pair seesaws between such a range, unable to firm up above 1.1800. The 4-hour chart shows that the pair keeps developing inside a descendant channel,  offering a neutral-to-bearish stance. The pair is stuck around a mildly bearish 20 SMA while technical indicators hover around their midlines. Further declines are likely on a break below the weekly low at 1.1751.