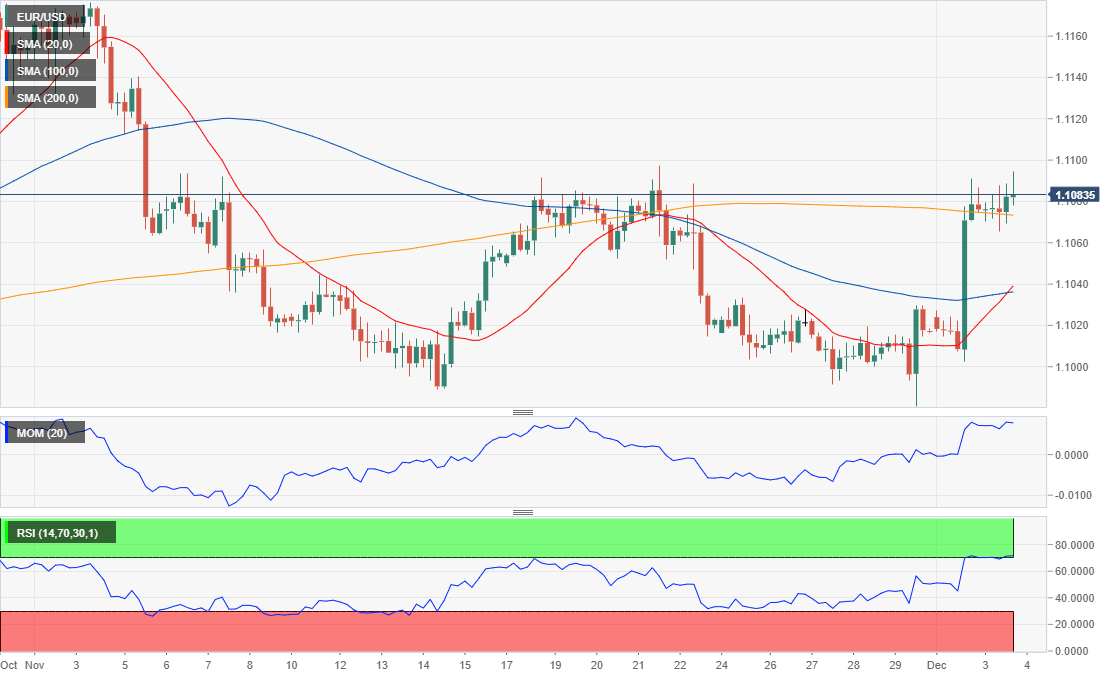 The American dollar remained under selling pressure, although the EUR/USD pair was unable to extend its rally, having spent the day consolidating between 1.1065 and 1.1090. US President Trump was responsible for introducing additional fears about a global trade war, by announcing plans to impose tariffs of up to 100% on French products worth $2.4B in response to France's digital tax. French Finance Minister Le Maire quickly responded and said that the EU wouldn’t hesitate to strike back. The risk-off mood prevailed through the different sessions, with the greenback under pressure

The  EU released the October Producer Prices Index, up in the month by 0.1% but down by 1.9% when compared to a year earlier. The US, on the other hand,  published the ISM-NY Business Conditions Index, which improved in November to 50.4 from the previous 47.7, also beating the market’s expectation.

This Wednesday, Markit will unveil the final versions of the Services PMI and the Composite PMI for the Union and the US, while this last, will also release the official ISM Non-Manufacturing PMI, foreseen at 54.5 from the previous 54.7.

The EUR/USD pair is near but below 1.1100, having extended its weekly rally by a couple of pips. Also, buyers were aligned as expected at around 1.1065, the 38.2% retracement of the October rally. The pair bottomed at the 61.8% retracement of the same rally last week, and at the current level, could mean higher highs on the horizon. In the 4-hour chart, the pair has settled above all of its moving averages, with the 20 SMA about to cross above the 100 SMA, while technical indicators hold within overbought levels, with modest upward slopes, all of which supports another leg north.