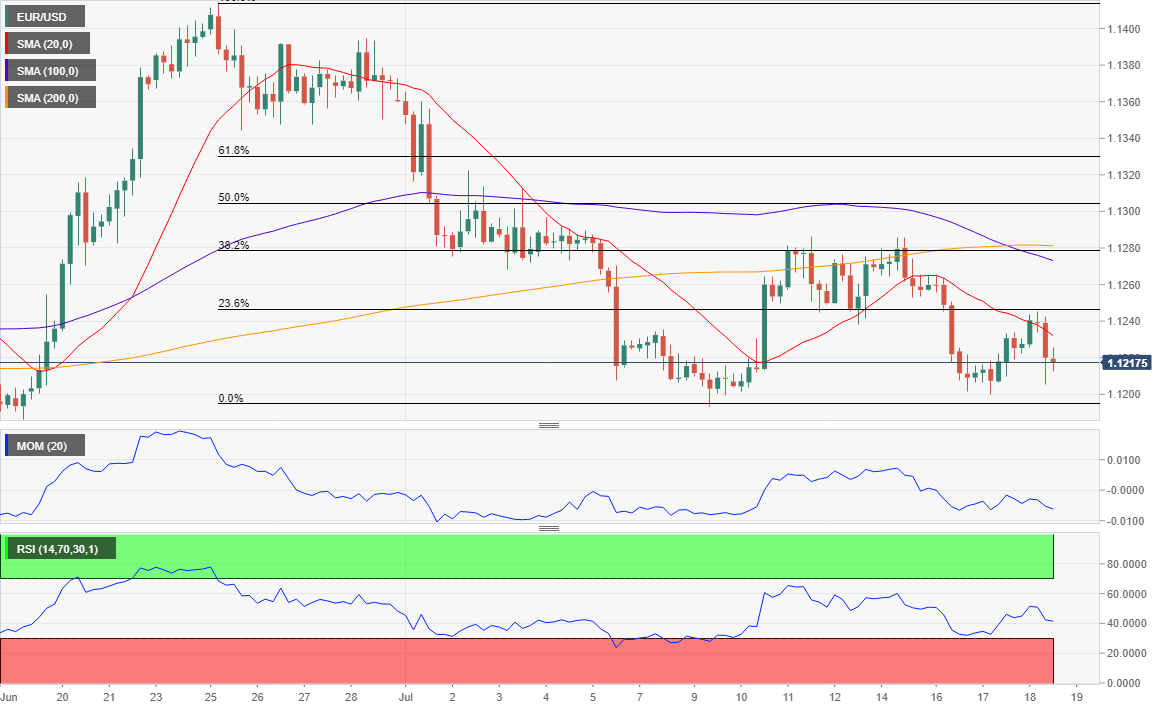 The EUR/USD pair peaked at 1.1243 amid broad dollar’s weakness dominating the FX board during the first half of the day, suddenly collapsing to 1.1204 mid-London session. Such decline was the result of headlines indicating that ECB’s members are considering revamping the central bank’s inflation target of “below, but close to 2.0%.” Prevalent dollar’s weakness helped the pair to bounce to the 1.1220 price zone, ahead of the release of US data.

According to the official release, Initial Jobless Claims for the week ended July 12 met the market’s expectations by printing 216K, while the Philadelphia Fed Manufacturing Survey resulted upbeat in July, reaching 21.8, well above the expected 5.0 and the previous 0.3. Data gave the greenback a boost against its weakened European rival. Later in the day, Fed’s Bostic and Fed’s Williams will speak in separated events.

The EUR/USD pair retreated from the 23.6% retracement of its daily decline measured between 1.1411 and 1.1181 at 1.1245, after a couple of failed attempts to surpass the 38.2% retracement of the same slump earlier this week, which maintains the risk skewed to the downside.  The 4 hours chart indicates that bears hold tight to the driver’s seat, as the pair briefly surpassed a firmly bearish 20 SMA now developing below it, while the 100 SMA is crossing below the 200 SMA, both converging with the 38.2% retracement of the mentioned slide at around 1.1280. Technical indicators in the mentioned chart resumed their declines after nearing their mid-lines, supporting further declines ahead, particularly if the pair breaks below 1.1181, this month low.