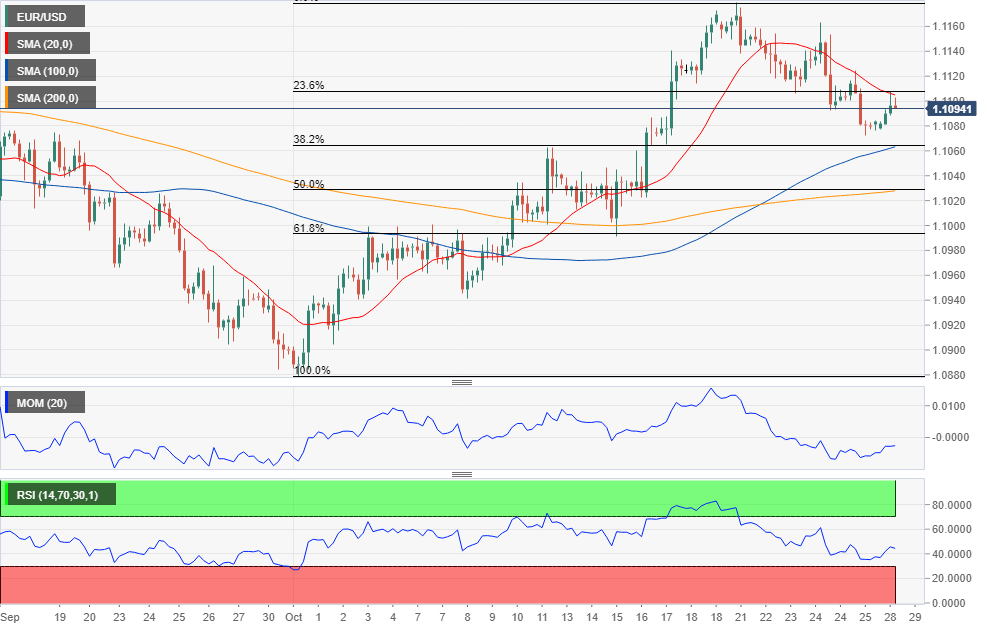 The EUR/USD pair has recovered some ground this Monday, reaching a daily high of 1.1106, and trading not far below the level. Speculative interest is unmotivated amid a scarce macroeconomic calendar and first-tier data programmed for later this week. The positive tone of equities and a modest uptick in government debt yields are playing against the greenback.

The European Union released September Money Supply, which resulted at 5.5% YoY, missing the market’s expectations, while for the quarter it rose by 5.5% as expected. Private Loans were up by 3.4% against the expected 3.5%.

The US has already released the September Chicago Fed National Activity Index, which came in at -45 against the expected -0.37, and the Goods Trade Balance for the same month, which posted a deficit of $70.39B. Wholesales inventories declined by 0.3%. Pending of release is the October Dallas Fed Manufacturing Business Index, expected at 1.4 from the previous 1.5.

The EUR/USD pair met sellers ahead of the 23.6% retracement of its latest bullish run, with the 38.2% retracement of the same advance providing immediate support at 1.1065. In the 4-hour chart, a bearish 20 SMA converges with the mentioned Fibonacci resistance, while technical indicators remain within negative levels, although lacking directional strength. The overall stance is negative, although little should be expected on this first day of the week.