European stock markets sold off earlier, with DAX and FTSE100 down -1.3% and -0.8% respectively despite better than expected Eurozone and UK PMI readings. However, they recovered from the early losses and now trade up +0.9% and +1.2% respectively. The US markets opened with gains of around 0.2% following the US Claims data which saw another 2.438 million added to the unemployment register, but last weeks data was revised lower by 300,000 and the 4 week average is now down to 3.042 million from 3.543 million.

Risk appetite started to wane in quiet trade during the course of the Asian session and indices pared early gains amid concerns of a fresh round of trade tensions. The US Senate yesterday passed a bill that could bar some Chinese companies from listing on US exchanges and there was fresh criticism from US President Trump of China’s leadership, while China in turn seems to be escalating its spat with Australia. Against that background Topix and Nikkei closed with losses of -0.2%, the Hang Seng lost -0.5% and the CSI 300 also -0.5%, while the ASX was down -0.4% at the close.

Technically, the UK100 continues to struggle on the higher time frames too, but there may be some signs of life. This week we have seen a breach and hold of both the 50-day moving average (5820) and the psychological 6000 level. The Parabolic SAR flipped from negative to positive, the 38.2 Fibonacci level was also broken, RSI tested 60 and the Bollinger Bands are starting to point north. The MACD however is neutral. The April high at 6170, the 6200 round number and the 50.0 Fibonacci level at 6,250 are the next resistance areas. 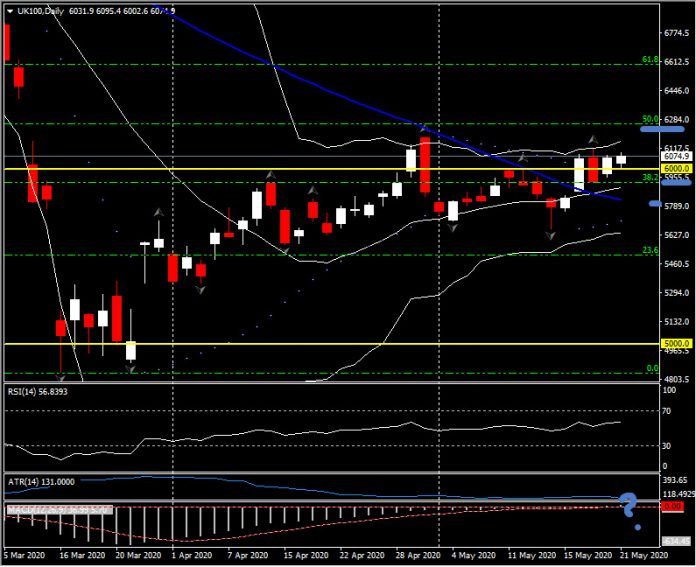