American futures pointed higher as investors reflected on the latest quarterly results by some of the biggest companies in the United States. Futures tied to the Dow Jones, S&P 500, and Nasdaq 100 index rose by over 0.50%. On Tuesday, Microsoft said that its revenue jumped by 20% in the fourth quarter to over $51.7 billion. Its net income rose by 21% to $18.8 billion, which was better than the median estimate of $17.5 billion. The company also issued better forward guidance. It expects that its revenue will rise to between $48.5 billion and 449.3 billion. The top companies to watch later today will be AT&T and Tesla.

The US dollar index retreated slightly as investors focused on the upcoming interest rate decision by the Federal Reserve. The bank will conclude its meeting later today and deliver its decision. Analysts expect that the bank will leave interest rates at the current range of between 0% and 0.25%. It will also slash the size of its quantitative easing for the third straight month. At the same time, the Fed will point to between three and four interest rate hikes this year as it battles with the rising inflation.

The price of crude oil bounced back as investors watched the ongoing tensions between western countries and Russia. Western countries have accused Russia of planning to invade Ukraine. The country has already mobilized over 100k military members near its border with Ukraine. Russia, on the other hand, has accused NATO of seeking influence in countries in Eastern Europe. According to the Financial Times, the US is preparing a slate of sanctions if Russia invades Ukraine. However, the risk is that Russia will retaliate by reducing the amount of natural gas and oil that it ships to Europe. Oil prices will react to the latest inventories data.

The XBRUSD pair tilted higher today. The pair is trading at 87.85, which is a few points below this year’s high of 88.78. The price is a few points above the key support at 84.30. It has also moved above the 25-day moving average while the MACD has moved above the neutral level. The Relative Strength Index (RSI) is moving sideways. Therefore, the pair will likely keep rising as bulls target the next resistance at 90. 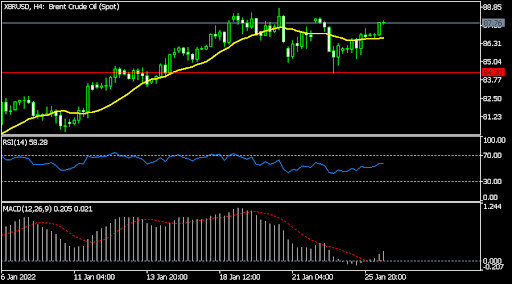 The EURUSD pair has been in a downward trend in the past few days. The pair is trading at 1.1281, which is substantially lower than this month’s high at 1.1484. The pair has moved below the 25-day and 50-day moving average. It has also fallen below the ascending trendline that is shown in yellow. The Relative Strength Index (RSI) has also dropped. Therefore, the pair will likely continue falling as bears target the key support at 1.1200. 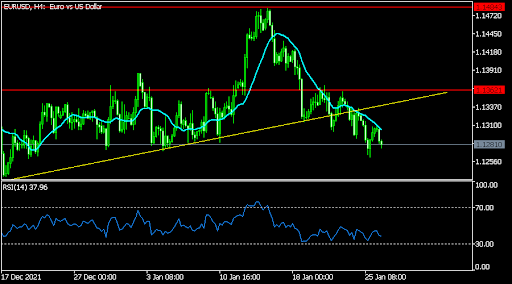 The GBPUSD pair rose to a high of 1.3520, which was the highest level since Monday this week. The pair has jumped from a low of 1.3440 and is slightly below the 38.2% Fibonacci retracement level. The pair is below the 25-day moving average. It has also formed a bearish flag pattern while the MACD is below the neutral level. Therefore, the pair will likely resume the bearish trend after the Fed decision. 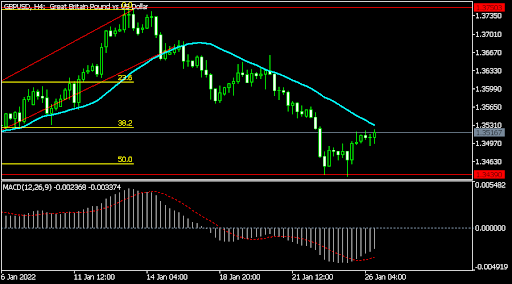