The euro and greenback rose versus the majors as the market continues to digest the fresh ECB measures taken to stimulus the economy and the better than expected Non-Farm Payrolls report. Moreover, the US dollar rose versus the majors on the fall of the oil prices to a six-year low following the OPEC change.The Organization of Petroleum Exporting Countries (OPEC) will stop limiting the output to 30 million barrels a day in order to control prices and are planning to pump around 31.5 million barrels per day according to the OPEC President. The Australian dollar plunged on weak data revealed during the weekend and the New Zealand dollar tumbled amid of the speculations that the RBNZ will cut interest rates on Wednesday’s policy meeting.

EUR continues to digest ECB stimulus measures
The euro traders are expecting the final GDP growth for the third quarter, which is expected to come in line with the preliminary figures, 0.3% quarter over quarter and 1.6% year over year. In US, the Business Confidence for November is expected to show an improvement while the Economic Optimism for December is forecasted to have slightly slowed down.

The euro edged lower during Monday’s session and early Tuesday as investors trimmed bullish bets on the single currency and locked in profits following the aggressive rally of 450 pips after the ECB policy meeting. An important day for euro lies ahead, with the eurozone to release its GDP Q3 figures following the expansion by 0.3% the previous quarter.

The EUR/USD pair came under pressure and tested the psychological level of 1.0800 (recommended level in yesterday’s strategic report http://bit.ly/21LuUMp), which coincides with the 4-hour 200-SMA. It seems that the dollar is slowly recovering from last week losses seen after the ECB policy meeting, however, it remains under a further pressure. It is very important that the euro bulls managed to hold the price above the 200-SMA and the 1.0800. 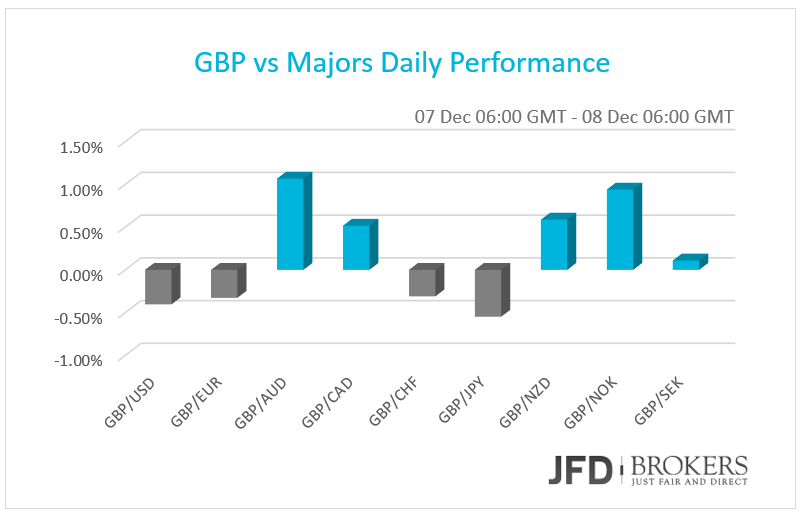 GBP subdued ahead of important economic news
No significant change to the sterling against most of the G10 currencies as the traders are cautious ahead of the BoE policy meeting on Thursday and the GDP growth release, later in the day. Though no change is expected to the monetary stance, the minutes will be watched closely to decipher the policymakers’ view on the economy. TheIndustrial and Manufacturing Production for October will be eyed today, as a considerable part of the economic growth is underpinned by these sectors, as well as to the NIESR GDP estimate for November.

Technically, the sterling bulls were unable to overcome the key resistance zone of 1.5140 – 1.5160 on Monday, and after a quiet Asian session it has remained under pressure, as it seems traders took profits and sold the pound following the aggressive rally from the psychological level of 1.4900. As it stands, having now broken below the 4-hour 50-SMA, the way for further declines appears to be open towards 1.5030 and then to the psychological level of 1.5000. The area between 1.5000 and 1.5150 is considered to be risky in order to determine the real direction of the trend. In fact, I expect any future movements on the exchange rate to be based more on fundamentals than technical factors.

The New Zealand dollar dropped severely against the other major currencies on the speculations that theReserve Bank of Australia will cut its benchmark interest rate on Wednesday to 2.5% from 2.75% as the Federal Reserve plans to tighten the monetary policy soon. The New Zealand inflation rate is one of the reasons the country’s central bank keep that dovish stance. During 2015, the consumer prices rose on average 0.4% far below last year’s average of 1.2%, on a yearly basis.

The NZD/USD has had an aggressive move lower since reaching its spike top of 0.6787 on Friday, and currently sits at session lows of 0.6625 ahead of the RBNZ policy meeting due Wednesday night. The key to watch for now will be the 0.6620, which includes the 1-hour 200-SMA, the 4-hour 50-SMA and the 200-SMA, as well as the daily 50-SMA. Below here, the short-term rising trend line is ready to provide a significant support to the price action in case of a pullback and I believe is likely to come in play later today or early tomorrow. On the upside, the 0.6685 level will be the next obstacle for the bulls.

The Japanese Yen haven’t managed to ramp against its major counterparts even though the country avoided a recession in the three months to September, according to the GDP figures released early on Tuesday. The second quarter the economy contracted by 0.1% and the preliminary figures supported one more consecutive quarter of contraction. However, the final figures revealed a growth of 0.3%. 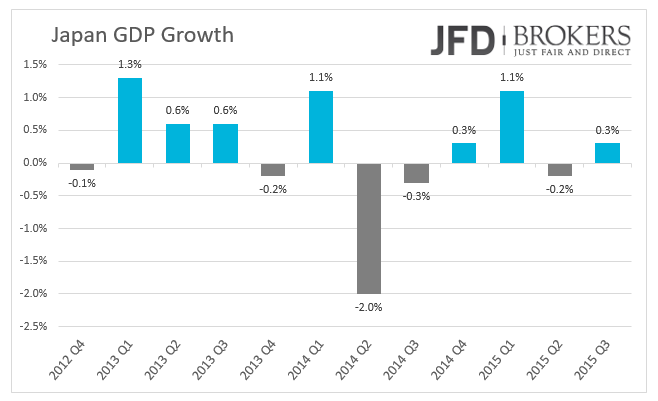 The USD/JPY pair has moved quietly during the Asian session, however, the dollar managed to maintain its gains against the yen, after it rebounded from the key support level of 122.20, which includes the 200-SMA. The pair is trading in a tight range between the 122.20 and 123.60 range with both the 4-hour 50-SMA and 200-SMA to provide a strong support near the 122.20 and 123.00 levels.

The tops and the bottoms of trading ranges are very difficult to identify, as well as support and resistance levels inside the channels. Unfortunately, trading ranges are very difficult to trade profitably. Therefore, as long as the price is trading between the aforementioned levels we remain neutral as we expect the pair to continue trading in this range for the coming weeks or until the Fed meeting in mid-December.

The precious metal surged the previous week halting a six-week losing streak following the strong rebound from the $1,046 level and the exit from the sideways channel (4-hour chart). Gold is now moving slightly below the key level of $1,073, which coincides with the 4-hour 50-SMA. Going forward, there is a clear battle going on above the key level of $1,070 and if the bulls manage to maintain the price above the latter level could show further bullish signs, prompting a more aggressive move towards the key level of $1,090. The 50-SMA on the 4-hour chart and the $1,065 level are continuing to provide support below while the 1-hour 50-SMA and the $1,082 will be the first hurdles for the bulls. For the medium term holders, even though the outlook is negative, I would expect the price to test the psychological level of $1,100, at least before the Fed meeting due mid-December.

The dollar surged above the 50-SMA against the Turkish lira on the daily chart and managed to maintain the bullish movements above the key level of 2.8750 after a report a report by the European Bank for Reconstruction and Development, which estimates Turkey’s GDP growth may be reduced by between 0.3% and 0.7%. TheUSD/TRY is grinding its way higher in the face of the Russia’s sanctions, following last month’s downing of a Russian military jet by the Turkish air force. However, the main pressure point which hurts Turkey is energy since Russia is Turkey’s number one supplier, providing more than half of its natural gas.

Technically, I would expect the pair the pair to come under a further buying pressure and to test the psychological level of 2.9500. Above there, the next key level to watch will be the 2.9800. The 50-SMA lies above the 200-SMA, keeping the outlook of the pair positive at the moment. 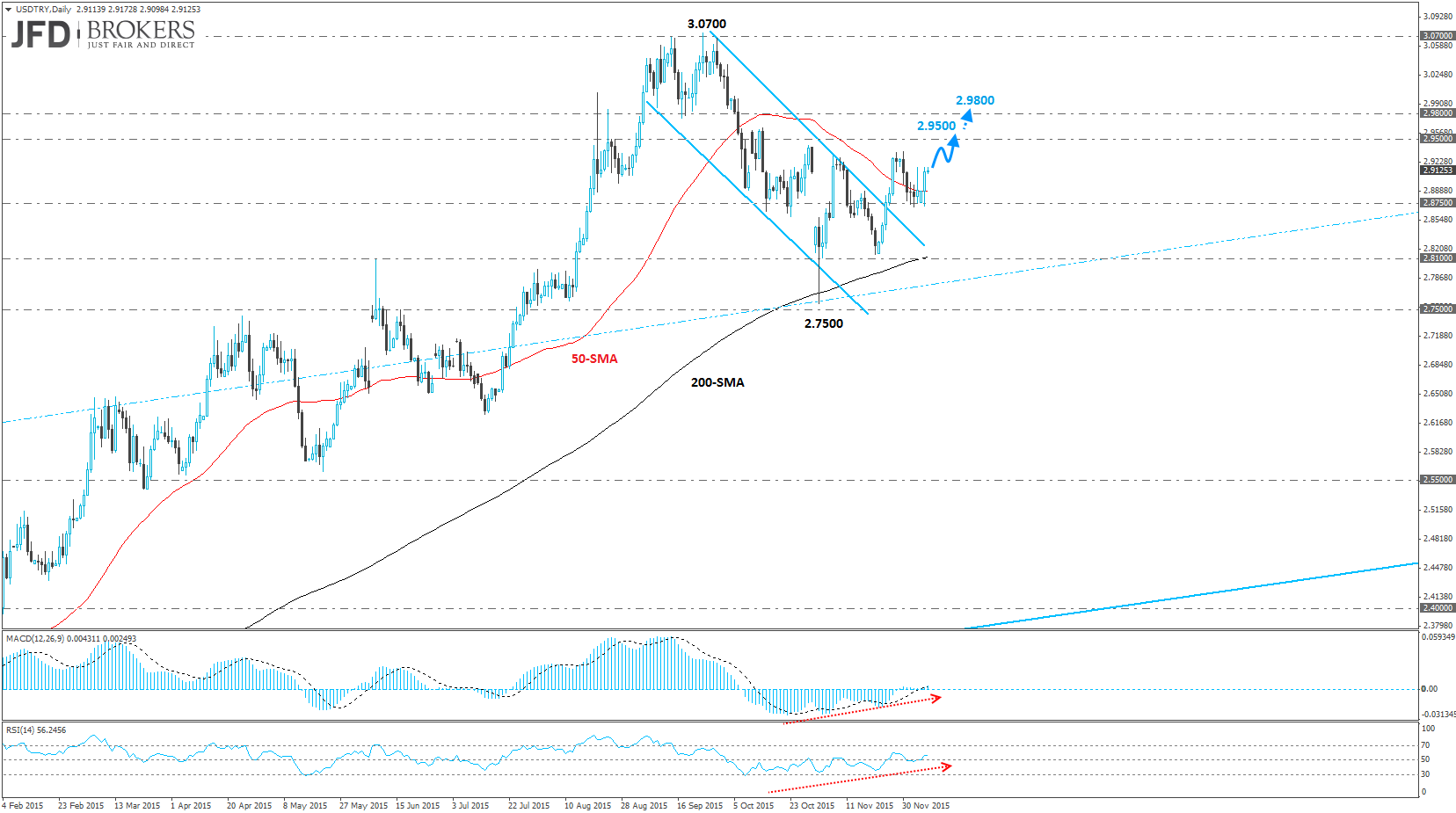 Oil prices plunged more than 4% after OPEC Oil prices plunged by more than 5% after the OPEC’s meeting on Friday which failed to result in agreement on output targets. The OPEC will keep pumping about 31.5 million barrels a day. Crude oil closed at its lowest level since February 2009. West Texas Intermediate (WTI) crude fell 5.8% to $37.61 a barrel while UK Brent oil plunged more than 4% to end the day around the psychological level of $40.00. Note that, Oil prices has slumped more than 50% since Saudi Arabia led OPEC’s decision in late 2014 to maintain output. Asian equities and U.S. indices traded firmly in the red on Monday and Tuesday on the back of the lower oil price.

The fact that oil price is breaking through some significant obstacles provides clues that further downside could be yet to come and a close below $40.00 for the Brent and $37.00 for WTI would be a bearish indicator.

The US indices gave up some of the gains recorded on Friday on the sharp fall of the oil prices. The energy sector was the worst performed sector on Monday following OPEC decision to abandon the strategy to limit output in order to control the oil prices. Dow Jones edged 0.66% lower, more than 100 points down, with Chevron Corp (NYSE: CVX) and the Exxon Mobil Corporation (NYSE: XOM) with losses around 2.6% each. Nasdaq dropped by 0.79% while S&P500 dragged down 0.70%, mostly by Consol Energy Inc. (NYSE: CNX) that plunged 15.3%. Other energy related stocks like Williams Companies Inc. (NYSE: WMB), ONEOK Inc. (NYSE: OKE), and Devon Energy Corp (NYSE: DVN) are among the top five worst-performed stocks contained in S&P500 with losses above 10%.

Economic Indicators
During the European morning, the final GDP growth is expected to show a moderate expansion by 0.3% in Q3, slightly below last quarter’s 0.4% growth. Note that Eurozone’s economic growth slows down for a steady expansion of 0.4%, quarter over quarter, the first two quarters of the year. 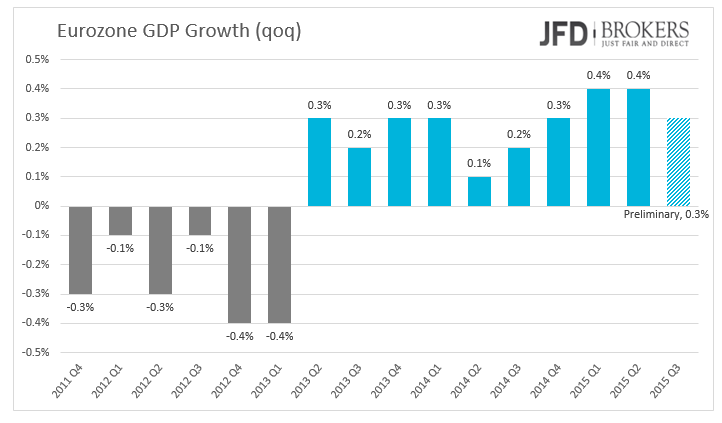 Going to UK, the Manufacturing and Industrial Production for October will attract some interest. Later in the day, the GBP traders will remain tuned for the GDP growth for the three months to November. 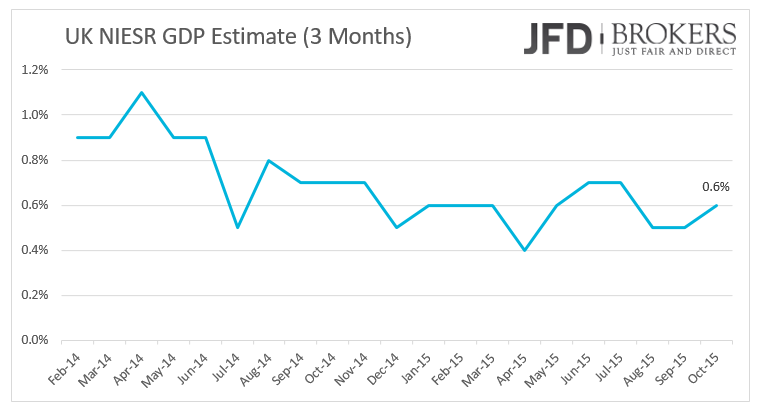 The content we produce does not constitute investment advice or investment recommendation (should not be considered as such) and does not in any way constitute an invitation to acquire any financial instrument or product. JFD Group, its affiliates, agents, directors, officers or employees are not liable for any damages that may be caused by individual comments or statements by JFD Group analysts and assumes no liability with respect to the completeness and correctness of the content presented. The investor is solely responsible for the risk of his investment decisions. Accordingly, you should seek, if you consider appropriate, relevant independent professional advice on the investment considered. The analyses and comments presented do not include any consideration of your personal investment objectives, financial circumstances or needs. The content has not been prepared in accordance with the legal requirements for financial analyses and must therefore be viewed by the reader as marketing information. JFD Group prohibits the duplication or publication without explicit approval.

72,99% of the retail investor accounts lose money when trading CFDs with this provider. You should consider whether you can afford to take the high risk of losing your money. Please read the full Risk Disclosure: https://www.jfdbank.com/en/legal/risk-disclosure