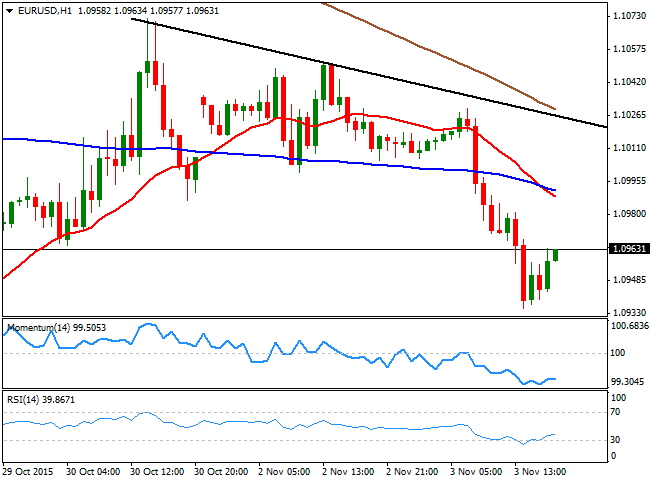 Financial markets posted quite mixed results  this Tuesday, with steady losses in the EUR and the JPY against the greenback, oil prices surging to fresh 3-week highs, and gold plummeting to a 5-week low, being the most notable developments. Dollar's demand started in the European morning, although the lack of fundamental data kept rallies limited. But as US traders reached their desks, and the country released macro data,  the movements gained momentum. The  ISM New York Index resulted at 65.8 in October, from a previous 44.5 leading to a dollar rally all across the board that pushed the EUR/USD pair down to 1.0935. The greenback, however, eased as factory orders fell for a second straight month in September, down by 1.0% after a downwardly revised 2.1%  drop in August, which helped the pair to bounce back towards the 1.0960 level, where it stands by the end of the day.

The EUR/USD pair is clearly bearish, ever since the imbalance between both Central Banks became more clear after their respective October meetings, and this latest break below 1.1000 support a continued decline ahead, albeit limited, as investors will be waiting for Friday's US NFP release to define whether they can resume EUR selling.  Short term, the 1 hour chart shows that the price remains well below a strongly bearish 20 SMA that is crossing below the 100 SMA, whist the technical indicators are bouncing from oversold levels, rather reflecting the latest recovery than suggesting bullish strength. In the 4 hours chart, the Momentum indicator presents a bearish slope below their mid-lines, whilst the RSI hovers in negative territory and the price stands below its 20 SMA, all of which supports further declines. 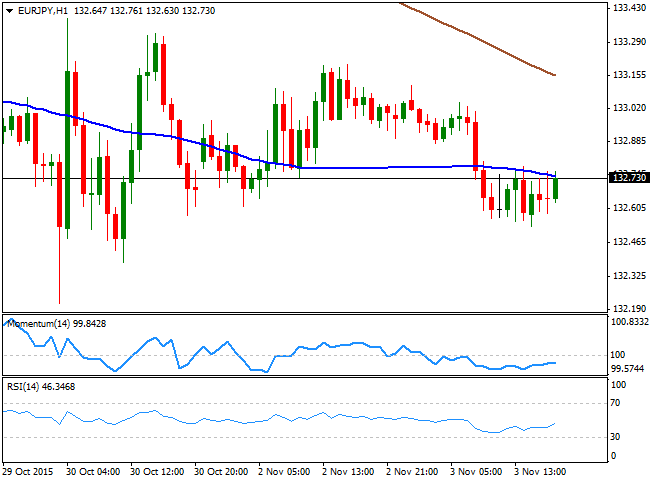 The EUR/JPY pair has shown little progress this Tuesday, having been confined to a tight range right below the 133.00 figure for most of the American afternoon, as both currency presented correlated moves against the greenback. The technical picture for the pair  has turned short term bearish, as in the 1 hour chart, the price is being capped by its 100 SMA, whilst the technical indicators present a mild negative tone below their mid-lines, lacking bearish strength at the time being. In the  4 hours chart, however, bears seem to have taken the lead, as the Momentum indicator heads sharply lower below the 100 level, whilst the 100 SMA is accelerating south below the 200 SMA, both well above the current level. 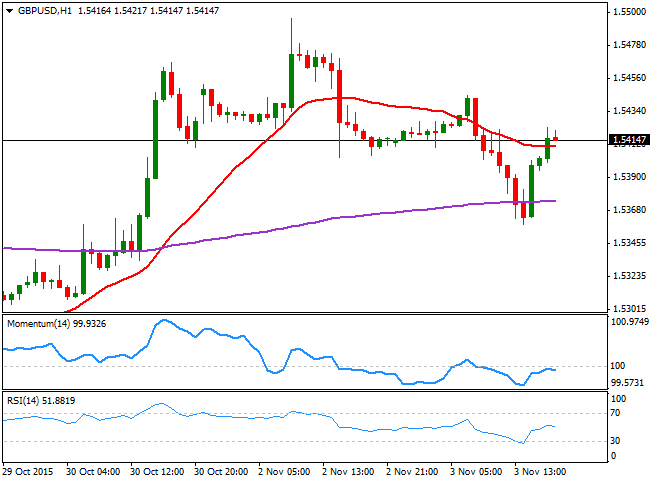 The GBP/USD pair closed the day flat around the 1.5415 level, after finding strong buying interest on a dip towards 1.5358. Earlier in the day, the UK Construction PMI for October matched expectations, printing 58.8, reflecting the UK economy continues growing at a firm pace. The Pound advanced up to 1.5446 following the release, but the succumbed to dollar's buying, falling down to a daily low of 1.5358 before finally recovering. The British Pound is less sensible to dollar's gains, given that any strength of the American currency is generally backed by speculation the US Federal Reserve will raise rates before the year end, but is well known that the BOE will likely follow. The 1 hour chart shows that the price has managed to recover above its 20 SMA, but that the technical indicators have retreated from their mid-lines, limiting chances of additional advances. In the 4 hours chart, the price is extending above a bullish 20 SMA, while the Momentum indicator has crossed its mid-line towards the downside, and the RSI hovers around 55, in line with the shorter term view. 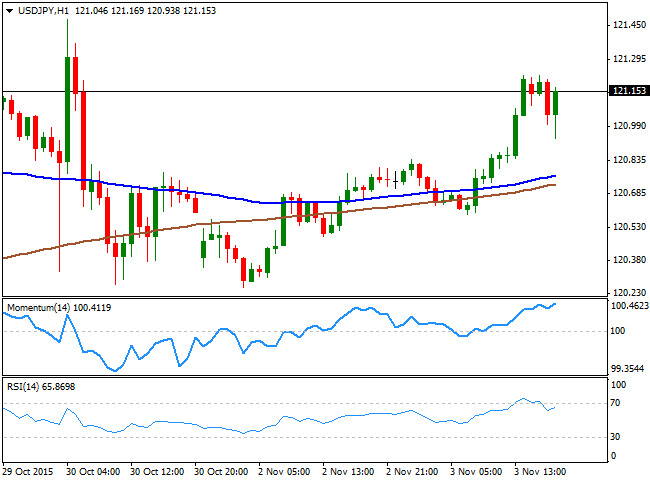 The USD/JPY pair advanced up to 121.22 this Tuesday, finding intraday buying interest on dips down towards the 121.00 figure in the American afternoon. The rally began before the release of the US impressive New York ISM index, and was later supported by a strong advance in US stocks, as the DJIA is flirting with the 18,000 level ahead of the close. The pair retains a strong bullish tone ahead of the Asian opening, as the 1 hour chart shows that the technical indicators have resumed their advances well above their mid-lines, and following a limited downward corrective move, whilst the 100 and 200 SMAs, are gaining bullish slopes below the current price. In the 4 hours chart, however, the upward momentum faded according to technical readings as the technical indicators have turned slightly lower, despite holding well above their mid-lines. The pair has a major resistance level around 121.45, its 200 DMA, as the level has capped the upside ever since late August, meaning a break above it could trigger large stops, and result in a strong upward continuation towards the 122.00 region. 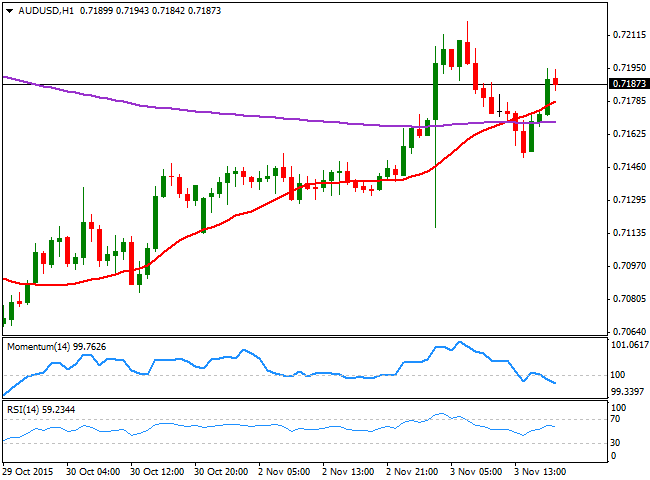 The Australian dollar ends the day with gains against its American rival, with the pair however, far from its daily high of 0.7218 achieved during the past Asian session after the RBA meeting outcome. The Australian Central Bank  said that  that economic conditions had “firmed a little” in the past few months, whilst maintaining its main benchmark unchanged at 2.0%. The pair fell down to 0.7150 mid American session, but quickly recovered ground after tepid US Factory Orders data, now capped by the 0.7200 figure. The technical picture is mildly positive, as the 1 hour chart shows that the price is above a bullish 20 SMA, whilst the RSI indicator holds around 60. The Momentum indicator however, in the same chart, heads lower below the 100 level, limiting the upside at the time being. In the 4 hours chart, the upside seems more constructive, as the intraday decline was contained by a bullish 20 SMA, whilst the technical indicators hold above their mid-lines, yet with  a limited upward tone at the time being.