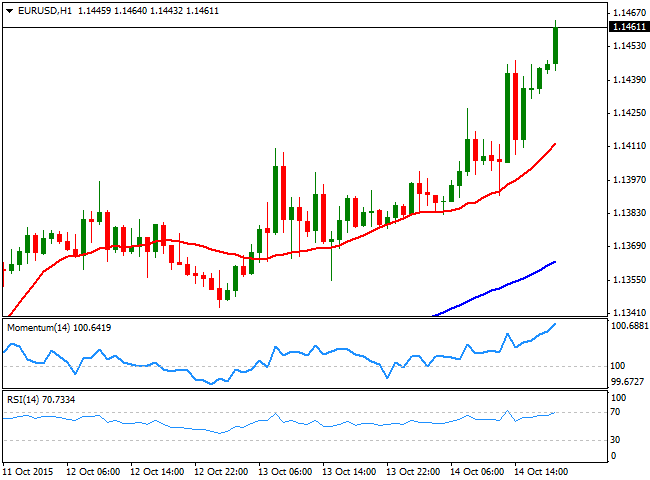 The dollar edged sharply lower this Wednesday, with the EUR/USD pair reaching fresh daily highs ahead of the US close, and holding in the 1.1460 region. The common currency was on demand ever since the European opening, as poor Chinese inflation readings spurred demand for the common currency earlier in the day, sending the pair above the 1.1400 level. There were some minor releases in the EU, including the region's industrial production data for August, which fell by 0.5%. But it was worse-than-expected US data, which triggered a dollar's sell-off all across the board, as in September, the producer price index fell by 1.1% compared to a year before, whilst the core reading, excluding food and energy, reached 0.8% against expectations of a 1.2% advance and 0.9% previous.

Technically speaking, selling interest has capped rallies around the current level  since May this year - dismissing the Black Monday high of 1.1713 - which means that if the level is broken, the rally can extend over the upcoming sessions. The short term picture is bullish, despite the technical indicators are in overbought territory in the 1 hour chart, but there are no signs the pair may change course any time soon. In the same chart, the price is well above its moving averages, all with strong bullish slopes, supporting further advances. In the 4 hours chart, the RSI indicator heads higher around 80, while the rest of the technical readings are in line with a continued advance. Nevertheless, some downward corrective movement should not be disregarded, with buyers most likely surging on approaches to the 1.1400 figure. 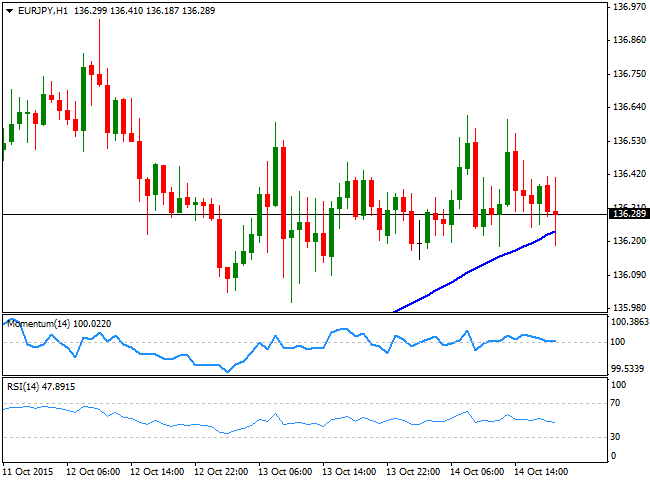 The EUR/JPY pair has shown little progress this Wednesday, trading range bound within a tight range, as both, the EUR and the JPY rallied against the greenback. The pair is closing the day with a doji for a second day in-a-row, lacking directional strength. Short term, the 1 hour chart shows that the price is holding a few pips above a bullish 20 SMA, whilst the technical indicators are turning slightly lower around their mid-lines, presenting a neutral stance at the time being. In the 4 hours chart, the price remains well above its 100 and 200 SMAs, whilst the Momentum indicator is flat below its 100 level, and the RSI indicator heads lower around 54, maintaining the risk towards the downside, particularly on a break below 135.90, the immediate support. 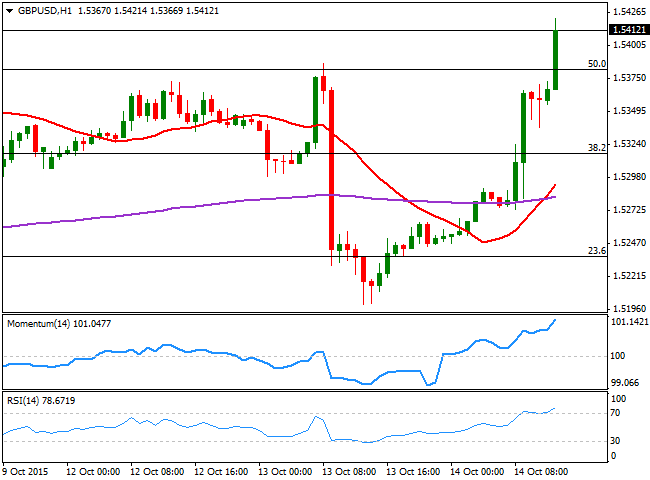 The GBP/USD pair advanced nearly 200 pips this Wednesday, and reaching a fresh 3-week high of 1.5472. In the UK, mixed employment data showed that  employment rose 140,000 in the three months to August while unemployment fell 79,000 resulting in an unemployment rate of 5.4%, its lowest in seven years. Wages missed expectations, but growth above previous month readings, with the average weekly earnings up 3% yearly basis. The pair initially fell with the headline, but markets' player quickly realized that solid wages along with lower inflation should give local consumption a nice boost over the upcoming months, putting back on the table a possible rate hike. The 1 hour chart shows that the pair is now advancing beyond the 61.8% retracement of its latest daily decline at 1.5445, now the immediate support, whilst the technical indicators continue heading higher, despite being in extreme overbought territory. In the 4 hours chart, the technical indicators maintain their bullish slopes well into positive territory, in line with the shorter term picture and with additional gains for this Thursday. 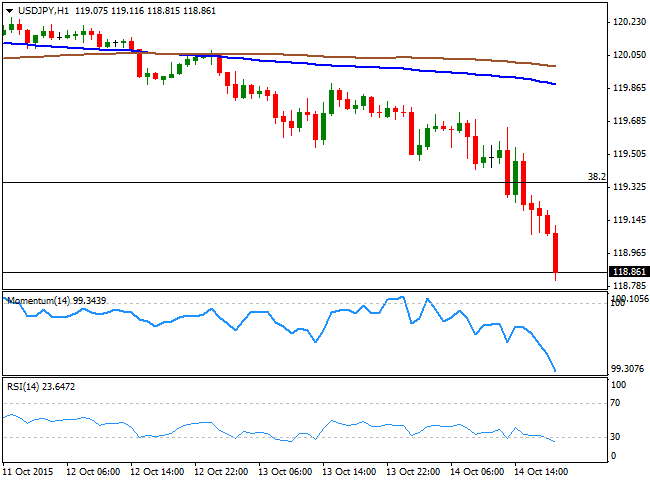 The Japanese yen accelerated its rally in the American afternoon, leading to a USD/JPY decline down to the 118.80 region before the US closing bell. The pair posted a mild decline during the Asian session, following the release of Chinese inflation data for September, much worse than expected as the CPI rose by  0.1% compared to the previous month, when it rose 0.5%, whilst yearly basis, inflation was up 1.6% from the previous 2.0%. Trading at its lowest since October 2nd, the 1 hour chart shows that price holds well below its moving averages, and below the 38.2% retracement of its latest weekly decline at 119.35, while the technical indicators maintain their strong bearish slopes and are currently entering oversold levels. In the 4 hours chart, the technical indicators also present strong bearish slopes, despite being in oversold territory, supporting a bearish continuation, particularly as there are no buyers around, with the price holding steady near its low. The immediate support comes at the 118.50/60 region, from where the pair has bounced several times since late August. Should the pair extend below this area, the downside is open for a retest of the 116.13, the low posted last August. 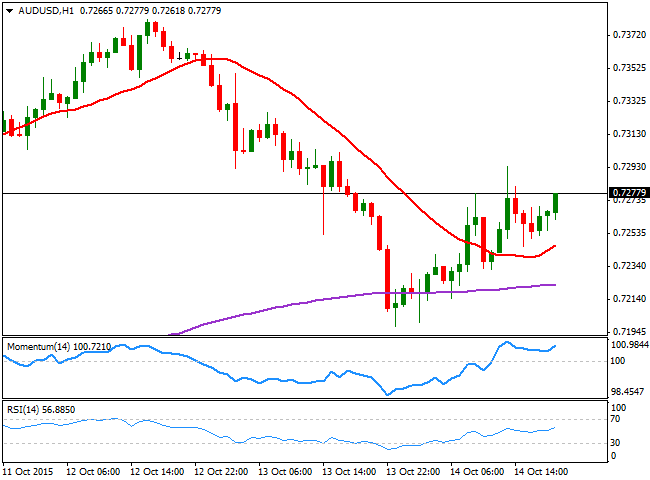 The AUD/USD pair recovered half of its Tuesday's losses, despite an early test of the 0.7200 figure following disappointing Chinese inflation figures. The Aussie got a boost from gold, as spot price advanced up to $1,188.36 a troy ounce, its highest since mid June. Nevertheless the Australian dollar is the worst performer against the dollar daily basis, capped by the 0.7300 level. Technically the 1 hour chart however, supports additional gains, as the price is now above a bullish 20 SMA, whilst the technical indicators recovered their bullish slopes, and head north above their mid-lines. In the 4 hours chart, the technical indicators present tepid positive slopes, but well below their mid-lines, while the 20 SMA heads slightly lower around the mentioned 0.7300 level, being the level to overcome to confirm a continued advance during the upcoming sessions.

AUD/USD rides the reflation wave higher. The aussie reaches the highest since February 2018. Surge in commodities complex underpins the AUD.