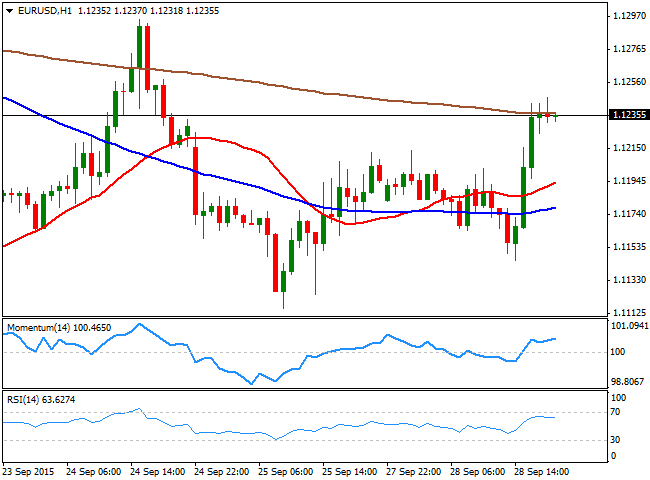 A dull Monday ended with the safe-haven currencies generally higher and the dollar mixed across the board, with the EUR/USD advancing up to 1.1247 in the American afternoon, and having spent the rest of the day consolidating nearby. Financial markets were all about sentiment this Monday, with increasing fear of Chinese economic slowdown spreading worldwide leading the way.

Data coming from the US was soft, as the PCE figures for August showed that personal income shrank to 0.3%, while spending rose to 0.4%. Monthly basis, the PCE price index came out at 0.0%, but advanced to 1.3% from previous 1.2% yearly basis. Pending home sales retreated in the same month, down 1.4% against expectations of a 0.5% advance. FED's officers fueled uncertainty, with Dudley stating that he expects the FED to hike later this year, but saying that will depend on upcoming data. Chicago FED's Evans on the other hand, resulted quite dovish, saying that he prefers a later lift-off to avoid the risk of lowering inflation.

Technically, the short term picture for the EUR/USD pair has turned slightly positive, although the pair stalled its intraday advance around a key static resistance level. But the 1 hour chart shows that the price is hovering around its 200 SMA after accelerating above the 100 and 20 SMAs, whilst the Momentum indicator heads slightly higher above the 100 level and the RSI indicator advances slowly around 64. In the 4 hours chart the price advanced above its 20 SMA, now offering an intraday support around 1.1200, whilst the RSI indicator turned north and advanced beyond 50 supporting additional advances towards the 1.1335 region for this Tuesday, on renewed demand beyond the mentioned daily high. 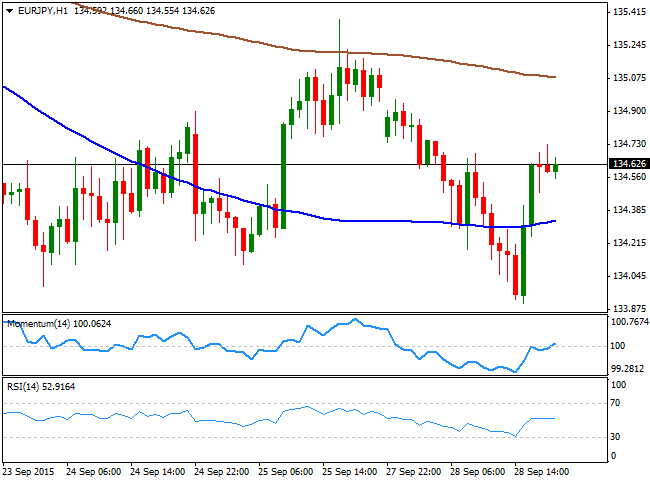 The EUR/JPY pair ended the day with limited losses, as the yen was on demand amid sliding stocks, but the EUR also surged against the greenback. Asian shares came under pressure on poor Chinese data, as in the country, industrial profits fell 8.8% in August from a year before, outpacing July's decline of 2.9%.  Fears of a global economic slowdown spread among worldwide indexes, which resulted in a firm demand of the safe-haven yen. The pair traded as low as 133.90 intraday, but managed to recover to end the day above its 200 DMA, currently around 134.40. Shorter term, the 1 hour chart shows that the technical indicators have recovered from oversold readings, but turned flat around their mid-lines, as the price meets selling interest on approaches to the 135.00 level. In the same chart, the price is back above its 100 SMA that anyway remains horizontal, lacking directional strength. In the 4 hours chart, the Momentum indicator is flat around its 100 level whilst the RSI aims slightly higher around 48 and the price develops below its moving averages, all of which maintains the risk towards the downside. 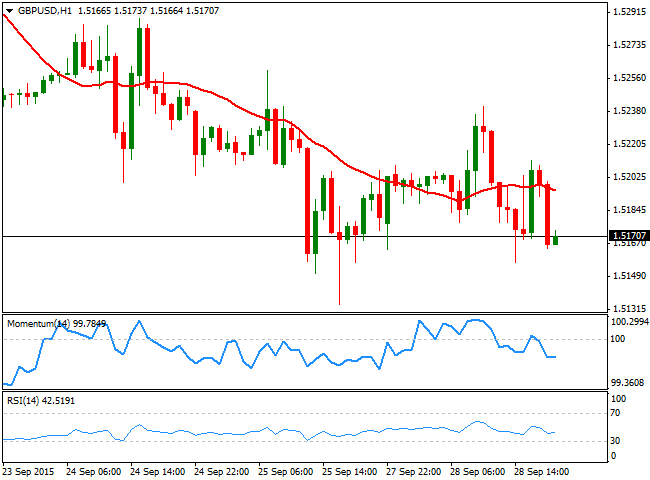 The GBP/USD pair ended the day in the red, after an early attempt to correct higher met selling interest at 1.5240, the daily high achieved after the European opening. There were no fundamental releases in the UK, but for this Thursday, BOE's Governor Carney is scheduled to speak, whilst the kingdom will also release its mortgage and money readings for August. The pair has been pretty much consolidating its latest losses, and the 1 hour chart shows that  the price has briefly advanced above its 20 SMA before returning below it, whilst the technical indicators lack directional strength, but remain in negative territory. In the 4 hours chart, the 20 SMA capped the upside and currently offers and immediate resistance around 1.5210, while the Momentum indicator heads lower below its 100 level and the RSI indicator hovers around 34, all of which supports additional declines, particularly on a break below the 1.5120 support. 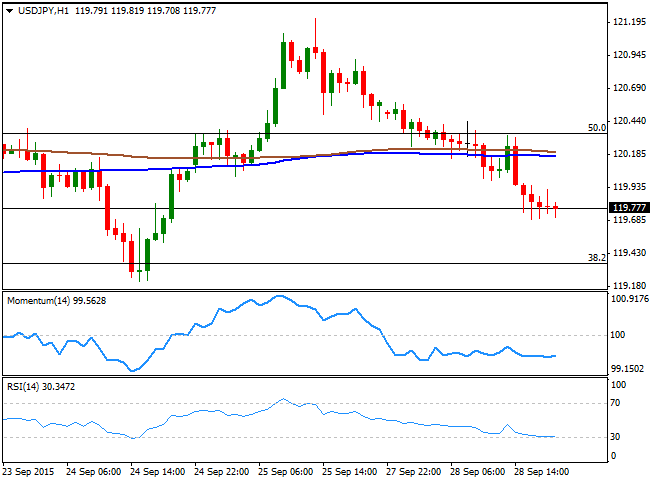 Downward momentum to extend below 119.35. The USD/JPY pair fell down to 119.69, and trades a few pips above it ahead of the Asian opening, having been under selling pressure ever since the day started. Sill trading within its usual range, the pair fell as risk aversion dominated investors all through the day, with the yen appreciating as stocks plunged. The short term picture shows that the 100 and 200 SMAs in the hourly chart are horizontal and within a 10 pips range around 120.10/20, a clear reflection of the ongoing range, whilst the technical indicators are losing their bearish strength, with the RSI indicator holding near oversold territory. In the 4 hours chart, the Momentum indicator has bounced from its mid-line, but remains in neutral territory, whilst the RSI heads sharply lower around 42, anticipating additional declines, particularly on a break below 119.35 a strong Fibonacci support. 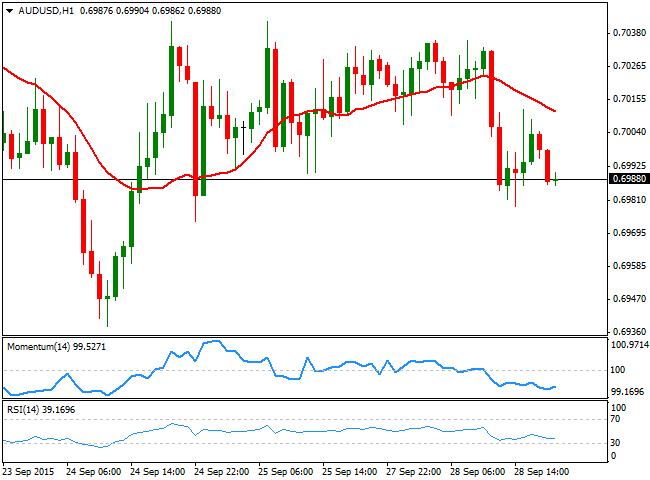 The Aussie could not cope with commodities' decline and broke below the 0.7000 figure against the greenback, extending its intraday decline down to 0.6978 before bouncing back before the end of the day. During the upcoming Asian session, Australia will release some credit and housing data, which if negative, may send the pair back to its recent lows near the 0.6900 level. In the meantime, the pair will remain sensitive to Chinese data and stocks movements. Technically, the 1 hour chart shows that the price is now developing below a bearish 20 SMA, whilst the technical indicators have lost their downward strength, but remain well below their mid-lines. In the 4 hours chart the price is back below a bearish 20 SMA after failing to rally above it earlier in the day, whilst the Momentum indicator turned sharply lower and is currently breaking below its 100 level, and the RSI indicator heads lower around 40, all of which supports a bearish continuation for the upcoming sessions.