“Anyone who spends too much time thinking about international money goes mad.”

No; that wasn’t a mistake.  We meant it could be time to buy the euro.  Say what?  This view is predicated on two rationales (or made the word “conjectures” fits better):

Today’s ugly PMI data from Germany confirms current account surplus countries are generally hit harder during global economic slowdown. We say that because current account surplus countries are more dependent on export growth to drive GDP, whereas current account deficit countries rely more on domestic demand for their growth (e.g. the US and UK are primary CA deficit countries).
Though everyone wants to export more, export-driven growth (aka the Asian growth model) often comes directly at the expense of domestic consumers (explicit as it relates to Asia, implicit as it relates to Germany).  Current account deficit countries often seem imports as “staling their domestic demand.”  In fact, this was the G-20 complaint against Germany during the great credit crunch of 2007-08; Germany rode on the back of US and China fiscal stimulus and did little of its own looking to increase global export market share.

Germany is the big daddy of current account surplus nations by design.  German industrial giants drive policy.  Below is a chart showing the quarterly current account surplus numbers for Germany expressed in billions of euro.  As you can see, the last time there was a little hiccup was during the credit crunch as mentioned above.  And of course, we are seeing a hiccup now as the US-China trade war heats up and dents global trade flow. 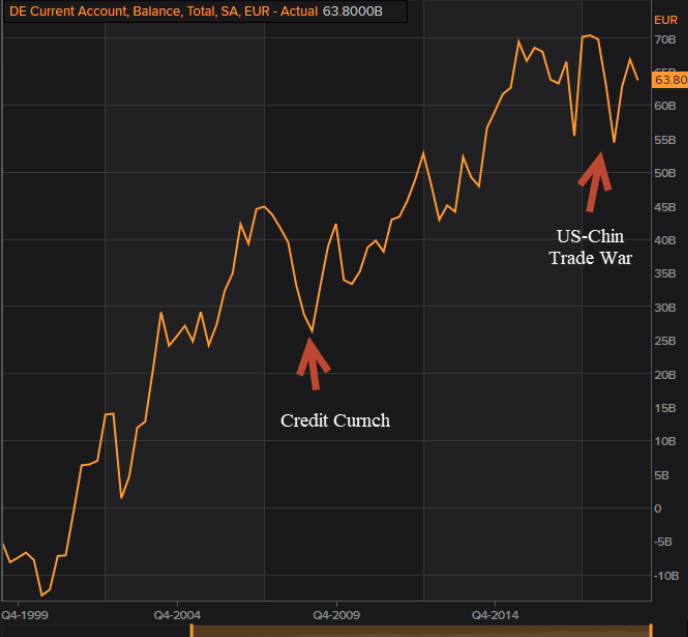 So, given this export dependency, it is no surprise Germany is feeling pain and produced recession-level PMI numbers this morning, with an ugly 41.4 posted for September.
Evidence of the drag from exports is apparent when comparing German growth to the UK—which as said is a major current account deficit country.  The UK is growing faster than Germany despite the UK being every analysts top basket-case country (we think that says something about the longer term undervaluation of the British pound which we will cover in upcoming issue).

Below is a chart of European countries CA balances through Q2 2018—the same period reflected in the chart above.  You can see Germany’s surplus a whopping 63.8 billion euro for Q2 (UK at whopping 20.7 billion deficit and helps explain why there is still a chance of an orderly Brexit). 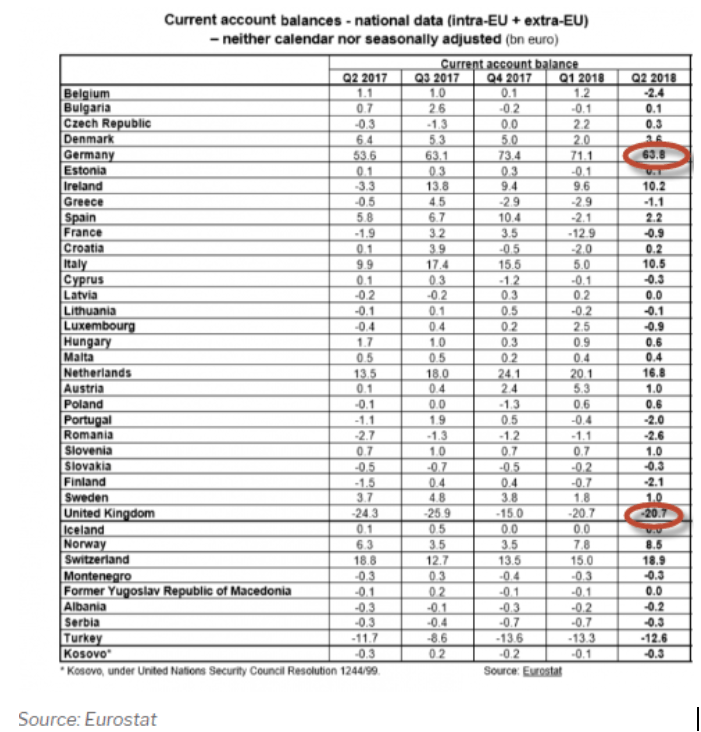 This is not to say everybody should be running a current account deficit to generate growth.  But it is to say with globalization now running in reverse, deficit countries relying more on domestic demand for growth tend to be shielded relative to those relying primarily on exports.

I think you can see where this is going.  And it should be no surprise.  It is time for Germany to open up the fiscal floodgates if it wants to maintain growth in its economy.  Mr. Draghi said, or pleaded, as much at the latest ECB meeting.  He gave the EU one last shot of monetary juice, but he made it very clear there are limits to monetary policy and it has likely been reached.

This sets the stage for Christine Lagarde, the incoming ECB President and all-around global institutional heavyweight; she has an impressive resume.  What she lacks in a Stanley Fischer trained Ph.D., she makes up for with an advanced degree in behind the scenes schmoosing at the highest levels.

Our premise: She is talking up fiscal stimulus to every top-dog and -cat across Europe, especially in Germany.  And given the German’s seeming “outrage” with Mr. Draghi’s latest stimulus, pushing rates further into negative territory and slamming German savers (part and parcel to the point Germany uses its export to grab demand from other countries), it seems the ECB has reached the end of its monetary policy ropes and Miss Lagarde job is to promise Germany no more stimulus from the ECB in turn for them doing their part on the fiscal front.

There is a general rule for currencies: Tight monetary and loose fiscal policy tend to be good for a currency.  Tight monetary policy provides relative yield (pulling in hot money), and fiscal stimulus provides growth (bringing in Foreign Direct Investment).  These are the two primary drivers of a currency over the intermediate-term time frame.

Granted, to say the ECB is done with monetary stimulus at this level is not to say yields will surge in Europe.  But it is to say relative yield expectations could easily surge higher on a growth surprise driven by fiscal stimulus.

EUR/USD Daily: The implication here is the euro has put on major corrective low against the US dollar and did so in a wedge terminal pattern, which often is the precursor to a violent change in trend…of course the alternative is a push through the 1.0924 low, trigger more selling.  Risk-reward here seems pretty good if you have a decent time-frame… 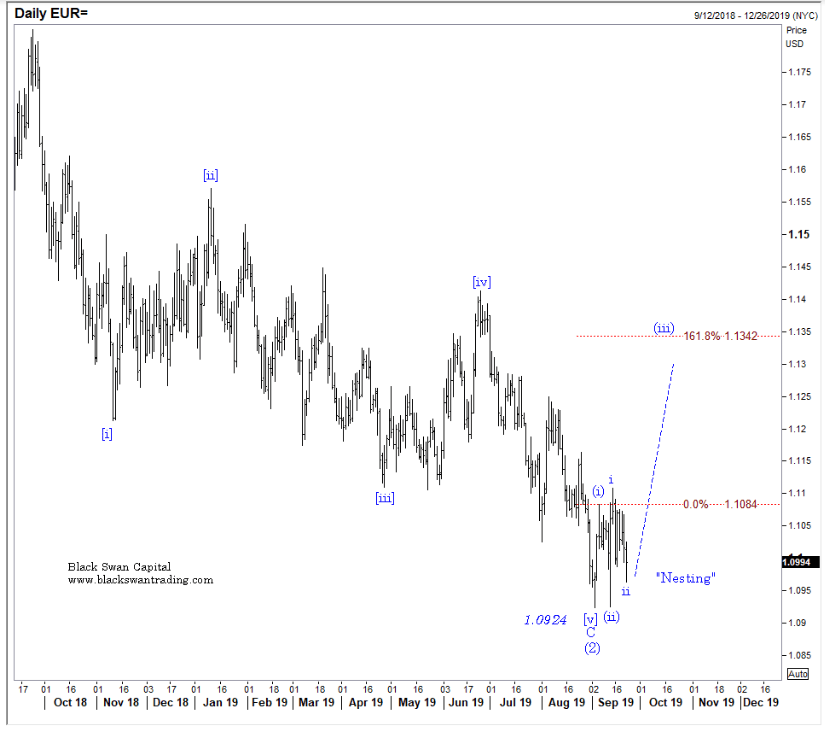