We get the advanced goods trade number today (brace yourself, it will be bad) and all those earnings reports, but the main event is the Fed statement. Not a soul expects the Fed to change anything, with special attention to the key words and phrases like “some time” and “substantial progress.” Fed chief Powell may mention “turning point” or its equivalent but on the whole, the Fed meeting is a non-event.

One thing Powell will not mention is the newly rising yields, based on newly rising inflation fear. The 10-year is up from 1.518% on March 10 to 1.64% this morning and 1.58% just yesterday. It might be headed for a test of the 52-week high at 1.778%. Gittler at BD Swiss notes that the 10-year breakeven inflation rate is up to 2.39%, not much in terms of points but the highest level since April 2013. Morgan Stanley names it “bear steepening.”

The yield rise means the bond vigilantes are getting back on the warpath. They are turning away from the Fed narrative (inflation transitory and smallish) and returning to the fear factor–inflation is coming! Inflation is coming! Analysts point to rising prices due to supply chain blockages, commodity price rises, even house price inflation. Here is a paragraph from the WSJ that feeds inflation fear:

“China’s surging imports of metals, grain and other commodities are providing a boost to a bulk-shipping sector at the center of global industrial production. Daily freight rates for capesize ships, the largest bulk carriers, jumped to an 18-month high this week at around $35,000 and the Baltic Dry Index, which tracks the cost of moving commodities by sea, pushed to a 10-year high of 2,808 on Monday. The rebound follows a steep decline early last year as factory production crumbled at the start of the pandemic. China now is stepping up its investment in industrial production to fuel economic growth, and consumer demand in Western economies is growing stronger. China is the world’s biggest commodity importer, making up roughly 45% of maritime’s dry-bulk market, and shipping executives say the run looks set to last into the summer….”

See the chart of the Baltic Dry Index. The TradingEconomics note says “The Baltic Dry Index rose 2.9% to an over ten-year high of 2,889 on Tuesday, extending gains for a tenth straight session, closely linked to the strong performing Brazilian iron ore exports as key markets such as China replenish supplies that were drawn down in the year of the pandemic.” 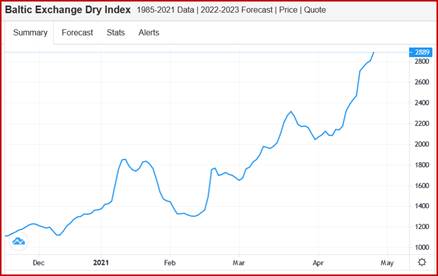 More than one counts the rising number of times the words inflation or rising prices received a mention in the earnings reports. About house prices–Case Shiller has a gain of 12% y/y and Wolf Street complains this doesn’t get into the CPI, which uses rents instead. He names it a second housing bubble and the chart seems to bear out that label, at least in some cities like Los Angeles (and San Francisco, Portland, Seattle, Washington, DC, Miami, and others). Wolf Street may be right–Feb saw the biggest rise at an annual rate since February 2006. 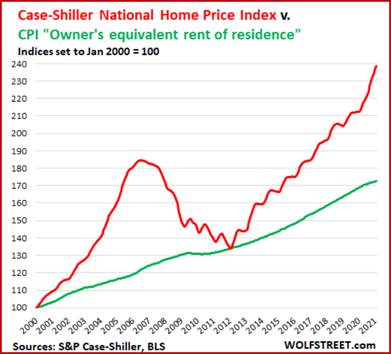 While it’s perfectly true that commodity prices are rising (oil, copper, lumber) and the critical undersupply of semiconductors is big deal in a tech-y economy, we do not actually know how much these inputs contribute to the pricing of final goods. After all, the US is largely a service economy and your pizza does not contain copper, lumber or microchips.

In addition, let’s not forget that the Fed is prioritizing job growth and especially equitable job growth. It has put inflation in the back seat.

So, US inflation may be imaginary so far and secondary in the Fed’s mindset, but that never stops the bond boys. Do we get a return to 1.778% and beyond? We had thought bond market capitulation to the Fed would give us 1% before 1.778% again, but the jury is still out. Note that in currencies, the USD/JPY has a near-perfect positive correlation. This is not always the case and you can’t count on it, but yesterday it was screaming off the charts.

This somewhat confusing state of affairs leaves us with the big-picture macro forecast of falling dollar over several months to come vs. a near-term correction to the upside that can get out of hand. Choose your currencies to trade wisely.

Tidbits: The Republican party and its poodle, Fox News, is promoting the most pathetic lies about the Biden administration. Biden is banning meat, for example. People who see neighbors on the street with masked children should call the police and report child abuse. This might get them arrested for wasting police time, which would be fine. TV pundits point out that if this is all they have, the Republicans are out of ammo.